Information on the transfer of toxins through food webs, toxic doses, and health effects on wildlife remain a critical knowledge gap for the Arctic and Subarctic regions.

As the climate has warmed over the past few decades, the Pacific sector of the Arctic Ocean has experienced dramatic changes. These changes have begun to significantly impact the hydrographic structure and stratification of this region's water mases, as well as the timing and extent of biological production and the biogeographic boundaries of a wide range of species at all trophic levels. Although many organisms may spread into or expand within Arctic waters as a result of this warming trend, few present such significant threats to human and ecosystem health as harmful algal bloom (HAB) species, particularly the dinoflagellate Alexandrium catenella and diatoms in the genus Pseudo-nitzschia. 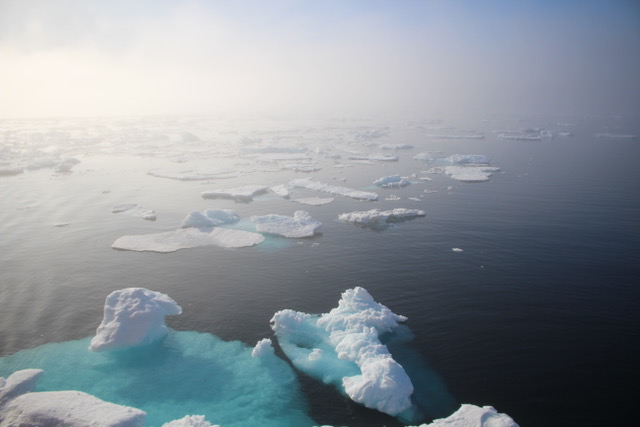 View of the Chukchi Sea from the USCGC Healy (August 2018)

The risks of Paralytic Shellfish Toxins (PSTs; produced by Alexandrium species) and domoic acid (DA; produced by Pseudo-nitzschia species) include human illness and death associated with seafood consumption as well as health impacts to marine wildlife at multiple trophic levels. Trophic transfer pathways are partially understood or can be inferred in some cases, but there is a critical knowledge gap regarding the relationships between HAB cell/cyst densities, toxin accumulation in vector species, and toxin loads that cause illness and/or death in marine wildlife. Many commercially valuable shellfish and finfish are impacted by these toxins, as well as subsistence-harvested marine mammals. Not only are fish and marine mammals used for human consumption, but many of these species are threatened or endangered themselves. In order to effectively manage these important wildlife populations, it is imperative to understand the relationships between bloom densities and corresponding toxin production, accumulation, biotransformation and health impacts in marine wildlife at all trophic levels. 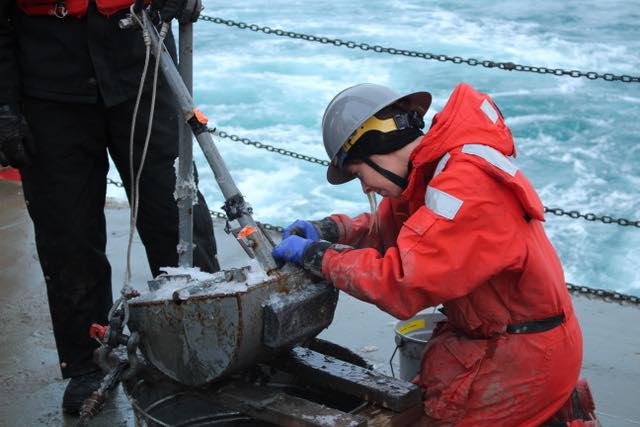 Recent studies by the PIs and others have found extraordinarily high numbers of A. catenella cysts at different locations on the Chukchi shelf, as well as A. catenella cell concentrations in surface waters from this same region that are well in excess of those leading to shellfish toxicity and regulatory closures. These data indicate that blooms of Alexandrium are occurring in Arctic waters, and that these blooms may originate from endemic as well as transported populations. The widespread presence of DA and STX in Alaskan marine mammals throughout the region raises concerns that threats to human and ecosystem health may increase due to changing environmental conditions. The intensity of Alaskan A. catenella blooms and occurrence of shellfish toxicity have already been linked to regional warming events. Warming ocean temperatures, decreasing seasonal ice cover, and thinning sea ice will likely expand the spatial and temporal windows for STX-producing Alexandrium germination and growth in surface waters. These conditions will also likely support increased growth and expansion of toxic Pseudo-nitzschia species that exist within the Arctic. The Arctic and Subarctic regions are currently experiencing rapid and dynamic environmental changes. In this era of rapidly increasing climate change, the next five years provide a critical window for improving our understanding of HABs and biotoxin risk in this vitally important ecosystem, and providing data that are urgently needed to guide management and mitigation strategies.

Don Anderson and colleagues were recently funded by National Oceanic and Atmospheric Administration (NOAA) through a competitive research program to develop quantitative models for trophic transfer and impacts of HAB toxins in Arctic and Subarctic food webs.  Using empirical data on the abundance of toxin-producing Pseudo-nitzschia and Alexandrium species, corresponding toxin levels in multiple trophic levels, and health assessments and behavioral observation data for marine mammals and fish, this five-year research program will investigate the prevalence of HAB toxins in Alaskan marine food webs, and will model their movement and impacts on human and natural ecosystems.