On August 18-20, 2022, scientists on board the research vessel Norseman II found very high numbers of Alexandrium catenella algae cell counts near Wales, Diomede and Shishmaref. Here is a link to the story in the Nome Nugget.

Research Cruise finds high levels of HABs in the Arctic

Significantly high concentrations of Alexandrium catenella were found in the Gulf of Alaska in July and August 2022 during the research cruise on the Norseman II. A health advisory was issued warning nearby communities that clabs, crabs, and tunicates in these waters could affect human and animal health. The full story in The Nome Nugget can be found here.

A local news story on May 3, 2022 covered harmful algal blooms in the New England and Cape Cod region and their potential to impact Falmouth, Massachusetts, an area which is not monitored by state agencies. The full story in the Falmouth Enterprise can be found here.

A news story in Nome, Alaska on April 2022 featured research on algal toxin levels in the marine food web. The full story in the Nome Nugget is available here.

A story in the Cape Cod Times on Feb. 2, 2022 covered harmful algal blooms (HABs) in Cape Cod waters. “What you are seeing on the Cape is decades of problems with septic systems,” said Anderson. Groundwater travels slowly and even if the entire Cape was sewered today and no more nitrogen or phosphorus entered groundwater, there is a big reservoir of nutrients that will reach ponds and marine embayments for decades to come and a lot more already stored in bottom sediments. Meanwhile the temperature is going up and these species are doing very well,” The full story is available here.

Hakai Magazine interviewed research biologists Evie Fachon at WHOI and Kathi Lefebvre at the NOAA Northwest Fisheries Science Center in Seattle, Washington for an article focusing on the potential for a significant increase in Alexandrium catenella harmful algal blooms due to warming Arctic waters. Alexandrium catenella blooms produce saxitoxin, a neurotoxin that paralyzes the nervous system in wildlife and humans and cannot be removed by cooking or freezing, thus raising serious concerns for food security for Native Alaskan communities that rely on wild harvests.

Here is a link to the article written by Tim Lydon and published online in Hakai Magazine, 12/2/21.

Don Anderson gave a virtual presentation at the University of Alaska Fairbanks on 10/13/21 focusing on the potential for a significant increase in Alexandrium catenella harmful algal blooms due to warming Arctic waters. During annual blooms, the cells produce saxitoxins, potent neurotoxins, which accumulate in the food web and can lead to paralytic shellfish poisoning (PSP), a potentially fatal human poisoning syndrome. Recent data shows that most forage and predatory fish in Southeast Alaska have trace or low levels of saxitoxin that are not considered harmful, and levels of toxin measured thus far in Arctic fish have also been low. However, saxitoxins in shellfish consumed by walruses and other marine animals raise concerns for food security for Native Alaskan communities that rely on wild harvests.

Data from 2018 and 2019 Arctic research cruises showed extensive beds of Alexandrium cysts, a dormant stage of the algae, in seafloor sediments north of the Bering Strait, in the Chukchi Sea, and in the western Beaufort Sea near Pt. Barrow. In the Chukchi sea, cyst counts show a massive and persistent cyst distribution extending at least 200 km offshore and up to 600 km alongshore. This Alexandrium catenella cyst seedbed was found to have 17,000 cysts per cubic centimeter, among the highest ever reported for this species globally. Describing this as a “sleeping giant” Arctic cyst bed, Anderson explained that Alexandrium cysts in bottom sediments can survive from decades to a century, so this would “represent a significant and dangerous site for in situ bloom inoculation as waters warm.”  In addition, warming Arctic waters support earlier and faster germination of cysts as well as longer periods during which blooms can occur. In his concluding remarks, Anderson emphasized: “Everything described here speaks to the potential for significant and increasing HAB impacts on human and ecosystem health in the Alaskan Arctic. Recognize that many regions of the world face similar risks, and yet are able to maintain healthy communities and ecosystems.” 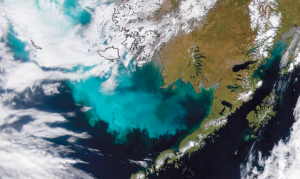 Here is a link to a recording of the “Strait Science” lecture presentation, which was sponsored by the UAF Northwest campus and UAF Alaska Sea Grant: https://www.youtube.com/watch?v=Zksf9Fd78Nw

News stories in Nome, Alaska featured research Don Anderson presented at a “Strait Science” lecture in October 2021 sponsored by the UAF Northwest campus and UAF Alaska Sea Grant.  His presentation discussed the recent expansion of harmful algal blooms in the Alaskan Arctic, and the potential impacts to regional residents. Listen to the story on KNOM radio here. The full story in the Nome Nugget is available here.

Don Anderson and colleagues were recently funded by National Oceanic and Atmospheric Administration (NOAA) through a competitive research program to improve the nation’s collective response to the growing problem of harmful algal blooms (HABs).  This five-year research program will investigate the prevalence  of HAB toxins in Alaskan marine food webs, and will model their movement and impacts on human and natural ecosystems.  View the full press release here. 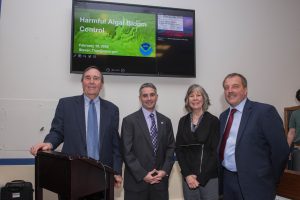 On February 19, 2020, Don Anderson spoke at a congressional briefing entitled “Controlling Harmful Algal Blooms”, co-hosted by NOAA’s National Centers for Coastal Ocean Science and U.S. Congressman Scott Perry (R-Pennsylvania). This briefing focused on the challenges of controlling HABs, a highly diverse and complex phenomena, and ways of evaluating different mitigation and control strategies currently in development. Additional featured speakers were Peter Moeller from NCCOS, Kathryn Coyne from the School of Marine Science and Policy at the University of Delaware, and Steve Thur from NCCOS.