Paralytic shellfish poisoning (PSP) is a potentially fatal syndrome associated with
the consumption of shellfish that have accumulated toxins produced by microscopic algae. This phenomenon, considered to be the most widespread of the poisoning syndromes caused by blooms of toxic algae (commonly called “red tides” or “harmful algal blooms” [HABs]), affects freshwater drinking supplies as well as coastal fisheries worldwide and is a significant and growing threat to human health, fisheries resources, and the health of aquatic ecosystems. Saxitoxin, the most widely known PSP toxin, is produced by a limited number of marine dinoflagellates (e.g., Alexandrium tamarense) and freshwater filamentous cyanobacteria (e.g., Anabaena circinalis). The biosynthetic pathway for saxitoxin synthesis is poorly understood and none of the genes involved in saxitoxin synthesis have been conclusively identified.

This proposed study will use the latest molecular and computational methods to identify and characterize the genes involved in saxitoxin production, the causative agent of PSP. The specific aims represent a novel approach for identifying these genes – and are only possible with the advent of new technologies that allow rapid and inexpensive DNA sequencing. We propose to obtain 20X genome coverage of three strains of toxic cyanobacteria and near complete transcriptome profiling of three toxic dinoflagellate strains. The cyanobacteria represent an attractive model for identifying putative saxitoxin genes because of their small genomes and the wealth of genomic information available in the public databases. In contrast, the most significant impacts from saxitoxin toxicity derive from dinoflagellate blooms in marine systems. For these reasons, our project was formulated to use both phylogenomic and molecular data to first identify putative saxitoxin genes in cyanobacteria and then utilize this information to identify homologs in dinoflagellates. Furthermore, the addition of six new genome-level data sets to public databases will provide unique opportunities for our group as well as other scientists to examine genome organization and evolution, important biochemical pathways, and the mechanisms and extent of horizontal gene transfer (HGT) between microbes. The wealth of sequence information obtained in this study will be combined with data from a recently funded proposal to sequence the transcriptomes of two other dinoflagellates, allowing for the first time detailed insights into dinoflagellate evolution and the number and diversity of dinoflagellate genes. 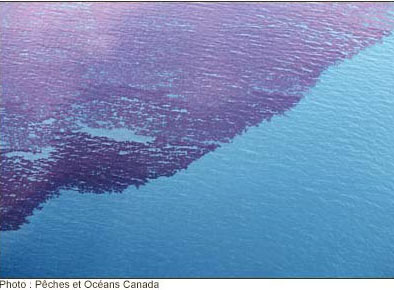 A bloom of Alexandrium tamarense in the St. Lawrence River. (Fisheries and Oceans, Canada