Deposition and resuspension of Alexandrium fundyense resting cysts in the Gulf of Maine: Phase II

The Gulf of Maine (GOM) supports productive shellfisheries frequently impacted by paralytic shellfish poisoning (PSP) - a serious threat to human health caused by the toxic dinoflagellate Alexandrium fundyense. PSP is the most widespread of the poisoning syndromes associated with harmful algal blooms (HABs). Blooms of A. fundyense in the GOM are highly seasonal, consistent with the view that life history transformations between cysts and vegetative cells are major regulatory factors. The ecology and oceanography of A. fundyense have been relatively well studied, but encystment and excystment dynamics remain poorly understood. Here we propose the second phase of a continuing study focusing on several aspects of that dynamic – the processes controlling the delivery, deposition, resuspension, and accumulation of resting cysts. In the parent project to this proposal, we mapped the distribution of A. fundyense cysts in GOM bottom sediments and the benthic nepheloid layer (BNL) and obtained trap data on the sedimentation and resuspension fluxes of cysts through time.

In this continuation project, the specific objectives are to: 1) determine the sinking characteristics and depositional behavior of resuspended cysts in bottom sediments; 2) incorporate the USGS Community Sediment Transport Model into our existing physical-biological model for Alexandrium dynamics in the GOM; 3) use this model formulation to explore the relationship between existing maps of cyst distribution and sediment type, and the thickness and cyst content of the BNL at different locations in the GOM;  4) characterize cyst content and residence time in the BNL at different locations in the GOM with varying BNL thicknesses, taking into account both resuspension fluxes and lateral advection; 5) conduct numerical experiments to explore the processes involved in the sedimentation of newly formed A. fundyense cysts, their deposition, reworking, and eventual redeposition in major cyst seedbeds in the GOM; and 6) optimize cyst mapping strategies to minimize cost without unacceptable loss of accuracy in model forecasts.

The approach we will take will be to use observations from the parent project as well as new laboratory experiments and numerical model simulations to characterize cyst dynamics in surface waters, the BNL, and bottom sediments of the GOM.

Keafer, B.A., J.H. Churchill, and D.M. Anderson.  2005. Blooms of the toxic dinoflagellate, Alexandrium fundyense, in the Casco Bay region of the western Gulf of Maine: Advection from offshore source populations and interactions with the Kennebec River plume. Deep-Sea Res. II 52(19-21): 2631-2655. 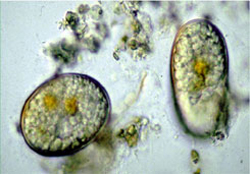 In the western Maine region, one important focus is on the quantitative dynamics of cyst germination, since this produces the new cells that initiate blooms in that region. (Photo by D. Wall) 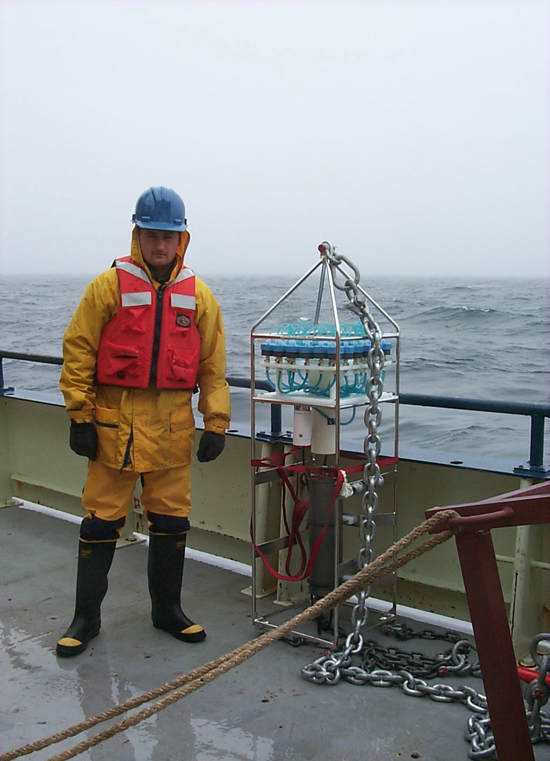 Kerry Norton stands ready to deploy a McLane time-series phytoplankton sampler at a study site in the Gulf of Maine. The sampler will be deployed for six months in order to obtain time series data on resuspended cyst abundance within bottom sediments and the benthic nepheloid layer. (Photo by C.H. Pilskaln)