Dynamics of Alexandrium fundyense distributions in the Gulf of Maine

An observational and modeling study of nearshore and offshore shellfish toxicity, vertical toxin flux, and bloom dynamics in a complex shelf sea.

The Gulf of Maine (GoM) and its adjacent southern New England shelf is a vast region with extensive shellfish resources, large portions of which are frequently contaminated with paralytic shellfish poisoning (PSP) toxins produced by the dinoflagellate Alexandrium fundyense. The year 2005 was an historical one for A. fundyense and PSP dynamics in this area, with a bloom that was more severe than any seen in the last thirty years. There are significant challenges to the management of toxic shellfish in this region - in particular the need to document the major transport pathways for A. fundyense, and to develop an understanding of the relationship between blooms and environmental forcings, as well as linkages to toxicity patterns in nearshore and offshore shellfish. An additional challenge is to expand modeling and forecasting capabilities to include the entire region, and to transition these tools to operational, management use.

The overall objective of this project is to establish a comprehensive regional-scale understanding of Alexandrium fundyense dynamics, transport pathways, and associated shellfish toxicity and to use this information and relevant technologies to assist managers, regulators, and industry to fully exploit nearshore and offshore shellfish resources threatened by PSP, with appropriate safeguards for human health.

For more information on the GOMTOX project, including the full proposal and complete list of investigators, please follow the link below.
» GOMTOX 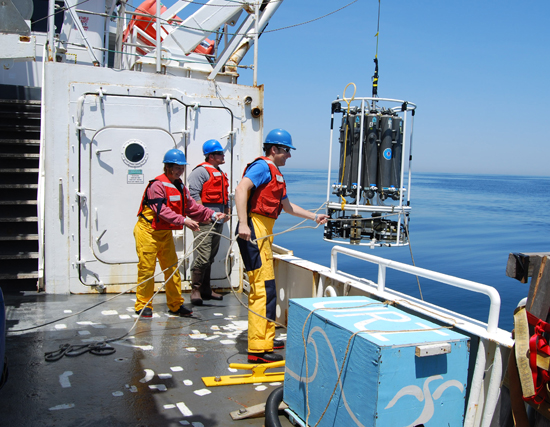 A CTD to measure conductivity, temperature and density of seawater, is deployed from R/V Endeavor during a GOMTOX cruise. The CTD is the primary tool for determining essential physical properties of seawater. (Photo by Keston Smith) 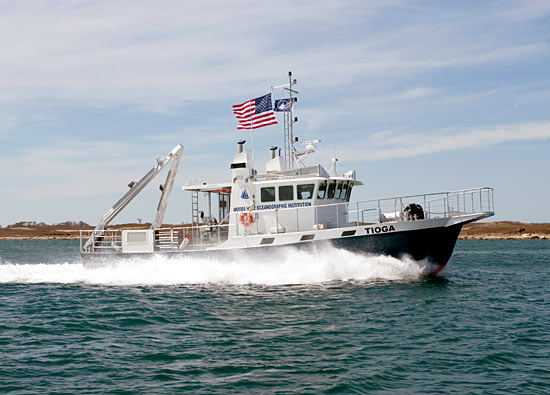 R/V Tioga, WHOI's coastal research vessel, is used for many of our shorter cruises. (Photo by Tom Kleindinst, WHOI) 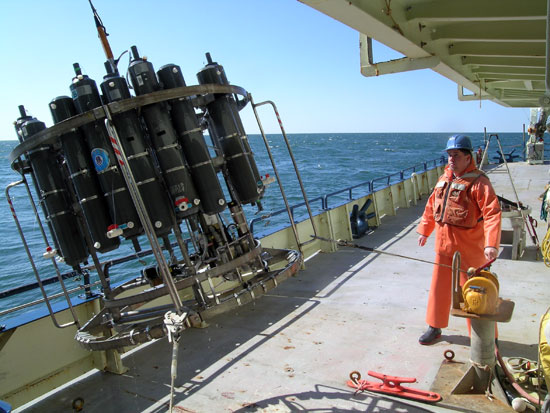 A CTD, to measure conductivity, temperature and density of seawater, is deployed from research vessel Oceanus during a harmful algal bloom cruise. The CTD is the primary tool for determining essential physical properties of seawater (Maureen Lynch, Colgate University) 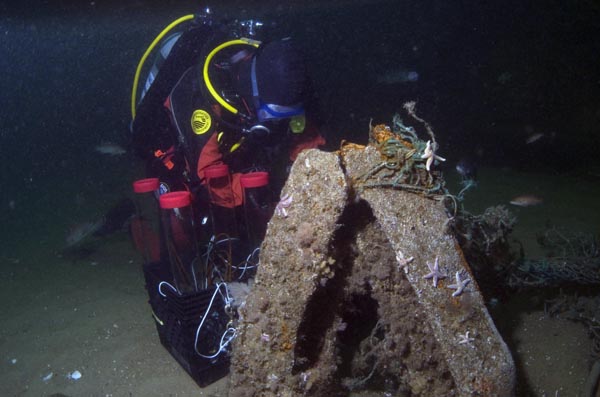 Researcher Ben Haskell at work on the site of the Josephine Marie shipwreck at a depth of 100 feet. (M. Lawrence, SBNMS)