Mating incompatibility among toxic and non-toxic populations of Alexandrium

Harmful algal blooms (HABs) are a serious and growing problem in the US and the world. Impacts include the illness and death of human consumers of contaminated seafood, mass mortalities of fish and marine animals, deterioration of coastal esthetics and water quality, and broadly based ecosystem impacts. Among the multiple poisoning syndromes linked to HABs, paralytic shellfish poisoning (PSP) is arguably the most widespread and significant on a global basis.  Dinoflagellates within the genus Alexandrium, and in particular within the “tamarensis” (A. tamarense, A. fundyense and A. catenella) and “minutum” (A. minutum, A. lusitanicum, and A. angustitabulatum) species complexes, are responsible for many of these PSP outbreaks worldwide.

Two characteristics of the temporal and spatial pattern of these Alexandrium species are noteworthy. First, over the last several decades, the distribution of species within both complexes has expanded geographically as a result of natural and human-assisted dispersal mechanisms. Second, there are both toxic and non-toxic varieties of certain species within each of these complexes, and sometimes these bloom in relatively close proximity to each other. This latter observation is particularly noteworthy given recent results which demonstrate that toxic and non-toxic strains of A. tamarense can mate and produce resting cysts, but the cells that germinate from these cysts quickly die as they attempt to divide. A reproductive barrier thus exists for at least some strains of this species.

The overall objective of this project is to investigate mating compatibilities among toxic and non-toxic members of the “tamarensis” and “minutum” species complexes of Alexandrium. This will involve a combination of laboratory and field studies in a direct collaboration between US and EU partners under the EC-NSF Cooperative Activity in Environmental Research. Specific objectives are to:

The scientific implications of the proposed study are significant, as the mating incompatibilities to be explored may explain observed distributions of toxic and non-toxic Alexandrium species throughout the world and relate directly to the potential success of an invasion of one toxin-type into the domain of the other, such as through natural currents and storms, or ballast water discharge. The broader impacts are also significant. HABs represent a serious threat to public health and efficient utilization of coastal resources. In addition to practical implications with respect to species dispersal via ballast water discharge or other human-assisted means, a novel bloom control or mitigation strategy of potential value to society will be investigated whereby a non-toxic strain of Alexandrium could be introduced to an area subject to toxic outbreaks in a manner analogous to the release of sterile males to control insect pests.

SEED:  Life cycle transformations among HAB species, and the environmental and physiological factors that regulate them
» Visit website 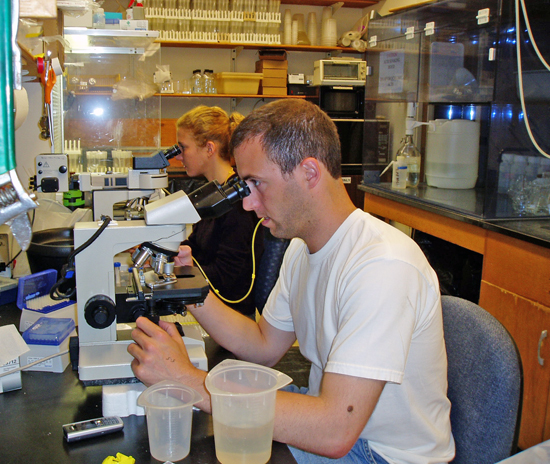 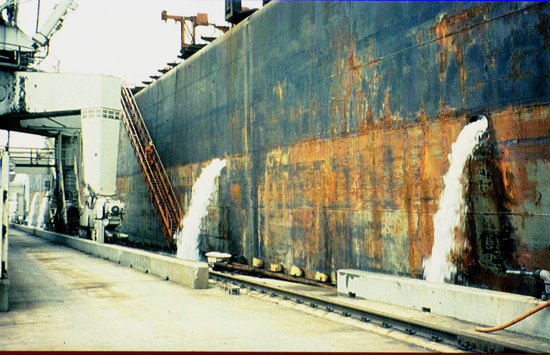 Large vessel unloads ballast water after it arrives at shore.