Global warming is ocean warming: the upper 2.5 meter layer of the ocean has the same total heat capacity as the entire atmosphere. The influx of greenhouse gases into the atmosphere from human activity has created a tiny planetary energy imbalance, leading to an accumulation of heat over time. Nearly all this extra heat has been absorbed by the ocean. This makes the ocean, particularly deep below the surface where temperatures are slower to change, the best place to identify long-term shifts happening in our climate. With its high-quality sensors, global spatial and temporal coverage, and large depth range, the Argo program is well-suited to observing signals of climate change.

The Argo member nations have combined efforts and resources to maintain an array of floats with unprecedented spatial coverage of the world’s oceans: a target of one float per 3 degree box across the ocean, where it is deeper than 2000 meters (the depth at which an Argo float begins its vertical profiles). Historically, ocean and climate scientists relied on temperature and salinity measurements from commercial and research vessels, as well as from a limited number of stationary moorings. Unlike measurements from ships, Argo data are free from bias towards heavily-traveled shipping lanes. This global coverage is crucial for detection of climate change signals because within (and between) major ocean basins, heat is constantly transferred around different areas. Researchers need to be able to average out this natural variability in order to quantify longer-term changes happening in the ocean.

Distribution in time of Argo measurements is also much more uniform than that of ship-based measurements, since the floats operate year-round, unrestricted by frigid or treacherous weather. This provides the data necessary to understand natural temporal climate variability, and to accurately subtract it from climate change trends.

With a descent depth of 2000 meters, the Argo floats observe the upper half of the volume of the ocean. This depth is sufficient to look beyond seasonal temperature and salinity cycles into regions of the ocean that are slower to change. Efforts are also underway to incorporate floats into the array that can descend to 6000 meters, known as Deep Argo. Learn more about Deep Argo. 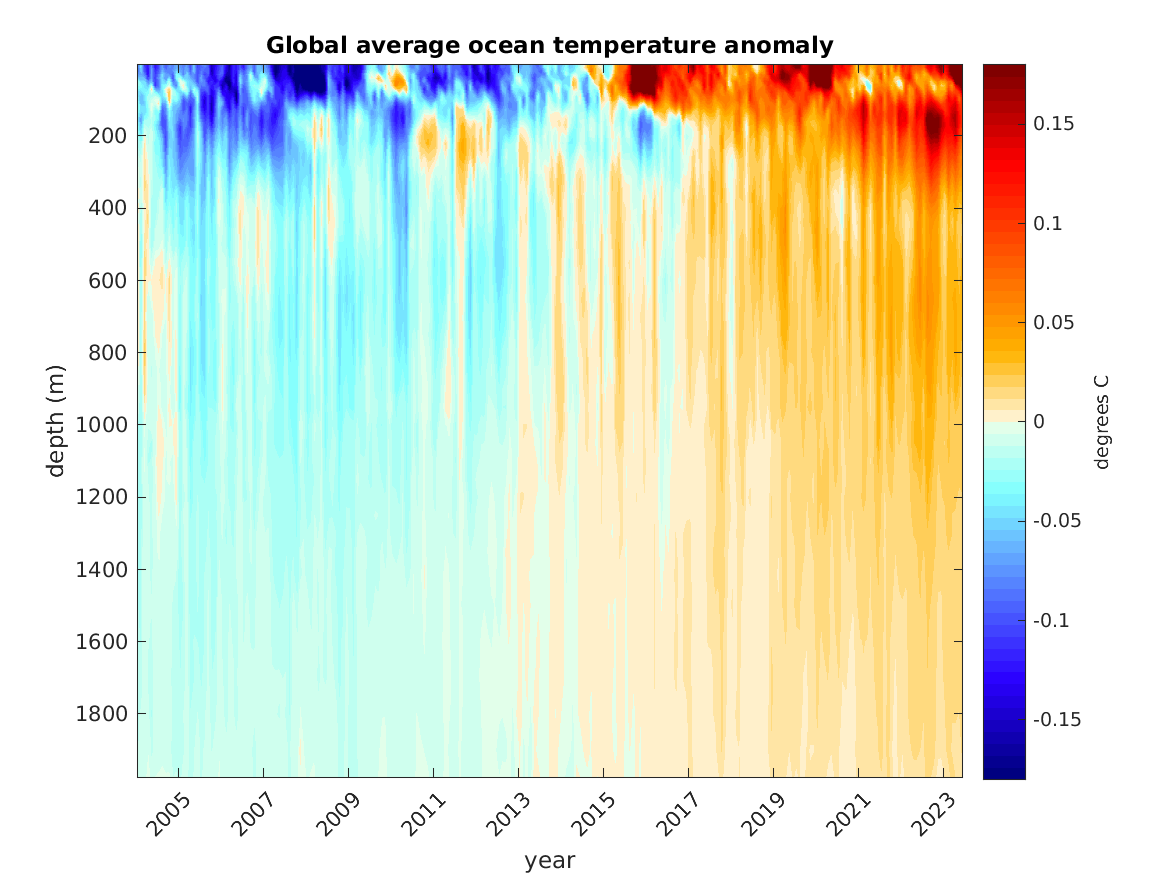 This plot of Argo data shows temperature anomalies averaged over the global ocean, down to 1900 meters, since 2004. While temperatures in the upper ~600 meters fluctuate with shorter-term climate events like El Niño-Southern Oscillation, deeper waters display a consistent warming trend. This deep signal is indicative of an overall warming of Earth's climate.

Learn more about how Argo data is used to calculate ocean heat content.

Salinity and the water cycle

In addition to observing temperature signals of the warming planet, Argo salinity data can be used to quantify changes in the hydrological cycle related to climate change. Warmer air can hold and transport more moisture, meaning that as the average global temperature increases, existing patterns of evaporation and precipitation will intensify. This will lead to both increased risk of drought in arid areas and increased flooding in wet areas of the world. The ocean surface is a good place to observe this intensification of the hydrological cycle, as sea surface salinity reflects the local balance of evaporation (which increases salinity) versus precipitation (which decreases salinity). The animation to the right shows monthly Argo salinity data starting in 2004, along with the monthly interannual anomaly (the difference between the monthly salinity and the average salinity for that month over time). When compared with historical data, Argo observations show a distinct increase in salinity in salty areas, and decrease in salinity in fresh areas.

Read more about Argo observation of the global water cycle.