Helium Isotope Mass Spectrometers: These are WHOI-constructed, statically operated, mass spectrometers (locally referred to as MS1 and MS3) and are 10 inch radius, 90 degree magnetic sector instruments with a high emission Nier type ion sources and branch tube design for fully simultaneous collection of 3He and 4He. On both spectrometers a faraday cup is used for 4He measurement with a precision integrating digital electrometer, and Galileo Channeltron operating in pulse counting mode with high speed preamplifier and discriminator electronics is used to measure 3He. The instruments have been modified to improve the 3He detection limit to ~1000 atoms with the installation of a retardation potential slit array. One mass spectrometer (MS1) is dedicated to the measurement of tritium (in-growth of 3He) and helium (isotopic ratio and concentration) in seawater and ground water samples (e.g., see Lott and Jenkins, 1984) as well as neon concentrations. The fully automated sample processing line is optimized for purification and separation extracted water samples, and includes a two-stage cryogenics system for the separation of He and Ne from background gases. About 1% of the helium sample (released at 40 K from an activated charcoal trap) is aliquoted into a Balzers quadrupole mass spectrometer (QMS) to verify sample size before inlet of the remaining He into the magnetic sector instrument. While the helium isotopes are being measured in the magnetic sector instrument, a reproducible fraction of the neon component is released at 75 K to the QMS for peak-height manometry and neon isotopic analysis. Samples are measured better than an accuracy of 0.5% in He and Ne concentrations, and 0.15% in 3He/4He ratio using WOCE-standard techniques. Tritium measurements are accurate to 0.005 TU and 1%.

Helium Isotope and Noble Gas Mass Spectrometer System:The second spectrometer (MS3) is a third generation, WHOI-constructed, statically operated, helium isotope mass spectrometer with a similar (to MS1) but improved design. The fully automated sample processing line is optimized for processing gas extracted from water samples, and combines a new three stage cryogenics system (Lott and Jenkins 1984; Lott 2001; Stanley et al, 2008) with Pd-catalyst and SAES-707 getters for the removal of water, methane, oxygen, nitrogen and carbon dioxide, and the reproducibly quantitative separation of the 5 noble gases (He, Ne, Ar, Kr, and Xe). Helium isotopes are measured using the magnetic sector dual-collecting mass spectrometer to a reproducibility of 0.1%, and the other noble gases using a quadrupole mass spectrometer (QMS) with a triple mass filter and an electron multiplier operated in pulse counting mode. The system achieves reproducibility of gas standards of 0.1% for He, Ne, Ar, and Kr, and better than 0.2% for Xe.

Noble Gases from Moored Samplers:
We have developed a moored sampler that can take up to 50 noble gas samples from seawater over time-scales as long as 6 months. The system uses permeation technology to equilibrate captive distilled water samples with surrounding seawater. The 1 gram samples are subsequently analyzed on an automated processing system in our laboratory. The noble gas extraction and analysis system includes a dual cryogenic trap and getter/catalyst system simlar to MS3, but is designed for analysis of smaller (~1g) water samples. The system has a 200 amu mass range QMS with faraday cup and an electron multiplier operated in current mode for noble gas measurements. The system achieves reproducibility of gas standards of 0.2% for He, Ne, Ar, and Kr, and better than 0.3% for Xe.

Ancillary Vacuum Systems:Additional systems are used in the laboratory in support of our analytical work. These include

=> A high-vacuum sample-processing system for the extraction of the dissolved noble gases from ~45 gram seawater samples collected in copper tubes. Tritium measurements are made on the corresponding degassed water component by the 3He in-growth method.

=> A high vacuum low helium blank sample processing system for degassing nominal 500 gram water samples for tritium measurement by the 3He in-growth method as above.

System Automation and Control: Instrumentation in the laboratory is largely automated using a software system developed at WHOI using Visual Basic. Mass spectrometer operations occur 24/7 and can be monitored and controlled remotely. The advantage of this system is that in addition to ease of use and effective utilization of resources, measurement protocols are highly reproducible and well documented: environment and system monitored data are continuously recorded during system processing. Custom-designed "Display" programs allow rapid assessment of instrument performance and easy access to experimental response details. Data is ultimately stored in a relational database system for processing by MATLAB.

Data Processing and "Non-Linear Effects": It is well known that "apparent" 3He/4He ratio measured in the spectrometer depends on the presence of other gases, and also on the amount of He in the static volume. We avoid biases introduced by the presence of gases other than He by cryogenic purification. The He size-effect is calibrated by regular and repeated measurement of variously sized aliquots of otherwise identical isotope ratio He. These determinations are used to correct for size-effect in our unknown samples. Another problem occurs with one of the noble gases, Kr, associated with "matrix effects" on the sorption/desorption characteristics of the cryogenic trap system on MS3 (Stanley, 2007). The effect is modest (around 1%) and related to variations in the abundances of Ar and Xe in the sample. This has been documented experimentally and corrected for.

The fully automated noble gas processing system for MS3, our combined noble gas and helium isotope analysis system. The round grey units are computer controlled pneumatic actuators for the UHV valves. To the left is the "automanifold" where samples are mounted in groups of 8 for processing. Sixteen samples can be mounted for unattended operation of the system. The three vertically oriented "silver" cylinders near the center of the picture contain the programmable cryogenic traps. 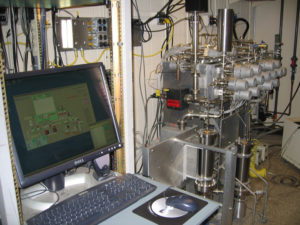 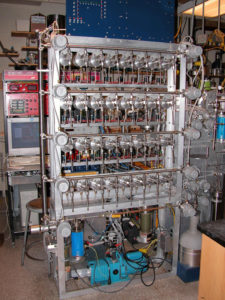 Our seawater and helium isotope and tritium measurement mass spectrometer (MS1). Up to 32 extracted gas samples are mounted on the automanifold on the right for automated analysis.