Helium consists of two stable isotopes: 3He and 4He. Although chemically identical (their nuclei contain 2 protons each) they each have different numbers of neutrons, and hence atomic mass. Helium is present in the atmosphere as a trace gas (~ 5 parts per million), and is also rather insoluble in seawater. Thus it is present only at a level of only about 2 nano-moles per kg of seawater. The isotopic ratio 3He/4He is only 1.4 X 10-6 in air. That is, there is only one atom of 3He for every 700,000 atoms of 4He in air. Thus 3He is a million times less abundant than it's more prolific cousin. Aside from He dissolved from the atmosphere, there are two other sources of non-atmospheric He in the ocean. The first is He that is released from volcanic or hydrothermal activity on or near the sea floor. This helium is generally has a higher 3He/4He than atmospheric He, often approaching 10 X the atmospheric ratio, and sometimes as high as 30 X or more. The signature of this volcanic helium is observable over many thousands of km in the abyssal Pacific (see upper figure on this page), and is usually described as a percentage deviation in the observed isotope ratio from the atmospheric ratio. Notice the plume of volcanic helium in the northernmost section (uppermost panel in the figure) that extends all the way across the Pacific. Since helium is an inert gas, its behavior in seawater is simple and conservative. Thus, once away from the seafloor and volcanic centers, we can use the volcanic signature as a tracer of ocean mixing and circulation. Notice the structure in the more southerly sections (middle and lower panels of the figure) which shows the imprint of deep gyre circulations in the South Pacific. This volcanic helium signal extends into the Antarctic Circumpolar Current, and is traceable all the way into the North Atlantic. It is indeed the isotopic "shot heard around the world".

Tritium and Helium-3 in the Shallow Ocean

Atmospheric nuclear weapons testing during the 1950s and 1960s produced copious amounts of the radioisotope tritium, which decays with a 12.4 year half-life to 3He. Because it is an isotope of hydrogen, tritium travels with water, and hence is a beautiful tracer of the water cycle on our planet. We can observe the pentration of this bomb-tritium into the ocean, much like a dye and X-Ray sequence might be used to study a patient in the hospital. The tritium has the added benefit that its decay can produce measureable amounts of excess "tritiugenic" 3He in the shallow ocean. Seawater at the ocean surface tends to lose this excess by gas-echanging with the atmosphere, driving the seawater 3He/4He ratio toward solubility equilibrium with the atmosphere. If the water sinks below the ocean surface, however,  3He can accumulate. Measuring both the  3He and the tritium allows us to determine the time that the water has been away from the ocean surface. In principle this dating tool is useful on time scales ranging from a month or so up to a few decades. Thus we could use this a measure of the ventilation time-scale for water masses in the upper few hundred meters of the ocean (see lower figure on this page). As with all "transient tracers" the problem is complicated due to mixing effects. It is still possible to obtain useful information, but one must be careful not to interpret tritium-helium ages literally. The reader might consult some of the following papers.

Being able to date the subduction of surface water into the thermocline also allows us to determine the rates of biogeochemical processes occuring in the shallow ocean. In particular, we can estimate rates of oxygen consumption, and hence bacterial respiration. These determinations can in turn lead to regional estimates of primary productivity and illuminate the dynamics of the marine food web. In addition, the back-flux of the tritiugenic  3He to the ocean surface can be used to constrain the rate of supply of nutrients to the surface ocean, another important determinant of biological production.

The noble gases (He, Ne, Ar, Kr, and Xe) have a broad range of physical characteristics. Specifically, the solubilities of these gases range over an order of magnitude, with Xe being much more soluble in water (and the temperature dependence of that solubility much greater) than He. In addition, the molecluar diffusivity of He in water is as much as five times higher than Xe. Combined with their inertness, which makes their behavior "simpler", the characteristics of noble gases provide us with potentially powerful tools for probing physical processes in the environment. An example application is recent work by Rachel Stanley, who determined a multi-year time-series of noble gas abundances in the upper waters near Bermuda. The seasonal summer-winter warming/cooling cycle tends to drive gases out of and into the shallow ocean: a kind of annual breathing cycle. The ocean's inability to completely keep up with this cycle results in small supersaturations or undersaturations that can be used to precisely characterize the gas exchange and bubble injection rates on seasonal time-scales. We do this by comparing model simulations with observations (see figure here, as well as Stanley et al, 2006, Stanley 2007, and Stanley et al, 2008). 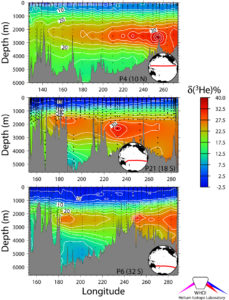 Three zonal sections versus depth in the Pacific showing the extent of tongues of 3He emerging from seafloor hydrothermal volcanism along the East Pacific Rise. The data are expressed as isotope ratio anomaly (the percentage deviation from the atmospheric ratio). The samples were taken and analyzed during the WOCE expeditions. 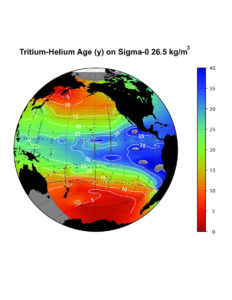 The tritium-helium age (in years) on the 26.5 kg m-3 density horizon in the Pacific. This horizon corresponds to water masses slightly less dense, and hence shallower than the Intermediate Waters in the Pacific. Please remember that the age must not be interpreted literally. 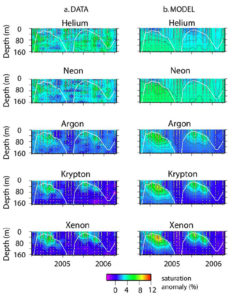 A comparison of observed (left) and modeled (right) time series noble gases in the upper waters near Bermuda as measured by Rachel Stanley.