Solubility of Noble Gases in Water and Seawater

A Laboratory Determination at Atmospheric Concentrations

We have determined the solubility equilibrium concentrations of atmospheric helium, neon, argon, krypton, and xenon in water and seawater over the over a temperature range of approximately freezing point to about 35°C and a salinity range of 0 to roughly 36.7 PSU. In all, approximately 60 measurements were made at 30 distinct temperature and salinity combinations. The results are fitted to a seven parameter function commonly used to compute solubility equilibrium concentrations of these gases for environmental waters. Because our methods are calibrated using assumed and explicit atmospheric abundances of these noble gases, any subsequent changes in the “known” atmospheric abundances cancel out in the determination. Based on an estimate of analytical accuracy, reproducibility of the comparison with secondary atmospheric standards, and replicate sample reproducibility, we estimate this function to predict equilibrium concentrations to overall precisions of approximately 0.15% for
these gases, with an absolute multiplicative accuracy of 0.15%. The former is consistent with the regression statistics associated with fitting the smoothing functions, while the latter is based on our confidence in and experience with the integrity and calibration of our air standards.

Because of their biological and chemical inertness, and their wide range of properties (molecular diffusivity and solubility), the measurements of the suite of dissolved noble gases (He, Ne, Ar, Kr, and Xe) in seawater offer considerable promise as diagnostics of air-sea gas exchange (Stanley et al.,
2009b), deep-water formation (Hamme and Severinghaus, 2007), and sea-ice interactions (Loose and Jenkins, 2012). Interpretation of these concentrations, however, depends on an accurate knowledge of the equilibrium solubility concentrations of these gases in water and especially seawater. Given that the approximate scale of disequilibria for the noble gases in most oceanic situations is of the order of a few percent, knowing the solubilities of the noble gases to of order 0.1% is desirable. Recent work has strongly suggested that this knowledge is lacking for xenon (Hamme and Severinghaus, 2007; Stanley et al., 2009b), so this work is an attempt to rectify the problem. We determined the solubility concentrations of krypton and xenon in water and seawater in equilibrium with marine air at a number of temperatures ranging from near-freezing to 35°C and at three salinities (0, ~18.5, and ~36.6 PSU). Replicate samples were taken at each temperature- and salinity-point, and the results fit to a commonly used quasi-thermodynamic function used by oceanographers to compute equilibrium gas concentrations as a function of temperature and salinity.

We chose to do the solubility determinations at atmospheric krypton and xenon abundances rather than with pure gases to avoid any potential questions arising from the extrapolation of partial pressure ranges over 6 orders of magnitude or more. We collected two 20 liter carboys of surface seawater for these experiments from the western subtropical North Atlantic and “fixed” each by adding approximately 5 ml saturated mercuric chloride solution to inhibit biological activity during storage.

We performed the equilibrations using the system depicted schematically in Figure 1. The glass equilibration chamber, a “humidifier”, and a stainless steel tube “thermal equilibrator” were submerged in a constant temperature bath (Fluke model 7012) capable of thermal regulation to 0.001 °C. The temperature of the water within the equilibrator chamber itself was directly monitored using a Fluke model 5610-9 probe (NIST traceable calibration better than 0.003 °C) combined with a Fluke model 1504 readout unit (accurate to better than 0.003 °C), and the chamber internal pressure was monitored using a Paroscientific Digiquartz Model 6000-30A pressure transducer (NIST traceable full scale absolute accuracy 0.01%). In addition we used a second Fluke model 5610-9 probe with Fluke 1504 readout as a secondary monitor of bath temperature and a second Paroscientific transducer to monitor outside ambient pressure. We recorded all pressure and temperature readings at 15 second intervals for the duration of each equilibration experiment.

Both Fluke temperature probes (the “working” 5610-9 probes) were inter-compared in a constant temperature bath with a NIST-traceable calibrated Fluke 5640D probe, and agreed to ~0.001 °C. Prior to the  suite of equilibration runs, the two Paroscientific pressure transducers were inter-compared by connecting to a sealed 200 cc, stainless steel common volume held at fixed temperature for several hours, and agreed to within a mean value of 0.0016 Torr, and with an individual measurement standard deviation of 0.0017 Torr. After the equilibration series was complete, the inter-comparison was repeated and one of the transducers was returned to the factory for NIST-traceable recalibration, and the final results adjusted for an offset of 0.XXX Torr.

The glass equilibration chamber had a volume of 4.75 liters, and was reproducibly filled to a specific mark with 3.55 liters of water, leaving a headspace of 1.20 liters. Outside (“marine”) air was drawn into the headspace through tubing and a humidifier at a flow rate of approximately 125 ml min-1, so that the air in the headspace was replaced approximately every ~10 minutes to avoid compositional changes driven by differential exsolution or dissolution. Both the humidifier and the approximately 1 m long 6.25 mm O.D. stainless steel thermal equilibrator tube were also immersed in the constant temperature bath. Air entering the system was forced to pass through stainless steel tubing and humidifier to bring its temperature closer to that of the water in the equilibrator. The upstream humidifier consisted of a 200 cc volume stainless steel volume whose inlet tube was submerged in ~50 cc of (salt) water. Incoming air was thereby forced to bubble through the water to raise the relative humidity as close to 100% as possible. The purpose was to minimize evaporative cooling at the equilibrator water’s surface, particularly for warmer equilibration experiments. This meant that the equilibrator volume was operated at a slightly negative pressure compared to ambient, but because the vessel was tested leak-tight and the pressure of the chamber headspace was measured directly, this was accounted for.

The equilibrator water was stirred using a stir bar, whose spin rate was consistently set to 800 rpm. This established a stable vortex in the water that penetrated about a third of the depth of the vessel, ensuring vigorous, but consistent mixing, but did not induce cavitation or bubbles. We determined the time required for equilibration for a gas and its Schmidt Number dependence with a pair of compositional headspace displacement experiments (see next section) and used this information to model the composition-dependent “effective pressure” because the chamber was never isolated from outside air (to avoid compositional drift).

We stopped the air flow and stirrer on completion of the equilibration process and immediately began transferring a water sample to a ~80 cm length of 16 mm O.D. OFHC copper refrigeration tubing via a syphon process through a stainless steel tube that penetrated to within 1 cm of the bottom of the equilibrator (see Figure 1). Drawing the water from the bottom of the equilibrator ensured that any subsequent effect of the air flow cessation or pressure/temperature changes during transfer were negligible.  When the equilibration temperature was below room temperature, we pre-chilled the copper tube and Tygon tubing to minimize any bubble formation due to exsolution of gases from the water as it flowed through the tubing.  During flow, the copper tube was tapped with a wooden stick to dislodge any bubbles that may have formed or been trapped during water entry into the system. In general, we allowed at least 1000 ml of water to flow through the copper tube before we temporarily isolated the sample using pinch clamps on the Tygon tubing. Within a minute or so we crimped the copper tube in three places, producing two separate water samples using a standard sea-going method that produces helium leak-tight samples (Young and Lupton, 1983).

We quantitatively extracted the gas samples from the water trapped in the sealed copper tubing on a separate vacuum system into ~30 cc aluminosilicate glass ampoules using our routine noble gas extraction methods. The size of the water samples was typically ~46 grams, determined to an accuracy of 0.015 grams (0.03%) by weighing the copper sample tubes full and empty. Laboratory experiments using an online quadrupole mass spectrometer have shown the extraction method to have better than 99.9% extraction efficiency and undetectably small blanks for Ar, Kr, and Xe. The extracted gas samples were measured mass spectrometrically using peak height manometry calibrated with purified air aliquots of the noble gases (Stanley, 2007; Stanley et al., 2009a) to a precision of 0.1 to 0.3%, depending on the specific noble gas. Our motivation to use an air-standard calibration avoids any systematic uncertainty associated with possible errors in the atmospheric abundance of xenon and krypton.

To determine the Schmidt number dependency, we performed the compositional head-space displacement experiment at two temperatures in the following manner. Water was first equilibrated with air over a sufficiently long period of time (confirmed post-hoc by the results of the experiment itself) at a given temperature. The air in the headspace was “quickly” displaced (using a flow of ~1200 cc min-1 for 15 minutes) by research grade pure nitrogen, and then the chamber was isolated by valves. The pressure was then monitored with the Paroscientific transducer. During the subsequent period of time, the major dissolved gases re-equilibrated, with portions of the oxygen and argon coming out of solution into the headspace, and a fraction of the nitrogen in the headspace entering the dissolved phase. We performed this experiment at two temperatures; 20.32 and 1.95 °C and determined that the gas exchange time constant varied approximately as the 2/3 power of the Schmidt number (close to theoretical) and allowed us to compute the equilibration time scale for all gases as a function of temperature. We used this to design the experiment and model pressure response curves.

Because the system is open and subject to ambient pressure changes of order 1% that occur on timescales comparable to or shorter than the equilibration timescale, we need to correct for them. We did this by estimating the initial gas composition of the water in the equilibrator (subject to an arbitrary uncertainty of 10%) based on its history and the temperature of the additional “make-up” water. We then tracked the theoretical effective pressure disequilibrium for each constituent gas as a function of time given the actual (measured) ambient pressure history and the temperature- and gas-dependent exchange time-scale. The system was integrated forward in time using finite difference modeling, and an “equivalent” pressure was computed for each gas at the time of equilibration run termination and sample acquisition. Because propagation of errors associated with uncertainties in the initial composition and the time-constants was not directly possible, we performed a Monte Carlo ensemble simulation (1000 runs) using normally distributed errors in those parameters (with a conservatively posed standard deviation of 10% for initial conditions, and 5% in                         ). In practice, the equilibration run was not completed until the uncertainty in the projected effective pressure was less than 0.05%. Figure 3 shows an example of a typical “run” (distilled water at 10.2°C).

We do not list the results here because we are in the process of redoing the measurements with improved mass spectrometric techniques (ratiometric isotope dilution for Kr and Xe) and an improved equilibration apparatus.

This work was funded by the National Science Foundation Grant Number OCE-0752303 "A Determination of Krypton and Xenon Solubilities in Seawater for Oceanic Air-Sea Exchange and Ventilation Studies" and we are grateful for this support.

We give thanks also to Rachel Stanley for advising and assisting with mass spectrometric procedural design, Josh Curtice for extracting the samples, and Joanne Goudreau for assisting with some of the sampling and facilitating salinity measurements. 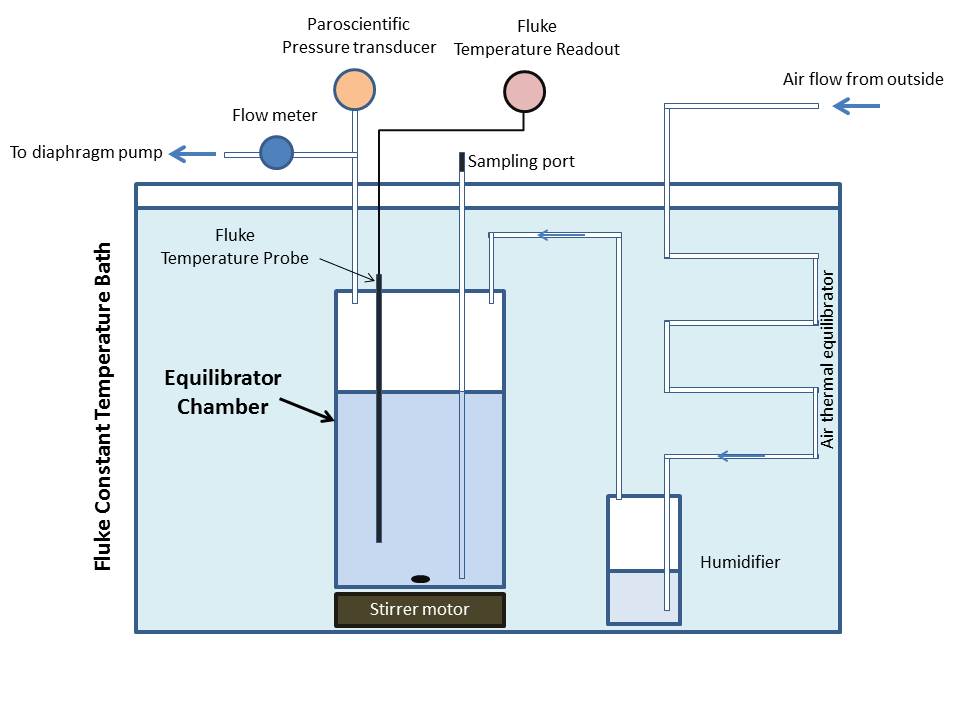