TowCam is a specially designed digital camera system that photographs the seafloor as it is towed above the ocean bottom behind an oceanographic research vessel. A regular underwater camera would not work in such an extreme environment, where it must take pictures in total blackness, crushing pressure, and freezing temperatures.

TowCam is also equipped to take samples of water and collect rocks from the seafloor.

How does TowCam work?

The camera system is towed 100 to 300 meters (328 to 984 feet) behind the ship at speeds of 1/4 to 1/2 knot, the equivalent of walking at a leisurely pace. After launch researchers work from the ship's lab, where they “fly” the TowCam about 5 meters (16 feet) above the seafloor. They track its depth and altitude, as well as water temperature, and water clarity, or turbidity. This information comes through a cable that links the TowCam to the ship. The cable also allows scientists to raise and lower the camera if they encounter deeper valleys or large rocks on the seafloor.

Each tow lasts 5 to 7 hours. It can operate night or day; nights are preferred when scientists are using the submersible Alvin for day operations.

Like any digital camera, there’s no need to wait for printing. The TowCam stores up to 1,800 images on a 2 gigabyte compact flash computer card in the camera housing. When the TowCam is back on the ship, the images are downloaded to a computer.

How big is TowCam?

Flying the TowCam requires concentration, as the system weighs nearly 1,300 pounds (585 kilograms) in water. It is approximately the size and shape of a refrigerator tipped on its side.

How many pictures can it take?

TowCam can take about 1,800 high-resolution (3.3 megapixel), color photographs each time it is deployed. A new digital photo is snapped every 10 to 15 seconds.

What platforms are needed for TowCam?

TowCam can be operated off a wide range of vessels, including smaller coastal vessels.The only requirement? A standard UNOLS 0.322” CTD coaxial cable and winch system. This must be available as the TowCam uses the data and power provided by the cable for the onboard SeaBird 25 CTD system.

TowCam is made from non-corrosive materials including stainless steel and plastics. The plastic vertical tail fin is made from a 1-inch wide polyethylene sheet.

TowCam provides very high quality digital imagery of seafloor terrains to 6,000 meters depth (19,685 feet) with the capability to collect rock/lava samples and water samples concurrently. It can be used as an effective survey tool in conjunction with other deep submergence vehicle operations. It has been used in conjunction with the vehicles Alvin, Jason2, ABE and for other standard oceanographic surveys. It is currently the only system of its kind in the world.

TowCam cannot be "steered"  because it is towed behind a ship. Unless it is navigated using an acoustic relay transponder, the position of the TowCam can only be estimated to within about 50 meters (164 feet). However, this degree of positional uncertainty is quite adequate for many reconnaissance surveys and for imaging and sampling seafloor features displayed on high resolution bathymetric or sidescan sonar maps.

The images from the TowCam are not viewable in real-time. They have to be downloaded from the digital camera once the system is back on deck, a process that takes about 40 minutes.

How has TowCam been used?

Since completion of their construction in mid-2002, TowCam systems have been used successfully on 14 research cruises.The TowCams have been used for seafloor mapping and imaging that span the fields of marine geology, petrology, volcanology, biology, hydrothermal vent mapping, and climate change/deep-sea coral mapping.

They have also been used offshore Taiwan in a collaborative program with the National Taiwan University, as well as site-survey mapping off northern Iceland for the Icelandic Energy Authority.

TowCam is more than just a camera. Scientists use the system to collect materials from the seafloor. To date, TowCam has been used to collect over 300 samples of volcanic glass and numerous water samples.  All this is in addition to recording approximately 280,000 deep-sea photographs. 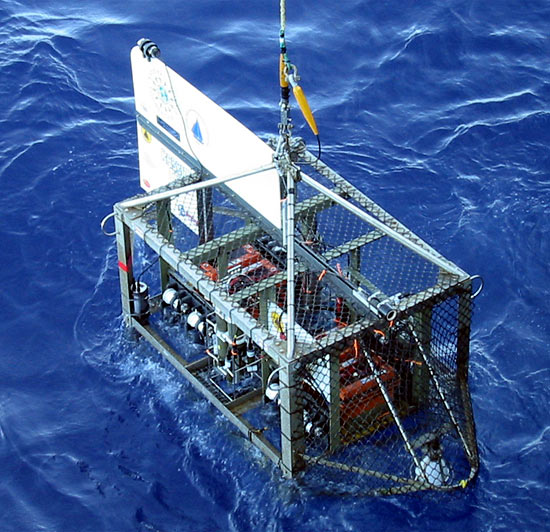 TowCam can take about 1,800 high-resolution (3.3 megapixel) color photographs each time it is deployed. A new digital photo is snapped every 10 to 15 seconds. (Photo courtesy Dan Fornari, WHOI) 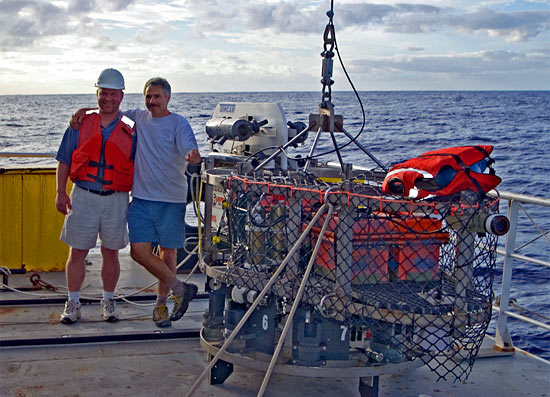 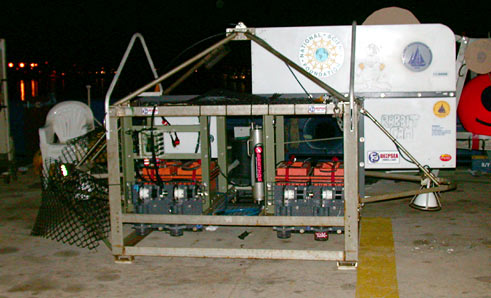 TowCam is made from non-corrosive materials including stainless steel and plastics. The plastic vertical tail fin is made from a 1-inch wide polyethylene sheet. (Photo courtesy Dan Fornari, WHOI) 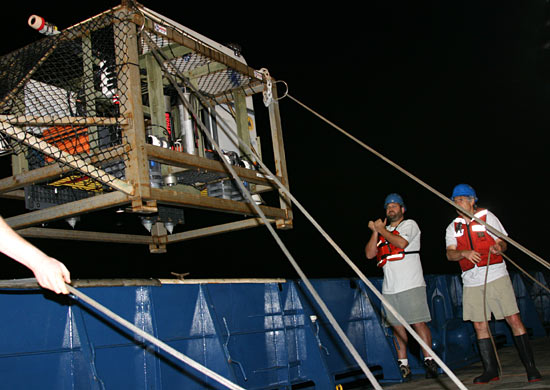 Scientists and ship's crew deploy TowCam, used to photograph the seafloor during a 2005 expedition to the Galápagos Rift. During that single expedition, TowCam captured more than 14,000 images of undersea terrain. (Photo by Amy E. Nevala, WHOI)