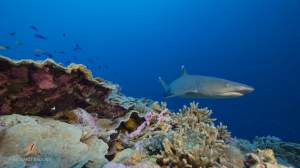 Setting sail for Nikumaroro this afternoon left me with mixed feelings, as Kanton has turned out to be such an incredible and beautiful place.

After meeting so many of the Kanton residents, spending time talking to them, eating with them and even dancing with them, and then diving on some of the most incredible reefs I have ever seen in more than 20 years of diving, we’ve been truly spoiled by the beauty of this place, both above and below the water.

It’s sad to leave, yet we’re looking forward to the next part of our expedition. 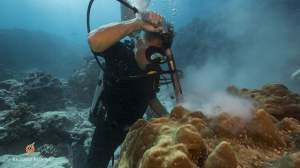 Pat’s coring activity generated a lot of interest by the fish and sharks nearby. It was hard to work in this area, as there was a fair bit of surge in the water that pushed things and people around a fair bit, which made for a challenging dive that lasted over 90 minutes, but we came up with six cores from a site with a huge diversity of corals. 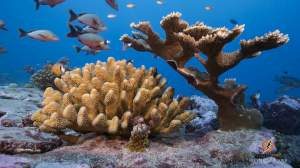 On an earlier scouting dive to locate the corals to core, we saw three manta rays, as well as the usual huge numbers of fish. We returned later to do another ecosurvey nearby, and by about 4:00 p.m., as the sun was getting lower and the water darker, the sharks suddenly switched from being shy to being very curious, with a few coming in for close inspections as I was filming. It was just a bit exhilarating.

One in particular took a rather direct line for me yesterday. It was an exciting end to an exciting day.