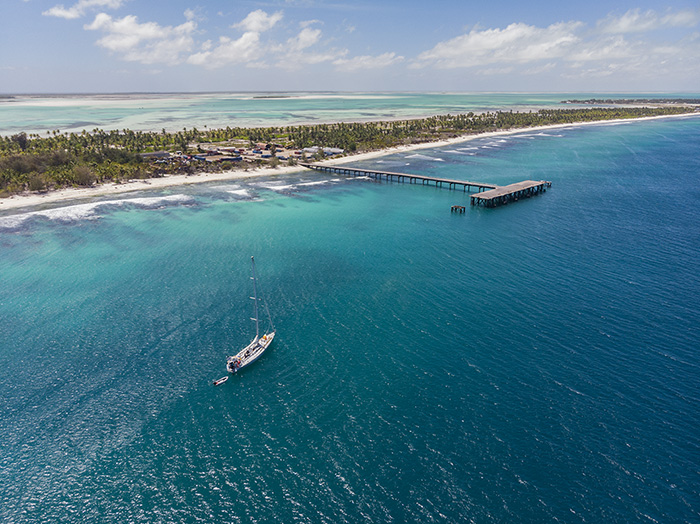 After landing in the small airport in Kiritimati, we loaded our gear onto a truck own by Timei (pronounced “SEE-may” in I’Kiribiati) and drove down the single road looping around the island. The truck rumbled and jerked as we attempt to avoid the large potholes that scar the road as children run along the sides bouncing new tennis balls, gifts from some visiting fishermen.

Kiritimati is the largest atoll in the world, with one massive lagoon and numerous small saltwater ponds surrounded by a semi-circle of land elevated enough to collect a groundwater in a formation called a fresh water lens. These lenses support plant and human life on atolls and are vital to the survival of island nations like Kiribati.

We met up with Eric Loss, the captain of Sea Dragon, who brought us to a pier near their anchorage. From there we scaled down a rickety ladder into one of the two tenders that the ship carries and finally arrived on board. Sea Dragon, once raced as a sailing yacht in the Southern Ocean, is 73 feet long and staffed by a crew of five. While aboard, we will help sail the ship to PIPA. Eric has cleared all the customs hurdles to depart, and after a short visit from a Kiritimati government photographer, we were ready to depart.

As the newest crew members, it was Michael’s and my job to hoist the mainsail that, although easy at first, both of us were straining and sweating as more and more of the sail unfurled. Eric set a course for Kanton, and we departed and, jet-lagged as we are, the watch schedule starts immediately—four hours on, eight hours off. There is a sense of tired excitement among all aboard as we set out for the Phoenix Islands, still six days away.