Comparative biology and evolution of the aryl hydrocarbon receptor (AHR)

Halogenated aromatic hydrocarbons (HAHs) and polynuclear aromatic hydrocarbons (PAHs) are ubiquitous environmental contaminants implicated in adverse effects on human health. These compounds cause toxicity by activating the aryl hydrocarbon receptor (AHR), a ligand-activated transcription factor. The AHR is part of an metabolic system that evolved to detect aromatic hydrocarbons and initiate an adaptive response, but it also has physiological roles regulating vascular development, immune function, and cell growth, suggesting possible mechanisms by which chemical exposure could cause toxicity.

To understand these diverse functions and the possible role of AHR in mediating toxicity, we have studied the biology of the AHR in diverse species. We’ve found that vertebrate animals are characterized by the expansion and diversification of AHRs, via gene and genome duplications, from the ancestral protoAHR into at least five classes of AHR-like proteins: AHR, AHR1, AHR2, AHR3, and AHRR. The evolution of multiple AHRs in vertebrates coincided with the acquisition of high-affinity binding of halogenated and polynuclear aromatic hydrocarbons and the emergence of adaptive functions involving regulation of xenobiotic-metabolizing enzymes and roles in adaptive immunity. The existence of multiple AHRs may have facilitated subfunction partitioning and specialization of specific AHR types in some taxa. Additional research in diverse model and non-model species will continue to enrich our understanding of AHR and its pleiotropic roles in biology and toxicology.

We study AHR in a variety of species. 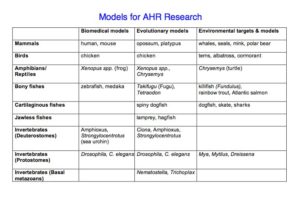 The evolutionary history of AHR genes, as inferred from studies in extant species, is shown in this figure. 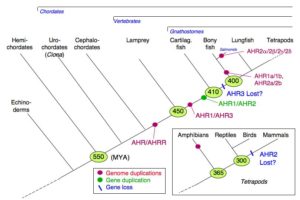 This research has been supported for many years by the National Institute of Environmental Health Sciences.

The research has been performed in collaboration with many colleagues. See publication lists for their names.

A few of the key papers resulting from this work are listed below.