Biodiversity in the deep ocean 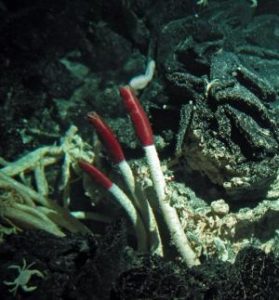 Tubeworms, crabs, and other fauna at a hydrothermal vent on the East Pacific Rise, as photographed through HOV Alvin's viewport (LADDER 1 cruise, Woods Hole Oceanographic Institution)

My work in deep-sea biodiversity addresses “species” and “habitats” (the same two sub-goals of the biodiversity goal of the Ocean Health Index). For “species,” my expertise is mainly benthic invertebrates. For "habitats," in the past decade I have focused on deep-sea hydrothermal vent fields. I co-authored the chapter on vents and seeps for the first United Nations World Ocean Assessment. 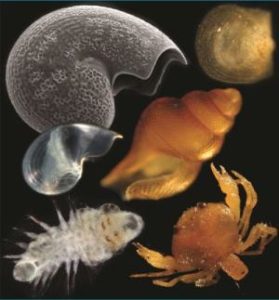 Hydrothermal vents in the Pescadero Basin

This project funded by the Dalio Explore Fund included a research cruise in Nov. 2017 to hydrothermal vents in the Pescadero Basin, Gulf of California. The biological component of this multi-disciplinary project is motivated by: How are the differences in macrofaunal community structure governed by the unique geochemical regimes at Pescadero Basin, and what are the implications for the connectivity and biogeography of deep-sea communities?

In 2009 the U.S. established its first Marine Protected Areas for deep-sea hydrothermal vents in the Marianas Trench Marine National Monument. These vents are distributed along the Mariana volcanic arc and back-arc spreading center. We participated on R/V Yokosuka cruise YK10-11 with HOV Shinkai 6500 in 2010 and by telepresence on a NOAA Okeanos Explorer cruise in 2016.

I conducted an interdisciplinary project "Assessing the values of ecosystem services at deep-sea hydrothermal vents," with Porter Hoagland (Marine Policy) and Chris German and Maurice Tivey (Marine Geology and Geophysics Dept.), funded by The Joint Initiative Awards Fund from the Andrew W. Mellon Foundation. We recently published a chapter in Natural Capital and Exploitation of the Deep Ocean.

In association with this project, I presented with colleagues Thomas Graedel (Yale Univ.) and Mark Hannington (GEOMAR) a session titled "(When) Should We Mine the Seafloor?" at the 2017 AAAS Annual Meeting. 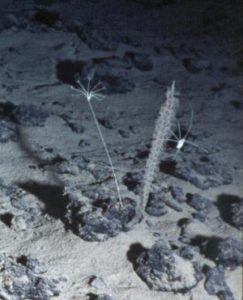 A stalked octocoral, perhaps a seapen with an isopod on it, and polymetallic nodules at 5000-m depth at H2O. (K. Smith, MBARI, and S. Beaulieu, WHOI)

Benthos at abyssal depths under the North Pacific Subtropical Gyre

Biodiversity at hydrothermal vents on the Galapagos Rift