Data collected by an autonomous Ice-Based Observatory that drifted in the Eurasian Basin between April and November 2010 indicate that the upper ocean was appreciably fresher than in 2007 and 2008. Sea-ice and snow melt over the course of the 2010 drift amounted to an input of less than 0.5 m of liquid fresh water to the ocean (comparable to the freshening by melting estimated for those previous years), while the observed change in upper-ocean salinity over the melt period implies a fresh-water gain of about 0.7 m. Results of a wind-driven ocean model corroborate the observations of freshening and suggest that unusually fresh surface waters observed in parts of the Eurasian Basin in 2010 may have been due to the spreading of anomalously fresh water previously residing in the Beaufort Gyre. This flux is likely associated with a 2009 shift in the large-scale atmospheric circulation to a significant reduction in strength of the anticyclonic Beaufort Gyre and the Transpolar Drift Stream. 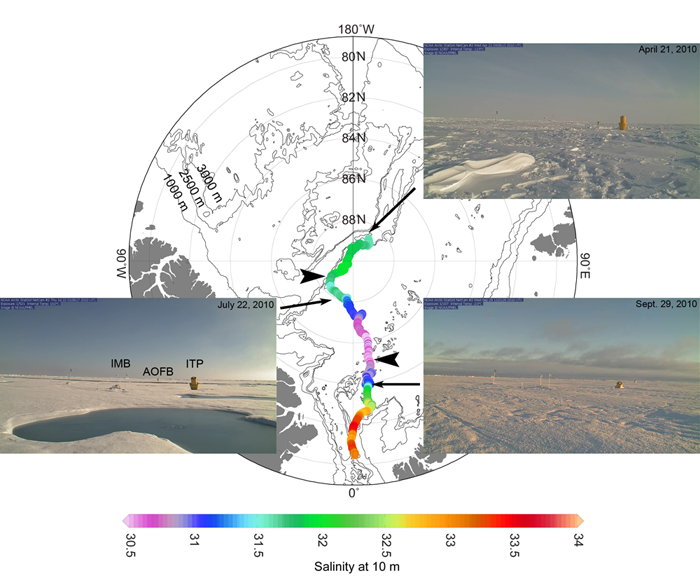 Drift track of the IBO between April 19, 2010 and November 10, 2010 indicating ITP salinity at 10 m. The 1000, 2500 and 3000 m isobaths have been plotted using the IBCAO grid. Images are from the NOAA/PMEL web camera installed on the same floe. Black pointers indicate the IBO location at the start and end of the melt period.