ITPs deployed between 2004 and 2006 have made 21 anticyclonic eddy encounters in the central Canada Basin of the Arctic Ocean (figure 1).  The 12 to 35-m thick eddies have center depths between 42 and 69 m in the Arctic halocline, and are shallower and less dense than the majority of eddies observed previously in the central Canada Basin.  They are characterized by anomalously cold temperatures and low stratification, and have horizontal scales of the order of, or less than, the Rossby radius of deformation (about 10 km) (figure 2).  Maximum azimuthal speeds estimated from dynamic heights (assuming cyclogeostrophic balance) are between 9 and 26 cm/s, an order of magnitude larger than typical ambient flow speeds in the central basin (figure 2).  Eddy temperature, salinity and potential vorticity properties, as well as horizontal and vertical scales, are consistent with their formation by instability of a surface front at about 80N that appears in historical CTD and XCTD measurements.  This would suggest eddy lifetimes longer than 6 months.  While baroclinic instability of boundary currents cannot be ruled out as a generation mechanism, it is less likely since deeper eddies that would originate from the deeper-reaching boundary flows are not observed in the survey region. 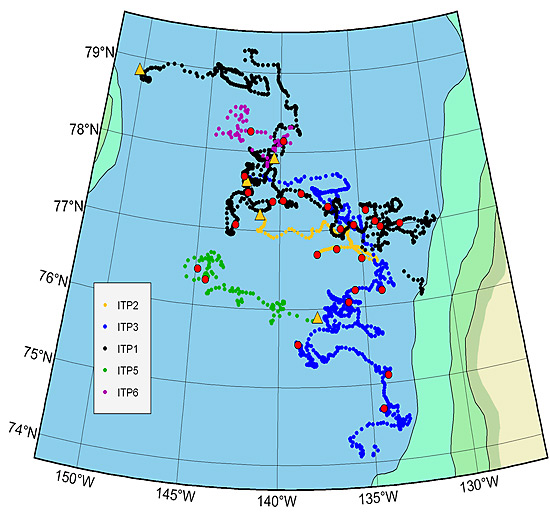 Map of observed eddy locations (red dots) and ITP profiles between August 19, 2004 and November 16, 2006. The yellow triangles indicate the start of each drift track. (M. Timmermans)

Section of potential temperature (left) and salinity (right) through a typical eddy. Lines of constant potential density (referenced to the surface) are shown in the left panel. Dotted lines in the right panel indicate profile locations. (M. Timmermans)