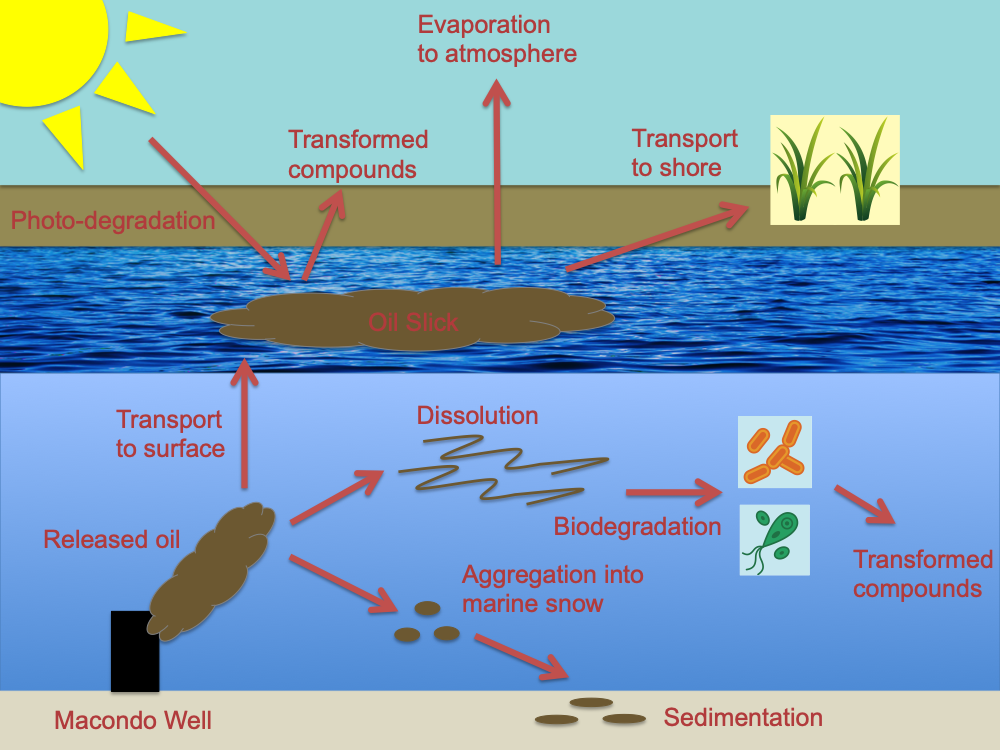 Environmental chemists talk a lot about “chemical fate.” In fact, understanding chemical fate is pretty much the point of the whole field. But what does it mean? Chemical fate describes where a chemical goes when it gets out into the environment and how it might be chemically transformed in the process. Some chemicals have a tendency to bioaccumulate, and their fate is to end up in animal tissues. Other chemicals are more likely to end up in lakes, rivers, groundwater, and oceans. Often, chemicals have complicated environmental fates, which means that they don’t all end up in the same place or in the same chemical form. A third of the total amount of the chemical released might dissolve in the water of a lake, while another quarter might end up buried in lake sediments, or undergo a chemical reaction that transforms it into a new chemical altogether. Every chemical out there has a distinct fate that’s influenced by its molecular structure and the environment it’s exposed to (kind of like how human traits are affected both by genetics and by life experiences).

It’s important to research chemical fate because chemical fate is the best tool we have for understanding and managing human health risks or environmental damage caused by chemical release. For example, the water-solubility of a chemical called methyl tert-butyl ether (MTBE), which was used extensively as a gasoline additive in the US in the 1990s and early 2000s, meant that its fate was to end up in drinking water wells around the country [1]. Given that MTBE not only makes water taste and smell terrible,but is also considered a “potential human carcinogen,” this was a problem [2]. But we wouldn’t have known that millions of people were being exposed to a potentially carcinogenic compound, or understood why or how, without conducting research into chemical fate. Understanding chemical fate helps us to take a mysterious, scary, and inexplicable phenomenon, like having drinking water come out of your faucet tasting like turpentine, and make it explicable. Once we know why and how a chemical has a certain fate in the environment, we can more effectively prevent its release or shift to using a safer chemical in its place. This is what happened with MTBE: we now use ethanol, a much safer compound, as a gasoline additive instead.

This is what the chemical structure of MTBE (methyl tert-butyl ether) looks like.

How do we figure out chemical fate? The terminology itself, “fate,” sounds mythological, as if a crystal ball or a set of divining rods were necessary to predict the future behavior of a chemical. But the real ways that scientists explore chemical fate are far more complicated and impressive. Based on the chemical structure of a compound, scientists can predict the compound’s characteristics. These characteristics include the polarity of the compound, a characteristic which influences how easily it will dissolve in water; how acidic or basic the compound is;  its volatility, which measures how easy it is to evaporate the compound; its ability to absorb sunlight, and more. All of these characteristics make up a kind of chemical personality that scientists use to understand the compound’s behavior in the environment, such how likely it is to dissolve in water or to evaporate into the atmosphere. At the same time, scientists also have to study the environmental processes to which the chemical might be exposed. For example, the chemical might be released into a water body with strong currents that rapidly transport the chemical to shore. The chemical might be released in an area with high light exposure that could make chemical reactions caused by sunlight likely, or an area with extensive cloud cover and very low light exposure that would make these reactions unlikely. If chemical reactions happen that change the identity of the compound, things get way more complicated because scientists then have to take into account the new personality of the transformed compound.

It can be hard to hold all of the environmental processes that a chemical is affected by in your head at the same time, so I’ve made an example diagram modeling chemical fate for a chemical-release disaster that I’ve done a lot of reading about lately: the Deepwater Horizon oil spill in the Gulf of Mexico. In the diagram, at the top of this post, you can see the source of the oil in the broken Macondo well in the deep ocean. The oil released, which was a mixture of many chemicals, had a complicated chemical fate, indicated by the many arrows in the diagram. Some of the oil released was transported to the surface of the ocean, where it formed slicks on the surface of the water. This oil at the surface was exposed to sunlight, which caused chemical reactions that transformed some of the oil into new chemicals with new personalities and new fates (“transformed compounds”). Some of the oil at the surface was transported to the shore, where it affected sensitive coastal ecosystems such as salt marshes. Some of the surface oil also evaporated into the atmosphere. Most of the oil, however, never even made it to the surface: it remained in the deep ocean, either suspended in a plume of un-dissolved oil or dissolved into the water column. Much of this oil in the water column was chemically transformed by microbes into CO2 or other new chemicals in a process called biodegradation. Some of the oil got stuck together into clumps of oil compounds, microbes, and other debris to make “marine snow.” This marine snow rained down onto the sea floor and stuck to the sediments at the bottom, a process called “sedimentation.” A review paper with more detail on these processes is Beyer et al, 2016 [3].

Oil is made up of many organic compounds. This is what the molecular structures of a few of those compounds look like.

During the Deepwater Horizon oil spill, scientists had to work quickly to unravel which of these environmental processes most influenced the fate of the released oil to help disaster responders decide where to focus their efforts. Even after the spill ended, scientists have continued to study the fate of the oil for a decade to address previously unanswered questions about the chemical fate of the oil: How much oil is still present in ocean sediments? What effects did exposure to the oil have on aquatic life? Were the response tools used, such as chemical dispersants, effective in preventing more environmental damage? What are the effects of oil compounds that were transformed by sunlight? This kind of research allows us to respond to the lasting effects of the oil spill and to prevent such damage from occurring in the future.

The Holy Grail of environmental chemistry is predictive capability, or using our knowledge of chemical fate to understand how chemical-release scenarios like the Deepwater Horizon spill will play out before they actually happen. Having this predictive power allows us to better respond to this type of disaster when it happens. Ideally, having this predictive power would also help us to prevent this type of disaster in the first place by using safer chemicals and better containment systems.

Acknowledgements: Thanks to Anna Walsh for providing valuable feedback on an earlier draft of this post!

Thanks also to Dharni Vasudevan and Dave Griffith, the first people to explain chemical fate to me.