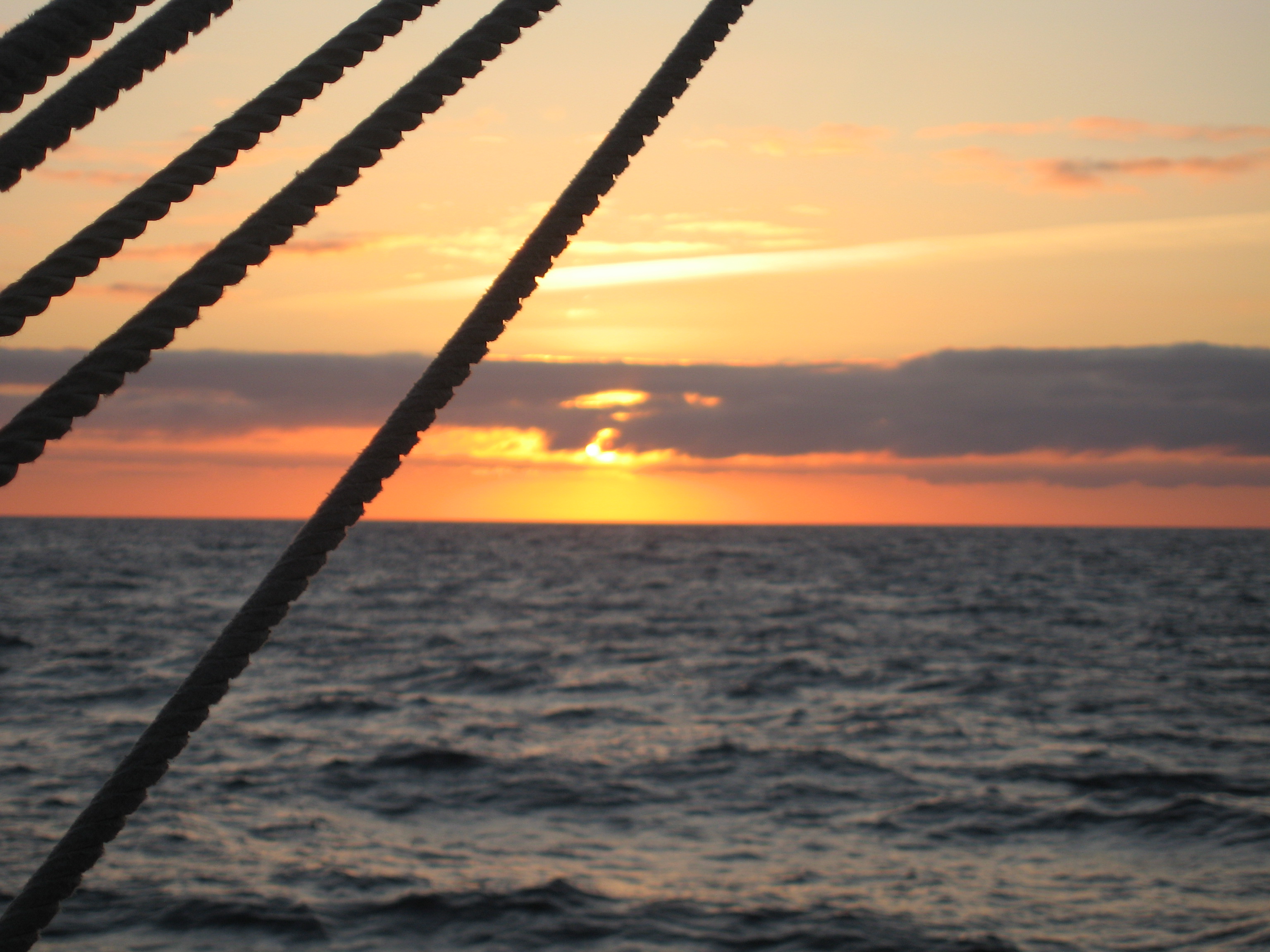 In my third week at sea, we saw two container ships in different quadrants of the horizon. I was startled and recoiled from the sight; they were the first indications of human life we had been able to see with the naked eye in about a week. One of my shipmates noticed and said, “I know. They’re watching them on radar so we don’t get closer.” I watched the ships a while longer. They were so far away that their edges blurred into the sky, but the sight of them on the gray, curved horizon had still shocked me. One was green, one orange-red. They looked like giant boxy caterpillars wiggling their way along the rim of the Earth.

I had been living in the North Atlantic Ocean for the past three weeks because I was a student with SEA Semester, a tall ship science and sailing program based in Woods Hole, close to where I work now at WHOI. Over the course of a month, I and about twenty other students, along with ten or so professional crew, sailed the SSV Corwith Cramer from Woods Hole, MA to Cork, Ireland. We sailed fast because the winds were strong for most of our voyage. Too strong, sometimes. Gales chased us nearly to Greenland in our first couple of weeks. At night we sometimes had to steer through ten-foot swells in near-complete darkness and watch the ship’s compass swing wildly as we were flung down the swells, desperate to keep on course. We slept as well as we could through the foghorn that blared every two minutes in low visibility and tried not to get flung out of our bunks in stormy seas (yes, that did happen). We didn’t rest when the seas were calmer; that was the time when we could heave-to and send down the hydrocast carousel, an apparatus with bottles to collect water samples for analysis of nitrate, phosphate, dissolved oxygen, and so forth, all down to a thousand meters of depth. That was also the time when we could cast out the Neuston net, a kind of giant butterfly net to collect whatever ocean critters were in the area, from zooplankton to jellyfish. Once we had our samples on deck, we took them into the Cramer’s tiny lab for analysis, doing our best to filter water and count jellyfish in between the occasional trip to the ship’s rail to vomit over the side.

Much of that time at sea, I thought I had gone crazy to sign up for this experience. I was also happier than I had ever been in my life. I was completely in love with my temporary ocean home.

I have been privileged to have a view of the ocean that few people get to see. Other oceanographers get to see the ocean in this way (although even many PhD students wait years for the opportunity to go to sea), but few people whose professions don’t require them to leave shore have the same opportunity. I have been thinking about what this means for how we, as a society, think about the ocean.

What is the ocean? Think about how we think about it. Oceans are the gaps on maps. On a globe with ridged mountains you can run your finger over, oceans lack topography. They are the blanks. The places where the land ends. The spaces between human political boundaries and human cultures, the spaces where there are no people. We call parts of them “gulfs.” Oceans are negative space. No wonder that in belief systems around the world, oceans or other large sources of water are a force of destruction, a punishment sent by the gods to wash away the sins of mortals. Oceans, then, are an erasure of humanity, but maybe not a perfect erasure; they are salty as if with human tears.

Oceans can be very dark places.

Oceans are absolutely essential to our survival.

To an oceanographer, or probably anyone that spends much time on the water, it’s obvious that oceans are not negative space. They are made of ecosystems just as diverse as what we see on land. In fact, we have ecosystems in the ocean, like those around hydrothermal vents in the deepest of all deep places, that are far more extreme than anything we would ever see on land. The extreme differences in light availability, in pressure, in the chemical composition of different water masses, make possible a myriad of different worlds contained in our oceans, from surface to depth. There is so much diversity, and so many variables that impact this diversity, that we have multiple subdisciplines within oceanography: physical oceanographers who study the circulation of water masses, biological oceanographers who study the organisms that live there. I fall into the category of chemical oceanographers, those who are interested in understanding how chemicals present in the ocean move, where they accumulate, how they transform over time. What we all have in common, as oceanographers, is that, to us, the ocean is not negative space. It is a system that regulates our global climate, a source of food for the planet, our primordial source of life and of an oxygenic atmosphere, a toilet for the waste products delivered by land, many of them human in nature. It’s a problem that, as a society, we see oceans as negative space, not recognizing all that they do for us.

I study human-sourced organic molecules in the ocean, particularly oil. From a scientific standpoint, the ocean I see is a complex, heterogeneous mixture, a soup of salts and organics, present as both visible particles and invisible, dissolved species. In lab I work in, we have to sort through that morass and simplify it. We can’t study everything at once, so we have to isolate just the oil molecules we care about, so we can analyze them. It’s not easy. It involves a lot of filtering, extracting, dissolving, and evaporating. Then, after we do all the work of isolating our chosen molecules and analyzing them, we have to build the system up from the ground again. We have to consider how the original soup of salts and organics all around our oil molecules may have interacted with them. We have to consider that the ocean is not a mixture that’s kept in a flask in a dark fridge; it is exposed to changing conditions, including jolts of energy provided by sunlight shining down on the sea surface. With all the variables in composition and climate, the ocean is a chemist’s worst nightmare. It’s so complicated! This is why it is so fascinating. The ocean is not a gulf, not a gap, not an emptiness—it is a world we have not learned how to look at.

That day at sea, when I saw the container ships on the horizon, I was so surprised by the sight because I realized how unnecessary they were. You might think that the landscape gets boring to look at when you are in the middle of the ocean, but this was not my experience. Every day, even every hour, brought new textures to the waves, new cloud types in the sky, new marine life jumping up to greet us. The container ships looked foreign on the horizon. I had enough to process in my visual sphere without them. The ocean provided plenty of material to work with.