Science in the Time of Coronavirus has involved, for me at least, a lot of reading and writing. It’s hard, having come to graduate school hoping to do research on real-world environmental problems, to put that work aside and wait. But that is exactly what we have to do, for now, while the people who went to school to learn how to deal with real-world health problems do their work to protect us. The lights in the photochemistry lab I work in at WHOI are dark, for now.

This doesn’t mean, however, that science has completely halted in the time of coronavirus. While at home, I’ve been reading about the concept of phototoxicity, and working on understanding its implications for marine organisms affected by anthropogenic pollutants.

Phototoxicity is a phenomenon in which exposure to sunlight causes chemicals to be more toxic than they are in the dark. You can see this definition in the breakdown of the word: “Photo” is light, so “phototoxicity” is toxicity caused by light. Phototoxicity can affect humans: Taking certain medications or rubbing some essential oils on your skin can have the side effect of making you more sensitive to sunlight [1]. I first learned about phototoxicity in the human context. When I lived in Mexico, my host mother, an incredibly caring woman who was concerned by my habit of running outside in the Yucatecan sun, warned me about it. She had had a previous student who made the mistake of getting lemon juice all over her hands during a cooking project only to run outside immediately afterwards and spend all afternoon in the sun. Her hands, my host mother said, didn’t burn the way the sun usually burns; instead they burned to literal whiteness, with all pigmentation gone. I was unfamiliar with phototoxicity at the time, but have since learned that lemons contain phototoxic components (although I haven’t been able to verify skin bleaching as a symptom of phototoxicity) [2]. My host mother didn’t know the word phototoxicity either, but she knew what had happened to her previous student. This story is a good example of the wealth of scientifically relevant knowledge that people who don’t think of themselves as scientists can still carry with them from personal experience.

Phototoxicity happens because certain chemicals can produce harmful Reactive Oxygen Species, or ROS, when exposed to light. The chemicals do this by absorbing high-energy ultraviolet (UV) light delivered by natural sunlight, which puts the chemicals in what chemists call an “excited state.” In a chemistry sense, the excited state is caused by the promotion of electrons into higher energy levels by the energy in the absorbed light. Qualitatively, though, you can think of the excited state chemical as a toddler with a sugar rush: Both have same potential to cause a fair amount of damage, even though they might be perfectly benign in their lower-energy ground state. Like an excited toddler, an excited chemical needs to do something to dissipate its excess energy. Often, the excited chemical ends up transferring its energy to a molecule of molecular oxygen, and putting the molecular oxygen in an excited state. The excited state oxygen then dissipates the excess energy by a variety of possible chemical reactions that produce ROS. These ROS are a problem because they can attack biomolecules such as proteins, leading to what toxicologists call “oxidative stress.” Enough oxidative stress can kill cells, and enough dying cells can kill the affected organism.

Not every chemical out there can absorb light and produce ROS. An example of a class of chemicals that can do this is the PAHs, or polycyclic aromatic hydrocarbons. These organic chemicals are often found as a byproduct of combustion reactions: They are responsible for the nice char on your hamburger, but many are also carcinogenic. In some aquatic organisms, they can be phototoxic as well because they absorb sunlight via the process described above. (Note: While PAHs are not good for humans either, the effects are not the same as in the aquatic organisms I’m talking about. As far as I’m aware, at least, you are not going to get a sunburn from eating a hamburger.) A mechanism summarizing this process is shown below: 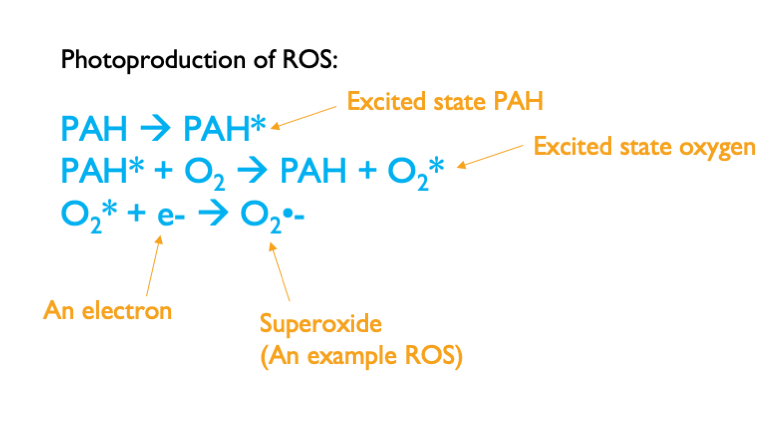 The schematic above shows the chemical reactions that produce ROS. 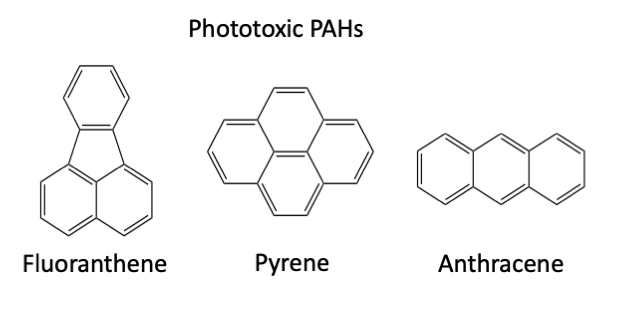 Above are some examples of phototoxic PAHs, with their chemical structures shown.

The phototoxicity of PAHs is relevant in an oil spill scenario because crude oils contain small amounts of PAHs, which can dissolve in seawater and be taken up by fish, bivalves, and other organisms. PAHs can cause damage on their own, in the absence of phototoxicity. You can find a detailed review of their toxic mechanism by Incardona (2017) [3]. However, exposure to UV light can increase the toxicity of PAHs by more than ten times [4]. This means that PAHs can cause toxic effects at concentrations ten times lower when they are exposed to UV light than when they are in the dark. A lab study on oil collected from the sea surface after the Deepwater Horizon oil spill showed that, in the lab, this oil also caused phototoxic effects in oyster larvae, probably due to the presence of PAHs in the oil [5].

The results from lab toxicology studies show that phototoxicity is a realistic concern after an oil spill. They don’t mean that phototoxicity necessarily happened in the Deepwater Horizon oil spill or another oil spill, because what happens in a lab does not always translate exactly to what happens in the real environment. In the environment, we have to consider whether the conditions used in lab toxicology studies are applicable and whether the real ecological effects of disasters like oil spills match what toxicologists observe in the lab. Doing that translation from the lab to the field is the job of environmental chemists. The lab-based studies give us a guide for what to look for in the field.

I’ll finish here by noting that it’s not always bad for chemicals in the environment to absorb light. One very important chemical that absorbs light is chlorophyll, the molecule that plants use to harness the energy in sunlight for photoynthesis. Like in the case of phototoxic PAHs, light absorption by chlorophyll can result in the production of harmful ROS inside the plant’s cells. Plants have adapted to this situation by producing a variety of defense chemicals that combat ROS and prevent them from killing the plant’s cells. One class of these defense chemicals are the carotenoids, which neutralize ROS either by absorbing energy from them or reacting with them in place of other biomolecules [6]. Thus, phototoxicity is not a novel situation that only affects organisms impacted by anthropogenic pollutants; it is the shadow side of photosynthesis, the process that makes most life on Earth possible.