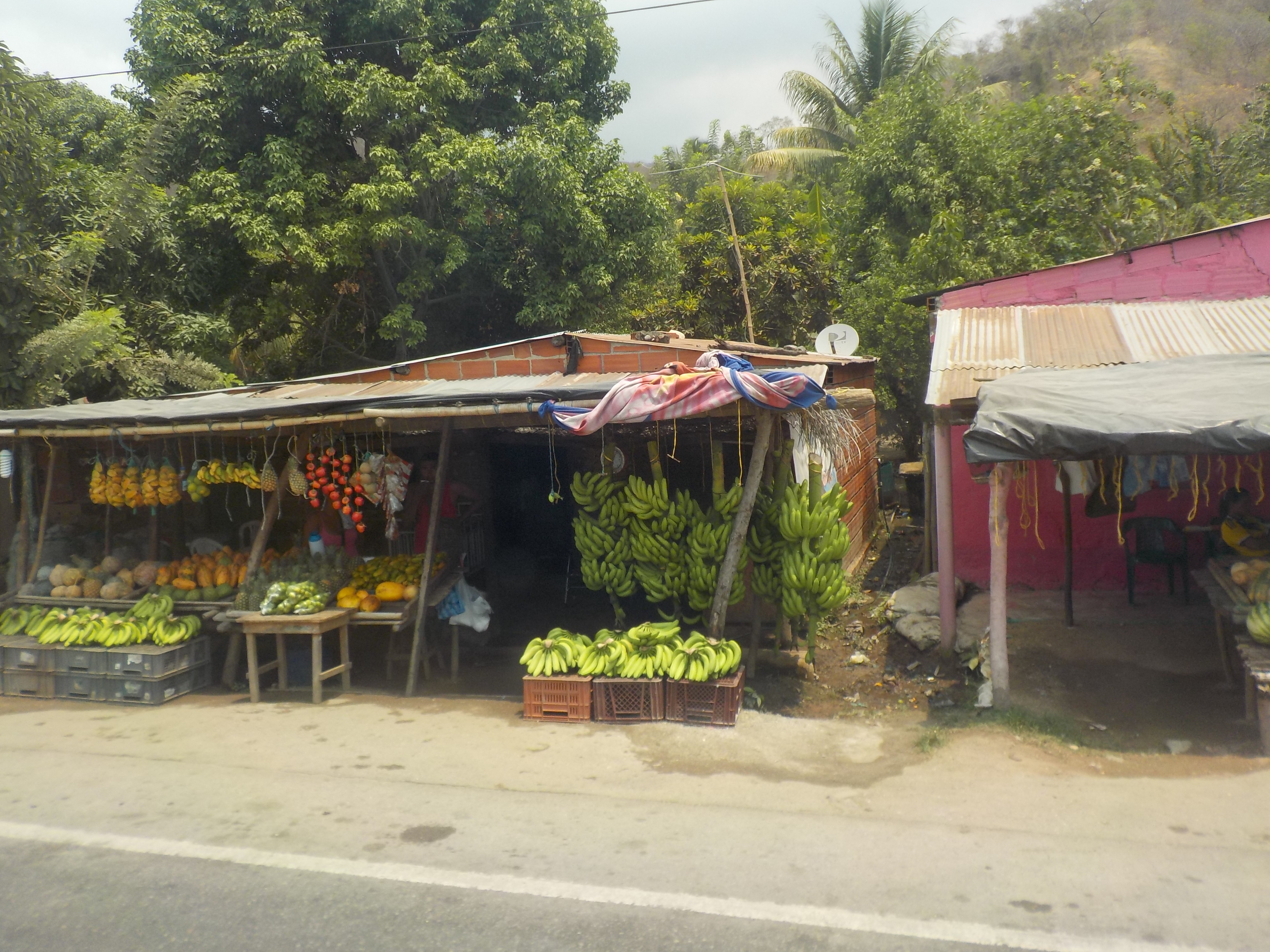 Bananas for sale along the roadside. I took this picture near Aracataca, Colombia, Gabriel García Márquez’s hometown and the town which is considered the inspiration for Macondo.

On April 20, 2010, an explosion on the Deepwater Horizon drilling rig killed eleven people and broke open the BP-owned oil well it had been drawing from in the Gulf of Mexico. This event precipitated the largest accidental marine oil spill in U.S. history. For the next 87 days, oil flowed from the broken well into the Gulf. Because the source of the oil was a well in the deep ocean, rather than an oil tanker on the surface, it was particularly difficult to stop the flow. By the time the well was plugged on July 15, an estimated 5 million barrels of oil had been released into the Gulf, causing both environmental and economic damage in the area. [1]

For many years now, scientists have studied oil and oil-contaminated sediment samples from the Deepwater Horizon spill. Their work has investigated the disaster from diverse angles. Scientists have studied the toxicological effects of the spilled oil on marine organisms and the environmental processes—from microbial degradation to light exposure—that changed the chemical identities of the released oil compounds. They’ve studied the physics around the movement of the released oil from the deep ocean to the surface, where oil slicks floated on the water. They’ve studied the composition of the released oil—a messy mixture of lots of organic chemicals—and figured out analytical tools to distinguish it from the natural, non-catastrophic oil seeps in the surrounding area.

In the scientific literature on the Deepwater Horizon spill, there is a word which is commonly repeated in text and printed into figures: Macondo. Macondo was the name of the oil well that the Deepwater Horizon  drilling rig was drawing from when it exploded; Macondo was the source of the oil that flowed into the Gulf for 87 days [2]. In the literature, the name Macondo is printed on maps, marking the epicenter of the spill. It is used as an identifier of that particular mixture of organic chemicals that distinguished the spilled oil from natural seeps. In an article I recently read, a mathematical construct called the “Macondo dissimilarity index” was used as a kind of chemical fingerprint for Macondo oil, a way of identifying Gulf of Mexico ocean sediments that were contaminated by the oil even several years after the spill actually took place [3]. Macondo has thus become a technical term in the scientific literature, a label for this particular chemical mixture, this particularly ill-fated bundle of molecules which has been linked to deaths of shorebirds, turtles, and marine mammals, to the erosion of salt marshes, to shifts in deep-sea and coastal microbial communities, to injured corals, and to public fear and confusion about the safety of seafood in the area (although luckily, in this last case, it appears that public health risks from contaminated seafood were much lower than originally feared) [4].

Of course, outside the realm of scientific journals, the word Macondo has a very different meaning, at least for those of us who enjoy reading or know a little Latin American history. The word Macondo has a rich legacy as the name of the tiny Colombian town in Gabriel García Márquez’s novel One Hundred Years of Solitude. In the novel, García Márquez traces the history of this fictional town, from its prehistoric beginning to (spoiler alert) its apocalyptic destruction. The origins of Macondo are mythological: It is introduced as a “a village of twenty adobe houses built on the bank of a river of clear water,” during a time when “[t]he world was so recent that that many things lacked names, and in order to indicate them it was necessary to point” [5]. But within a couple hundred pages, the town is thrust into a far more familiar world, negotiating the interests of warring national political parties and transnational corporations attracted by the town’s promising banana-growing climate. García Márquez used Macondo as a time-condensed microcosm of the experiences of the Caribbean Colombia he grew up in, from the era of European colonization up to the mid-twentieth century. The endless wars between political parties that care more for their own power than the public interest, the erasure of indigenous American identities, the seeming magic of technological development, and the exploitation and killings of banana farm workers—all these events in the book echo Colombian history. Many argue that the book’s themes have a wider relevance, that the experiences of Macondo with colonization, technological development, and transnational corporations would ring true to almost any small community in the global South.

In fact, “Macondo” carries so much weight in the literary world that reading this word in the context of the Deepwater Horizon spill never fails to fascinate and puzzle me. The Macondo of One Hundred Years is complex, beautiful, and tragic. The town is a character and its name carries a charge. Reading the word in scientific articles, devoid of its original meaning, gives me a funny feeling. It’s quite possible I’m the only one interested in this particular inconsequential phenomenon, and I’ll blame it on my literary education: I was an avid reader long before I was a scientist, and good readers revel in inconsequential, superstitious coincidences.

A good reader of One Hundred Years could tell you that there is something fitting about the association between “Macondo” and an unprecedented environmental disaster in brought about by a global economy that depends on continued and unsustainable resource extraction. In One Hundred Years, the resource-extraction economic mindset causes human and environmental catastrophe. The arrival of Macondo’s transnational banana company “changed the pattern of the rains, accelerated the cycle of harvests and moved the river from where it had always been,” in its zeal to bring bananas back north. This environmental change heralds the human suffering to come: The profit motive also causes a massacre of striking farm workers, after which Macondo’s fantastical climate responds with a catastrophic period of rain that lasts “four years, eleven months, and two days” [4]. The transnational banana company bails out when the flood makes continued farming impossible, leaving Macondo behind as a decimated ghost town. With that kind of precedent, how could the Macondo oil well not be destined for disaster?

When I read the word Macondo in an article about the Deepwater Horizon spill, I am reminded of how important it is for scientists to take a moment and zoom out, to put their work in the larger context of environmental change. Entire scientific articles on the Deepwater Horizon spill are devoted to the laborious identification of Macondo oil on the sea floor, or in residues on beaches, and this slow, microscopically focused work is essential to understanding the effects of the disaster. But it’s easy to get stuck down at the molecular level and lose the bigger picture. In the bigger picture, we see that environmental disasters like Deepwater Horizon or the mythological flood of Macondo are driven by the same type of thinking, a type of thinking where economic wellbeing depends on continued unsustainable resource extraction that inevitably destroys local environments and local people. With the perspective of One Hundred Years, it’s easy to zoom out and see the Deepwater Horizon spill not as an isolated event, but one puzzle piece in the larger picture of environmental change driven by an unsustainable economic model that all of us nevertheless depend upon.