The concept of a seismic cycle, where the stress on a fault repeatedly builds up over a long period of time and then is rapidly released in a large earthquake, influences studies of both the basic physics of faulting and applied research aimed at estimating earthquake hazards. This hypothesis suggests that large earthquakes might be quasi periodic and that the probability of a particular portion of a fault rupturing twice in quick succession should be low. However, this basic hypothesis has been difficult to verify owing to the long repeat times of the largest earthquakes on most faults. Moreover, in many earthquake catalogs, the process of triggering earthquakes by the dynamic/static stress changes produced by nearby earthquakes significantly effects the timing of at least the low-magnitude seismicity.  The combinination of these two effects makes it difficult to ascertain the extent to which the timing of large ruptures is regulated by strain buildup from plate tectonics, and many authors think that influence from nearby earthquakes is relatively more important in controlling the timing of ruptures.     Oceanic transform faults are an advantageous location to evaluate the seismic cycle hypothesis because their fast slip rates and the moderate size (∼Mw 6) of their largest earthquakes lead to relatively short repeat times between major earthquakes at a given spot on a fault.  Starting with my 2008 BSSA paper, we have been documenting pairs of overlapping Mw ≥5:5 earthquakes that had overlapping ruptures.  We have found that the fast slipping (~14 cm/yr) EPR transforms (Gofar, Discovery, Siqueiros) have repeat times of ~5-6 years while the intermediate (~7 cm/yr) rate Blanco transform has repate times of 13-14 years [Boettcher and McGuire GRL 2009].         We are currently developing testiable predictions to evlauate the extent to which large ruptures on oceanic transform faults are described better by an elastic-rebound type model or a Poissonian type model. 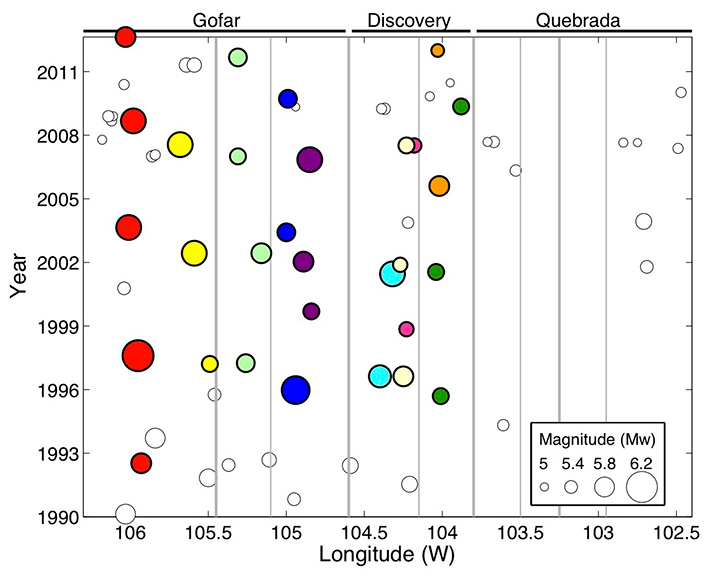 Seismic cycles on the Quebrada, Discovery, and Gofar Transform faults, East Pacific Rise after McGuire [2008] and Boettcher and McGuire [2009]. Earthquakes in the Global CMT catalog estimated longitude for the last 20+ years. Earthquakes that have been determined to have overlapping rupture areas (e.g. indistinquishable centroids) are plotted with the same color. Major and minor spreading centers are shown by thick and thin gray lines, respectively. The spacing between repeat ruptures of the same asperity is quasiperiodic with typical values in the 4.5-6 year range as would be expected for full coupling on isolated rupture patches [Boettcher and McGuire, 2009].