The emperor penguins are calling

Our title relates back to a letter from John Muir, the "Father of the National Parks,” to his sister, in 1873. The full quote, “The mountains are calling and I must go and I will work on while I can, studying incessantly” reveals a man driven by a sense of responsibility, purpose, and curiosity to understand and protect California’s Yosemite Valley. In our rapidly changing world, scientists now too, have an increasing responsibility to provide knowledge that informs legal and policy frameworks worldwide. For Antarctica, this means improving the chances that species such as the emperor penguin will survive into the next century.

The emperor penguin, currently protected through the US Endangered Species Act (ESA), is one species that has not evolved to survive the rapid effects of climate change which threaten to reshape its world. The ESA is the world’s strongest environmental law focused on preventing extinction and facilitating recovery of imperiled species; it requires that listing decisions are based on the best available science. The US Fish and Wildlife (USFWS) service formalized a Species Status Assessment process to support ESA decision-making. With that context, an international team of scientists, policy experts, ecologists, and climate scientists provided pivotal research and projections tailored for use by the USFWS for a detailed assessment of the threats posed by climate change to emperor penguins and their future survival.

This analysis was based on an evaluation of the resilience, redundancy, and representation of emperor penguins, something known as the “3 Rs”. This was used to evaluate the current condition and future persistence of the species (e.g. demography, spatial distribution, diversity) in a changing climate. The study showed that if sea ice declines at the rate projected by climate models under current energy-system trends and policies, emperor penguin 3Rs would be dramatically reduced and almost all colonies would become quasi-extinct by 2100. This is because the life cycle of emperor penguins is intricately tied to sea ice: they breed on sea ice; they use ice floes to rest, seek refuge from predators, and moult; and their prey is often within the sea ice. The scientific endeavours underpinning this work build on several decades of research by many scientists. 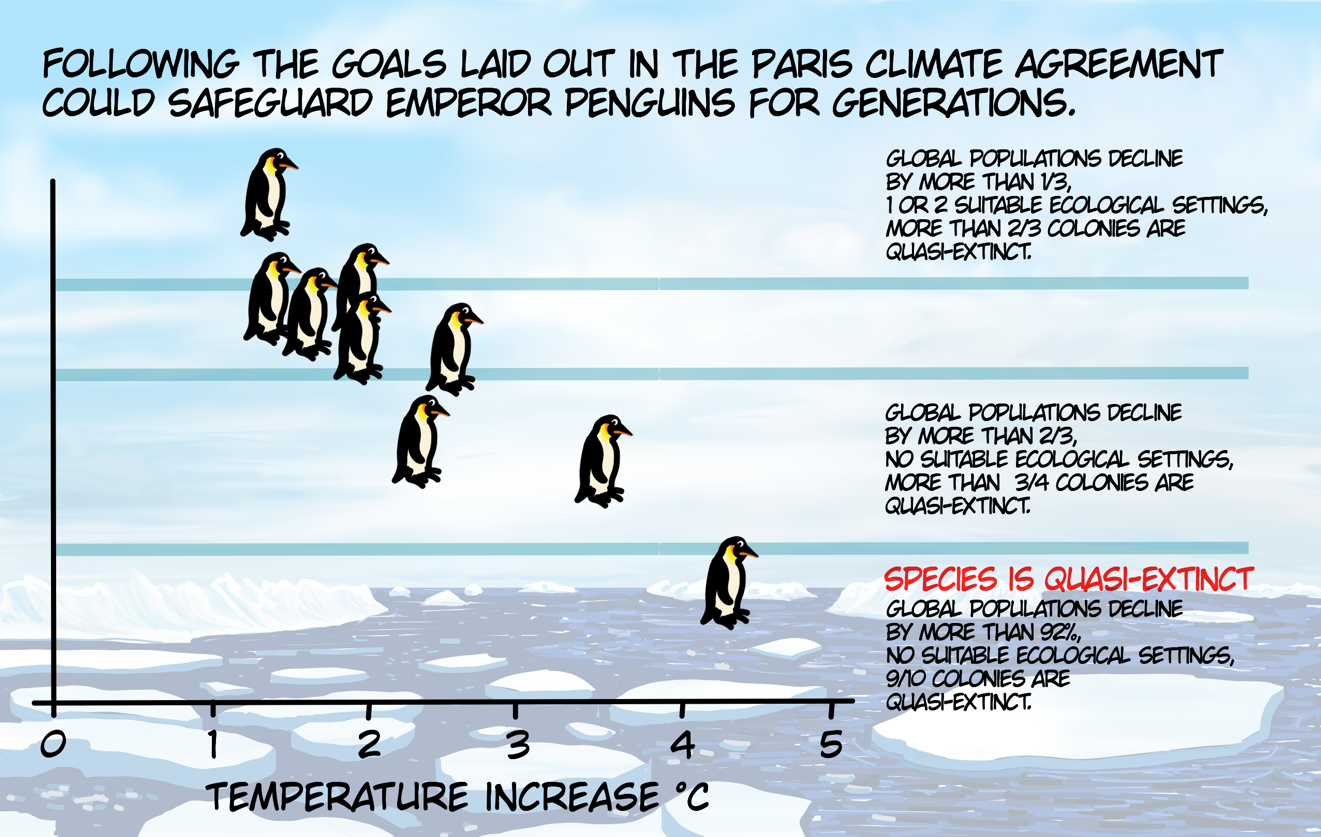 Projected 3Rs (y-axis) at different average global temperature increases (x-axis). Assessments for listing species under the ESA require information about how species resiliency, redundancy and representation (3Rs) will be affected by threats within the foreseeable future. Our results show that if sea ice declines at the rate projected by climate models under current energy-system trends and policies, the 3Rs would be dramatically reduced and almost all colonies would become quasi-extinct by 2100. We conclude that the species should be listed as threatened under the ESA.

Emperor penguins are adapted to conditions that humans would find extreme: they live in delicate balance with their environment, and are therefore living indicators of environmental change in the Antarctic. I first saw an emperor penguin when I visited France’s Dumont D’Urville Station at Pointe Geologie, Antarctica, during my PhD studies. As soon as I set foot on the island, before our team unpacked our gear, my colleagues and I went to visit the emperor penguin colony located only a couple of hundred meters from the station—the same colony featured in the movie “The March of the Penguins.” We sat far away to observe them through binoculars, but after 15 minutes, a few penguins approached us. People think that they are awkward, almost comical, with their hobbling gait, but emperors walk with a peaceful and serene grace across the sea ice. I can still feel them tugging on my shoelaces, their eyes flickering with curiosity and the sun’s rays dancing off their sleek plumage. I hope my children and future generations have a chance to meet these masters of the frozen world, and I can not imagine Earth without them.

During my PhD at the French National Centre for Scientific Research, I first studied fluctuations in the Pointe Geologie population. I was fortunate to have access to the only data set covering the life histories of emperor penguins since the 1960s, thanks to long-term monitoring by my PhD advisors, Henri Weimerskirch and Christophe Barbraud. Those data are necessary to disentangle the effect of anthropogenic climate change from natural variability. We found that the population at Pointe Geologie declined by half in the late 1970s because mortality of male emperor penguins increased, and that the population never fully recovered from massive breeding failures—something that has been occurring more frequently. We also found that both mortality and reproduction are influenced by sea ice conditions, and there is a sea-ice “Goldilocks zone”: If there is too little sea ice, chicks can drown when sea ice breaks up early; if there is too much sea ice, foraging trips become too long and arduous, and the adults and chicks may starve. 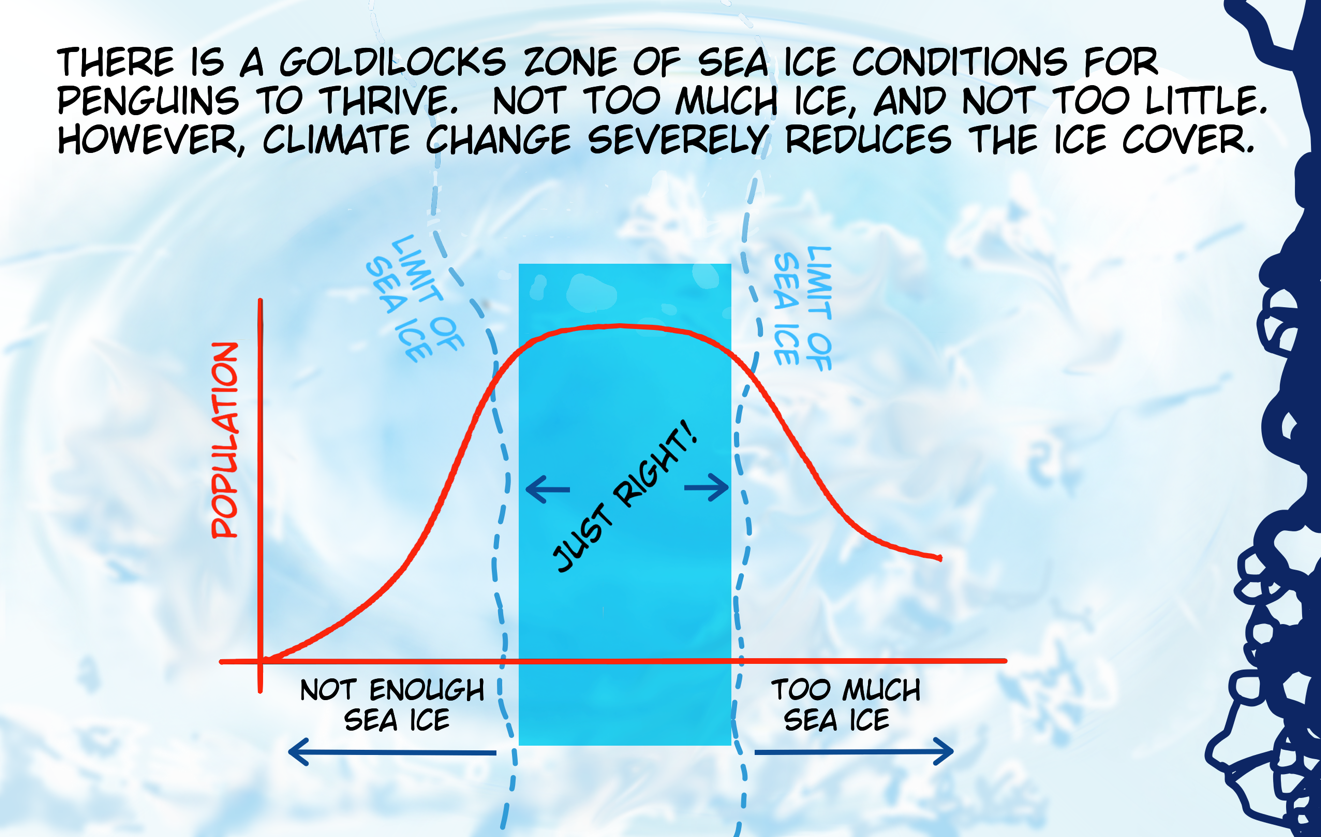 Population growth rate (y-axis) at different level of sea ice (x-axis). There is a goldilocks zone of sea ice conditions for penguins to thrive. Penguins need water openings within sea ice to feed but also thick stable sea ice as a safe platform to raise their chicks.

To predict what will happen to emperor penguins in the future, I moved to the US to work with demographer Hal Caswell and sea ice experts Marika Holland and Julienne Stroeve. By linking a demographic model of emperor penguins to climate models and including as many sources of uncertainty as we could, we concluded that the colony of Pointe Geologie will be marching toward extinction by the end of the century.

As a natural optimist, I thought penguins may disappear at Pointe Geologie, but viable populations may persist elsewhere in Antarctica where sea ice losses are projected to be much less severe, such as the Ross Sea. So with my colleagues, we projected the viability of all known emperor penguin colonies. Unfortunately, we found that although some colonies will experience much less severe declines, every emperor penguin colony will be declining by the end of the century if greenhouse gases continue their current course.

But penguins are smart. They must, I thought, be able to find more suitable habitat, and this may moderate their projected global population decline. Although there is some evidence from satellite imagery that movement may occur between colonies, we do not know much about emperor penguin movements, as this requires long-term data from multiple locations about a species that lives in the most remote place on Earth. So I teamed up with a mathematician, Jimmy Garnier, to develop a complex meta-population model that incorporated every possible type of behavior in order to assess their ability to adapt to changing environmental conditions. We assumed that penguins will leave unsuitable habitat, that they could explore for new habitat over short or long distances, and that they could choose a habitat that maximizes their fitness. Unfortunately, none of these behaviors reversed the anticipated global decline we projected in previous studies.

More recently, we included the effect of major environmental perturbations that have been documented from satellite imagery, such as late formation and early loss of the sea ice on which colonies are located. A dramatic example, is the recent collapse of Halley Bay, the second largest colony in Antarctica, where more than 10,000 chicks died in 2016 because sea ice broke up too early. The colony has not yet recovered. By including those extreme events with Phil Trathan, Peter Fretwell and Michelle LaRue, we projected that 98% of colonies will be extinct by 2100 if GHGs continue their present course and the global population will decline by 99% compared to its historical size.

Still, I thought it cannot be too late. If emperor penguins do not have the capacity to adapt, perhaps we could halt their march to extinction with climate mitigation. So, Marika Holland and I used special runs of climate models developed at the National Center for Atmospheric Research that were specifically designed to assess the effects of the Paris Climate Agreement targets on Antarctica. Our results showed that meeting the Paris targets would provide refugia for emperor penguins, effectively halting dramatic global population declines. When I got the results, I remember running to Marika’s office, and saying with a big smile, “We can do it! Emperor penguins can persist if we met the Paris Agreement.”

But are we on track to meet the Paris Agreement? The Climate Action Tracker shows that the current policy pathways have a greater than 97% probability of exceeding 2°C. Recent actions, including the announcements at President Biden’s Leaders Summit on Climate, have improved this estimate and the increase is now estimated to be “only" 2.4°C. The effect of more stringent net-zero emissions targets adopted or under discussion in 131 countries could result in a warming as low as 2.0°C by 2100.

So it appears that the emperor penguin is now the proverbial “canary in the coal mine” that signals how society is acting to control GHG emissions. The future of emperor penguins, and much of life on Earth, including humanity, ultimately depends upon the decisions made today. For now, though, we have one lone voice calling us to act. Will we listen to the call of emperor penguins?