Winners and Losers? Not all species respond in the same way.

The population responses to sea ice among species can be contrasted because species have different life strategies (i.e. different behaviors and various investments in growth, reproduction, and survival). For example, the population of emperor penguins is more sensitive to decreases in sea ice conditions than the population of snow petrels. Emperor penguins breed almost annually and their adult survival decreases during years with low sea ice conditions. On the contrary, petrels skip reproduction during years with low sea ice conditions rather than compromising their survival and future opportunities to reproduce (Jenouvrier et al. 2005).

The population responses to sea ice can be also contrasted because species use different habitat.  For example, emperor penguin and adélie penguin are dependent on different aspects of the sea ice environment. During winter, emperor penguins need fast ice (i.e. sea ice locked to the coast, islets or grounded icebergs and motionless) to breed and nearby polynyas (i.e. areas of ice-free waters within sea ice cover) to feed, whereas adélie penguins nest on ice-free and snow-free land during summer and need persistent but divergent pack ice to feed (Ainley et al. 2011).

To provide general insights into the population responses to future climate change, our goal is to address fundamental comparisons:

Things become even more complex as individuals within a population may show contrasted responses to climate change (Jenouvrier 2015).

Individuals differ in many ways.

Some are big, others small.

Some breed early, others later.

Most produce few offspring; a handful produce many.

Some die early; others live to old age.

Individuals within a population may vary in their ability to respond to environmental variations according to their phenotypes (the set of observable characteristics of an individual such as behavior or physiological characteristics). There is now ample evidence that individual plants and animals respond to global change through changes in their functional traits (e.g. phenology, body size, foraging behaviors) and demographic rates (e.g. survival, fecundity), which have important consequences for populations. Our goal is to unravel the effects of environmental conditions on populations through their impact on functional and demographic rates (Jenouvrier et al. 2018b).

Furthermore, there is more to individual variation than meets the eye of the biologist. Even among individuals sharing identical traits, the age at death or the total number of offspring raised during a lifetime will vary due to individual stochasticity, i.e., to chance.  Quantifying the contributions of heterogeneity and chance is essential to understanding natural variability (e.g. Jenouvrier et al. 2018a). 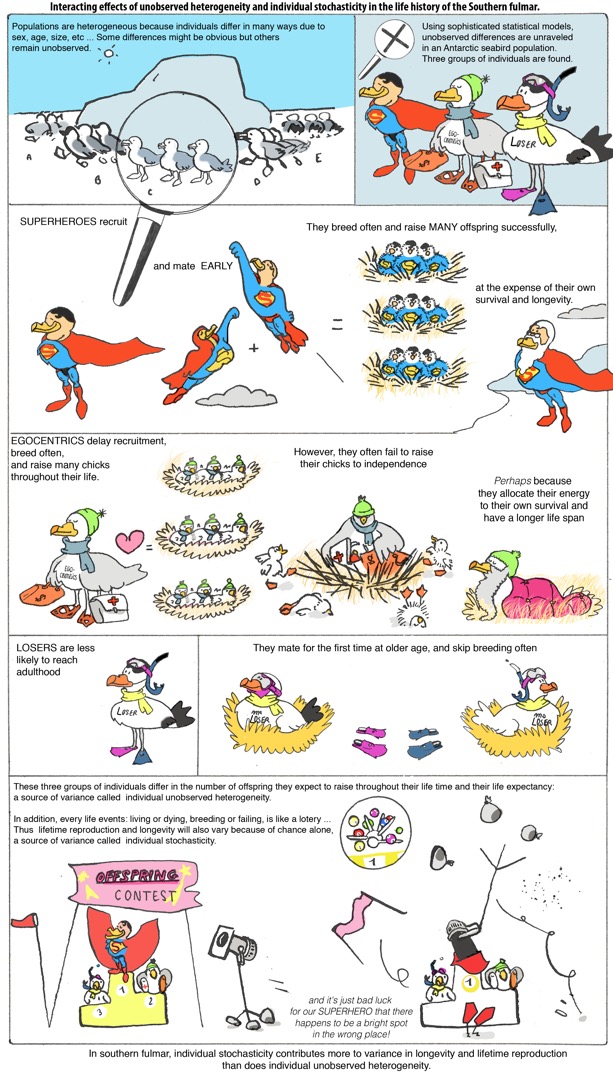