Onset of wintertime cooling brings dramatic changes to the structure of coastal and shelf waters. The mixed layer deepens, penetrating to the bottom in shallow regions. As a result, a complex structure of mixing fronts evolves. This dynamic nearshore structure, in turn, has a profound effect on coastal circulation and the distribution of biological and biogeochemical resources on the continental shelf. The depth of the mixed layer penetration and configuration of an emerging mixing front is determined by a number of interconnected factors: background temperature and salinity distribution, surface heat and freshwater fluxes, tidal and wind mixing.

We are conducting a detailed study of wintertime changes in stratification of coastal waters east of Cape Cod, MA, the relationship of these changes to atmospheric forcing, and their effect on the coastal and offshore ecosystems. The study involves the intensive use of Autonomous Underwater Vehicle (AUV) REMUS, combined with hydrographic, remote, and moored observations. 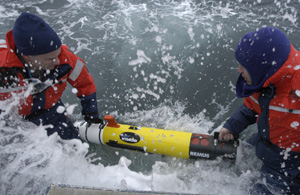 Glen Gawarkiewicz, right, and Al Plueddemann deploying REMUS in January 2005 off the diving platform of Tioga to do a hydrographic survey in shallow water off the east coast of Cape Cod. (Photo by Chris Linder, Woods Hole Oceanographic Institution)

The questions we want to answer are the following: