Oceanographic research of yesterday usually made observations in small slices making it expensive, time consuming and difficult to understand the big picture. Today, new generation AUVs have increased capabilities of going further in to the depths of our unexplored oceans. A remote underwater docking station designed here in the OSL will serve as an underwater garage where the vehicle can return to recharge its batteries, download its data and stand by for months waiting for instructions for its next mission. These dockings stations coupled with ocean observatories like LEO-15 will enable scientists to more readily study less known ocean events. The implementation of docking stations in remote areas may play a key role in learning about how our changing oceans affect climate change. These 'parked' vehicles can wake up during a geological event like an earthquake and inspect there impact on fault lines. Also, they can wake up when they sense a chemical plume and track it back to its source. Docking stations will save time, money but, will most of all, give us a more intimate look than we have ever had before into the mysteries of our oceans and their health.

Today we have successfully designed and built a REMUS docking station. Field tested in Woods Hole, we recently returned from a field operation where REMUS completed a mission, then docked itself in the underwater station where it recharged its batteries, downloaded its data and then preceded to undock itself for its next mission. Ultimately, REMUS docked successfully 100% and all systems were green! 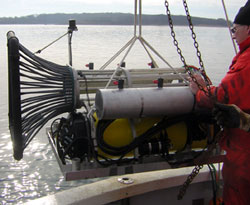 Ben Allen (WHOI) guides the REMUS Docking Station from the ship's transom into the waters outside Woods Hole. 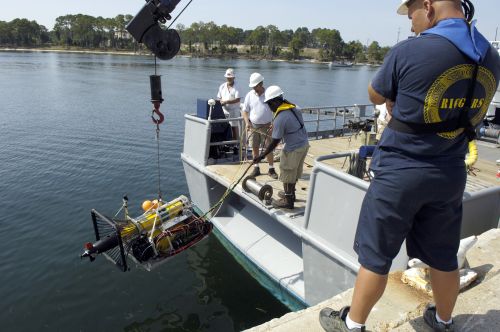 A REMUS-100 Seafloor dock is deployed off a ship's transom with the vehicle inside in order to do a preliminary system checkout. 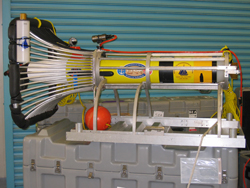 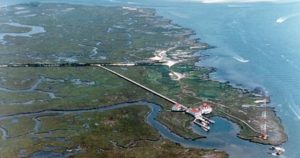 » A Well Sampled Ocean: A LEO Approach
From Oceanus Magazine