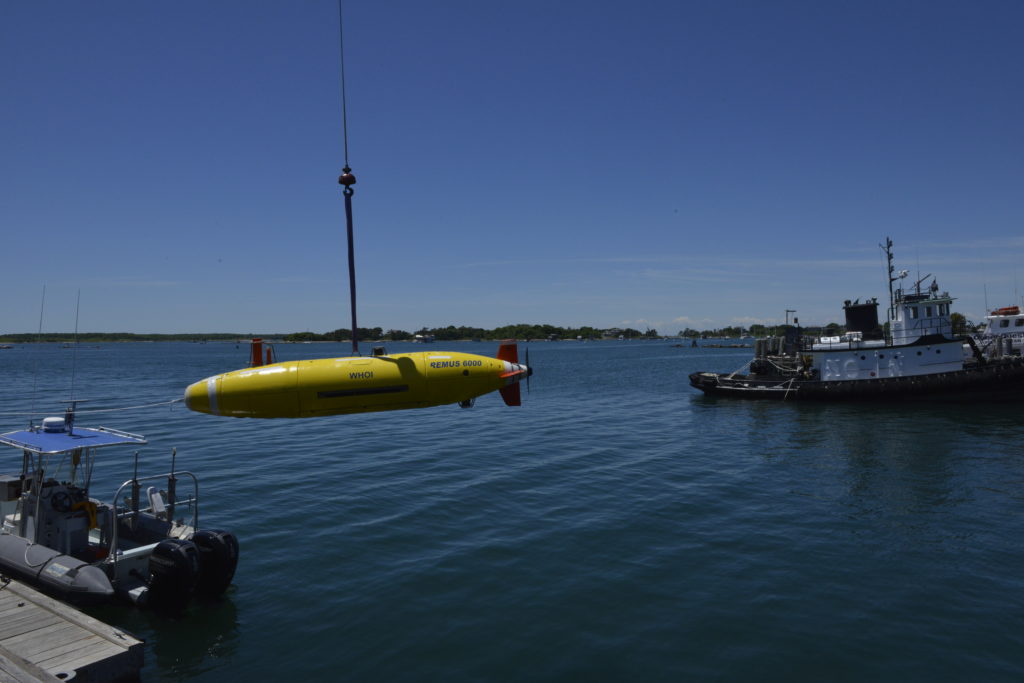 The REMUS 6000 —the largest of the REMUS vehicles— provides ample space and power for even the most challenging applications. The AUV has the ability to travel farther, go deeper, and carry a more complex set of sensors, but it boasts the same proven software and electronic subsystems found in the highly successful REMUS 100 AUV. The vehicle’s launch and recovery system is designed to function off the stern of a ship and can be set up for shipboard operations within a few hours.

This efficient AUV can be used for numerous exploration and mapping purposes, including hydrographic surveys, environmental monitoring, debris field mapping, search and salvage operations, and scientific sampling and mapping.

The vehicles use acoustic navigation to independently survey an area, while sensors sample and record data. After data from a large-scale survey is analyzed and smaller fields of interest are identified, the REMUS 6000 can gather more detailed, up-close images using high-resolution imaging systems located on the bottom of the vehicle.

The REMUS 6000 was designed under a cooperative program involving the Naval Oceanographic Office, the Office of Naval Research, and the Woods Hole Oceanographic Institution (WHOI) in support of deep-water autonomous operations.

Consists of accelerometers and gyros which measure the vehicle’s movement in three directions (surge, sway, heave), and three rotations (roll, pitch, yaw), just like an airplane or a rocket to determine the vehicle’s velocity and current mission travel distance.

Integrates data from other instruments to calculate a “best estimate” of the vehicle’s actual location.

Uses pulses of sound bounced off of the seafloor to determine the vehicle’s altitude and ground speed.

Uses pulses of sound sent in the direction the vehicle is headed that bounce off of obstacles in its way, determining the need for evasive action to maneuver around an obstacle.

Communicates through “pings” with pre-laid Deep Ocean Transponders (DOTs) to determine the vehicle’s location relative to its pre-programmed route.

Enables shipboard ops to send and receive data from the vehicle via multiple pulses similar to Morse code.

Allows for clear communications in any vehicle position via either the upper or lower instrument.

Enables shipboard ops to send data to the vehicle via multiple pulses similar to Morse code.

Consists of a 3-way antenna that allows the vehicle, when at the surface, to determine its position using GPS.

Connects the vehicle’s system to the shipboard computer via a WiFi connection, or Iridium satellite phone connection.

Enables the vehicle to “phone home” with its location, if it becomes lost.

Consists of two arrays of transducers (underwater speaker/microphones) that look out and down on either side of the AUV.

Illuminates the seafloor via sound waves, using “pings” to assemble a 2D image of the seafloor and the objects resting on it.

Snaps digital photographs when the vehicle is within 10 meters of the seafloor, synced with strobe light just like a flash bulb on a typical consumer camera.

Tags photos with position and time and stores them in an onboard hard drive, download-able at the surface.

Consists of multiple sonar beams which “ping” the seafloor at different angles, creating a 3D image of its contours and shape.

Uses a powerful sound beam to look at what’s buried under the sediment on the seafloor.

Measures conductivity (the saltiness of the water), water temperature, and vehicle depth.

The titanium internal spine (called a strongback) provides structural support and a frame to which all the instruments, motors and electronics are secured in water-tight, pressure-resistant metal cans.

The outside hull consists of large blocks of syntactic foam (in yellow) that provide flotation, are impenetrable by water and do not crush at depth under extreme pressures.

Provides a safe structural lifting point for pulling the vehicle out of the water.

Holds the vehicle computer and its lithium-ion batteries that provide a rechargeable, lightweight and efficient power source. 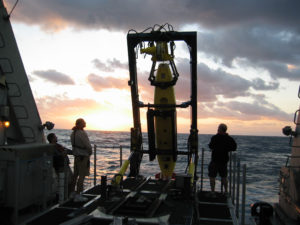 Members of the CATALYST ONE expedition team prepare for a sunrise launch in December 2008 of one of two 6,000-meter autonomous underwater vehicles (AUVs), owned by the Waitt Institute for Discovery. The AUVs were developed at WHOI and were used by scientists at Harbor Branch Oceanographic Institute to create the first-ever high definition side-scan sonar maps of deep-water Lophelia and Oculina coral reefs off the coast of eastern Florida. The expedition was the first in a new partnership between WHOI and the Waitt Institute for Discovery to make available to a wide range of science users a versatile and highly portable deep-sea tool kit and operations team that is rapidly deployable all over the world. (Photo by Mike Purcell, Woods Hole Oceanographic Institution)