Groundwater discharge appears to be an important factor for determining the chemistry of the coastal ocean. As fresh groundwater flows toward the sea, it rises up over denser, salty water. The fresh and salty water mix along the interface, and the resulting fluid discharges at the shoreline. This interface between underground water masses has recently been described as a “subterranean estuary,” a mixing zone between fresh and salty water analogous to the region where a river meets the ocean.

A variety of reactions and transformations both inland and near the coast can influence the amount of dissolved chemicals passing through this underground estuary. Nitrogen, phosphorous, and other contaminants may be introduced into groundwater through a variety of mechanisms. Wastes and nutrients leach from septic systems. Rainfall carries atmospheric pollutants and ground spills down through the soil. Eventually, these chemicals flow underground toward the ocean just as they do in surface tributaries.

Once these dissolved chemicals reach coastal waters, they can influence the abundance of plants and other living species. It is not unusual, for instance, for groundwater to contain dissolved nitrogen in concentrations 100 to 1,000 times greater than in seawater. Nitrogen from human sources, for instance, has led to the over-enrichment (eutrophication) of many coastal bays and waterways. 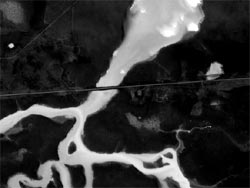 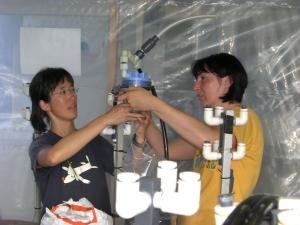 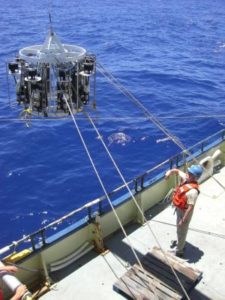