Uranium-series isotopes have provided unique insight into geochemical rates and processes during genesis of basaltic magma from the earth's mantle. Specifically, recent measurements of the longer-lived isotopes of the U-decay series have placed important constraints on melting rates (related to solid mantle upwelling rates) and melt fractions. However, there have been relatively few measurements of the shorter-lived isotopes of the U decay series in basaltic samples. As a result, time-dependant parameters such as melt transport rates and magma storage times are not well known. To better constrain these parameters, under this SGER award, the PIs propose to measure short-lived 227Ac (t1/2 =21.8 y) in young basaltic samples from mid-ocean spreading centers and intraplate volcanoes like Hawaii. This geochronologic system has the potential to be an important chronometer for dating of young mid-ocean ridge basalts in the time range of 10-100 years. Development of a new counting technique for 227Ac has simplified its analysis making this research possible for the first time. 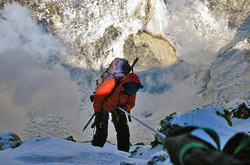 University of Hamburg researchers designed "tube" moorings that make way for icebergs, then bounce back up, affording protection for instruments taking measurements near the surface

We would like to extend our thanks to The National Science Foundation for their generous support of this project.
K. Sims co-principal Investigator.