The goal of GEOTRACES is to identify processes and quantify fluxes that control the distribution of trace elements and isotopes (TEIs) in the ocean, and to establish the sensitivity of these distributions to changing environmental conditions (http://www.geotraces.org/). In collaboration with Ken Buesseler (WHOI) and Billy Moore (USC) we are quantifying a suite of uranium/thorium series radionuclides on the first US GEOTRACES cruise in the North Atlantic that are well suited to study the sources and sinks of TEIs on time and space scales that are required to interpret lateral and vertical TEI distributions in this basin. Our measurements include the radium “quartet” (224Ra, 223Ra, 228Ra and 226Ra), used to quantify horizontal and vertical transport of dissolved TEIs, as well as the shorter lived thorium isotopes, 234Th and 228Th, used to quantify particle scavenging, vertical fluxes and remineralization rates of bioactive and/or particle reactive TEIs.

A wide range of processes will be encountered along the proposed GEOTRACES N. Atlantic leg, and the short-lived U-Th series isotopes will play a key role in the interpretation of observed TEI distributions. The utility of these tracers can be used to address two main key processes: boundary inputs of TEIs and TEI particle cycling including scavenging, vertical export and remineralization. Within boundary inputs, we intend to quantify TEI fluxes to the Atlantic Basin due to submarine groundwater discharge, cross-shelf mixing both surface and subsurface at the shelf break, and diffusion and vertical transport across the thermocline and benthic boundary layer (228Ra). In terms of particle cycling, we can determine rate constants for transfer of reactive TEIs between dissolved and particulate phases, vertical export on sinking particles (upper ocean and benthic nepheloid layer), and remineralization of particle-bound TEIs in the ocean “twilight zone”.

The North Atlantic Zonal Transect Cruise (GA03) began on the r/v Knorr from Lisbon, Portugal, October 15, 2010. Due to mechanical issues on the ship, the cruise was terminated in Cape Verde after 1/3 of the scheduled time. The transit was resumed in reverse the following year leaving from Woods Hole, Massachusetts on November 6, 2011 and ending December 11th, 2011 in Cape Verde. 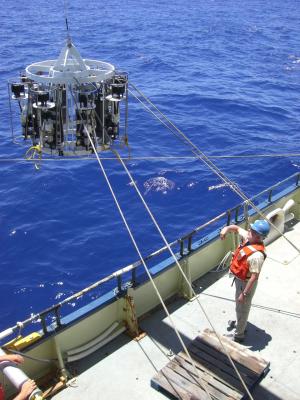 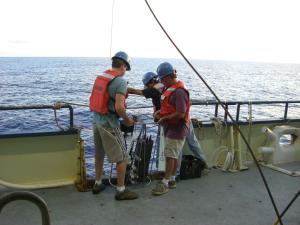 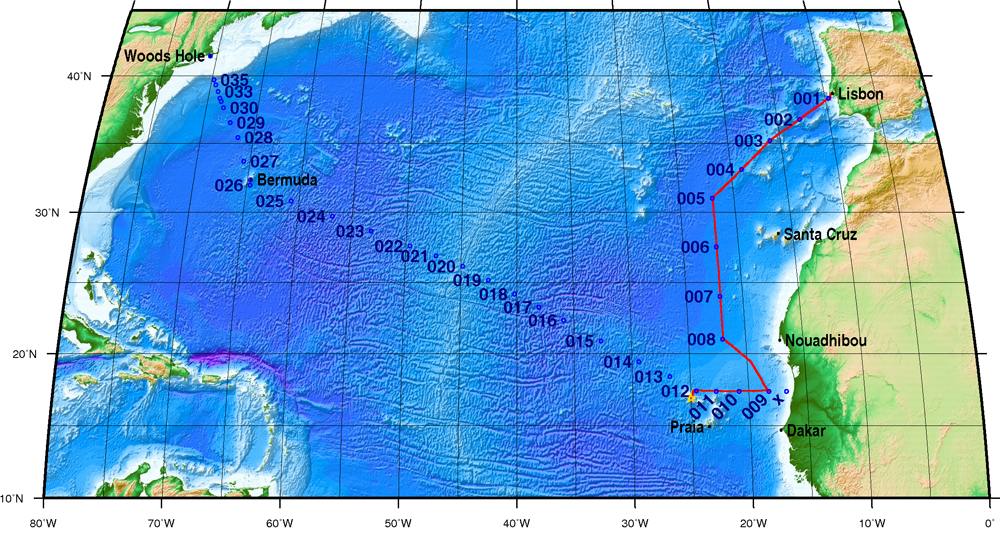