Overview: The deep and abyssal (> 4000 m) oceans both store and redistribute heat, freshwater, carbon, and other substances, and play a crucial role in regulating the Earth’s climate on multidecadal to millennial timescales. Repeated hydrographic observations from the last three decades have revealed compelling evidence of changes in these deep oceanic layers. In the Southern Hemisphere, abyssal warming is widespread, except in the Crozet, Madagascar and Mascarene basins in the southwestern Indian Ocean where anomalous cooling exists. At least half of the northward inflow of southern-origin abyssal waters in the whole Indian Ocean (IO) is through these basins (in the IO, no deep or bottom water is formed in the North). Could the cooling be an alias due to sampling bias since few observations exist? In 2018, after 23 years, the US GO-SHIP program occupied for a second time the I07N line in the western IO. The section started about 270 km north of the Atlantis II fracture zone, a main gateway for the abyssal water into the Deep Madagascar Basin (DMB). A comparison between the new and previous observations revealed an unexpected and massive (10 to 40 times) increase in chlorofluorocarbons (CFCs) below 3500m. The CFC increase implies that the DMB abyssal water has been replenished between 1995 and 2018, and may indicate changes in the strength of deep Indian Ocean Meridional Overturning Circulation (IMOC). A back-of–the-envelope calculation using the CFC and SF6 (Sulfur hexafluoride) partial pressure ratio indicates that part of the DMB abyssal waters may have been in contact with the atmosphere as recently as the mid-1990s. Where did these CFC-rich abyssal waters come from, and by which pathways have they spread in the DMB?

Intellectual Merit: The proposed research will investigate the largely unknown DMB abyssal circulation, how abyssal temperature varies in the DMB interior and the effects of the tortuous seafloor topography in steering the DMB abyssal flows. The primary objective is to find out by which pathway(s) the CFC-rich abyssal water that enters through deep fracture zones in the Southwest Indian Ridge (SWIR) spreads in the basin, which is crucial for a better understanding of the IMOC and its variability. Two existing, and conflicting, hypotheses guide the proposed work. One hypothesis is that a continuous, narrow, well-defined, and permanent Deep Western Boundary Current transports this water. A second hypothesis is that a northwestward interior flow between 30ºS-23ºS also exists, and contributes to the spreading of younger abyssal waters across the DMB. To determine the pathways and the transformation of the abyssal waters in the DMB interior an array of 75 neutrally buoyant RAFOS floats and 3 deep SOLO Argo floats will be deployed, complemented by hydrographic sections (including tracer analysis) across the mid-basin and the fracture zones. The in-situ observations will be paired with a state-of-art modeling component, which will be used to investigate the underlying dynamics and time evolution of the deep flow field. The proposed research will be a US contribution to the 2nd International Indian Ocean Expedition (IIOE-2) and will provide the first direct estimate of the abyssal circulation and temperature variability in the DMB on a basin-scale. It will also give the first quasi-synoptic volume transport estimates of the three most significant fracture zones in the SWIR, which are vital to quantifying the IMOC strength.

The observational program consists of: (a) 75 Lagrangian RAFOS floats, which will map out the flow and temperature fields at one pressure level; (b) a high spatial resolution CTD survey, to provide full-water column snapshot of ocean properties; (c) Three Deep SOLO Argo floats. The observational program will be implemented using a single 24-day cruise stationed out of Port Louis, Mauritius.

Map of the DMB field program, along with trajectories of all virtual floats at 4100 m deployed inside the fractures zones that reached the DWBC. Red is used for floats that were initialized at the Atlantis II, blue for Novara and Green for Melville. ETOPO-2 bathymetry is shaded every 1000-m. The A-, N-, M-sections will have five CTDs each; the X-section will consist of 24 CTD stations and RAFOS float deployment will be performed along this section. In the western end of the X- section, the CTD stations will be more closely spaced.  The white boxes indicate the fracture zone exits where RAFOS floats and deep SOLO Argo floats will be deployed.

This project is generously funded by the National Science Foundation.

Field work postponed due to pandemic until 2023. Cruise timing is TBD. 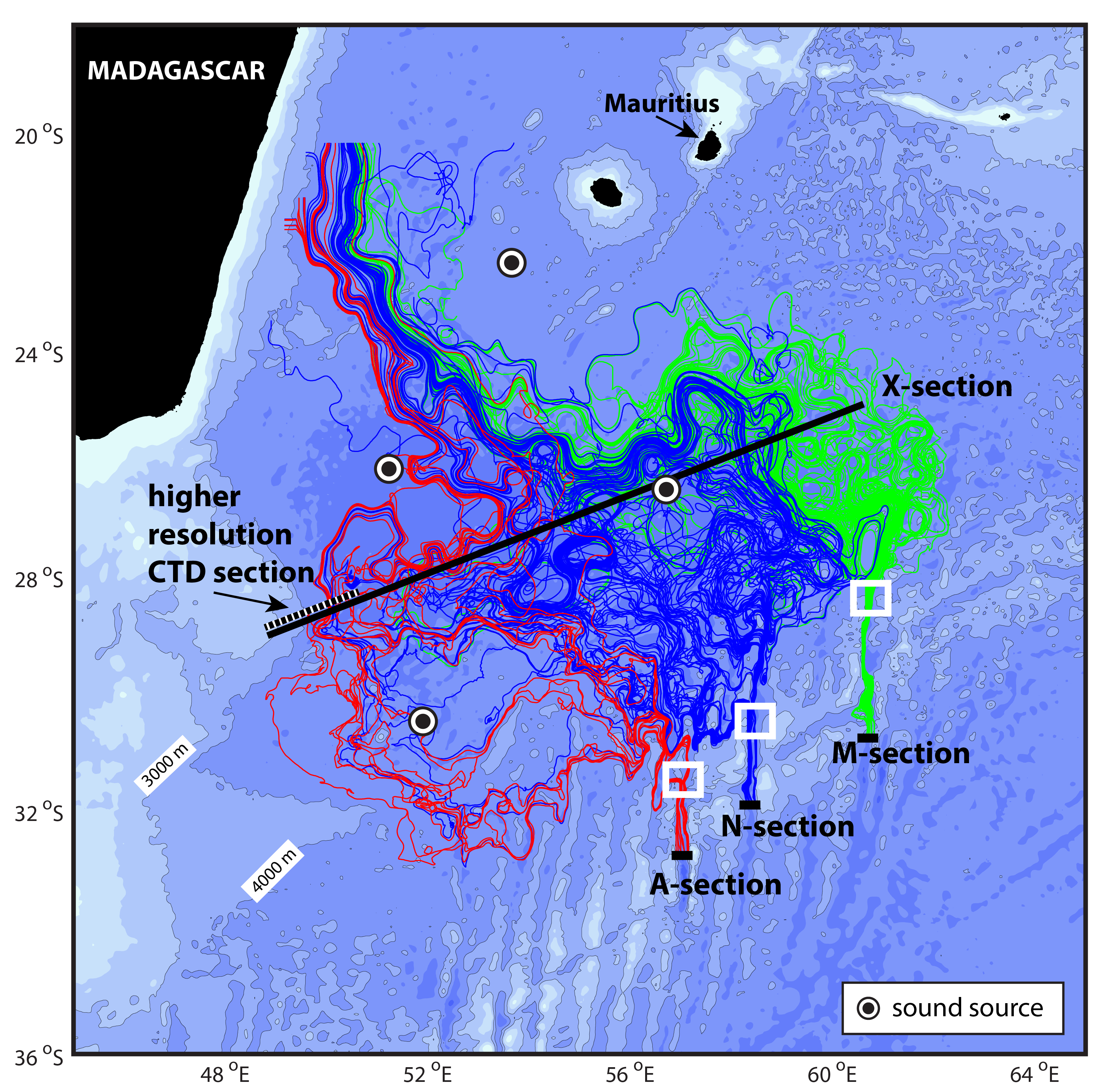 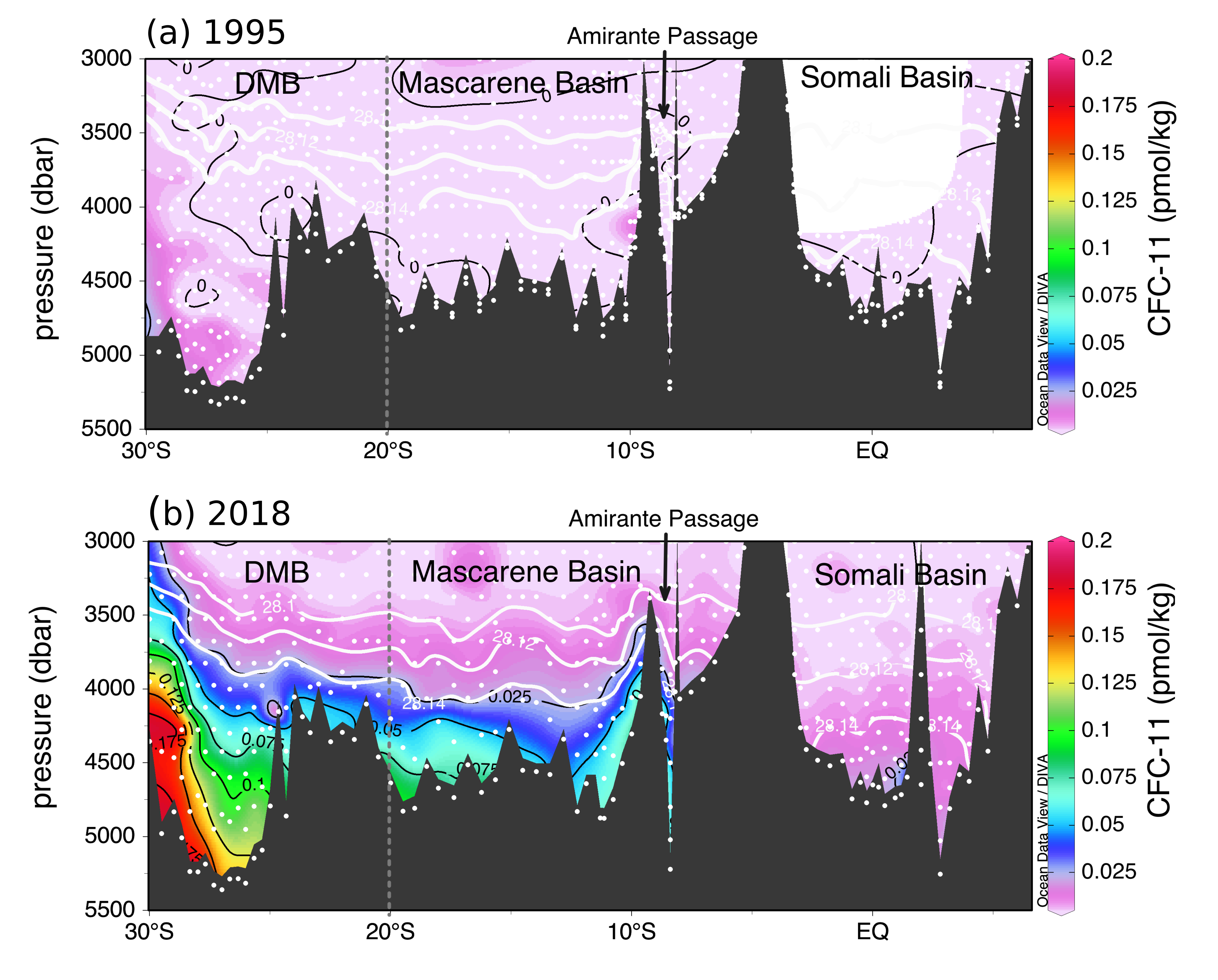 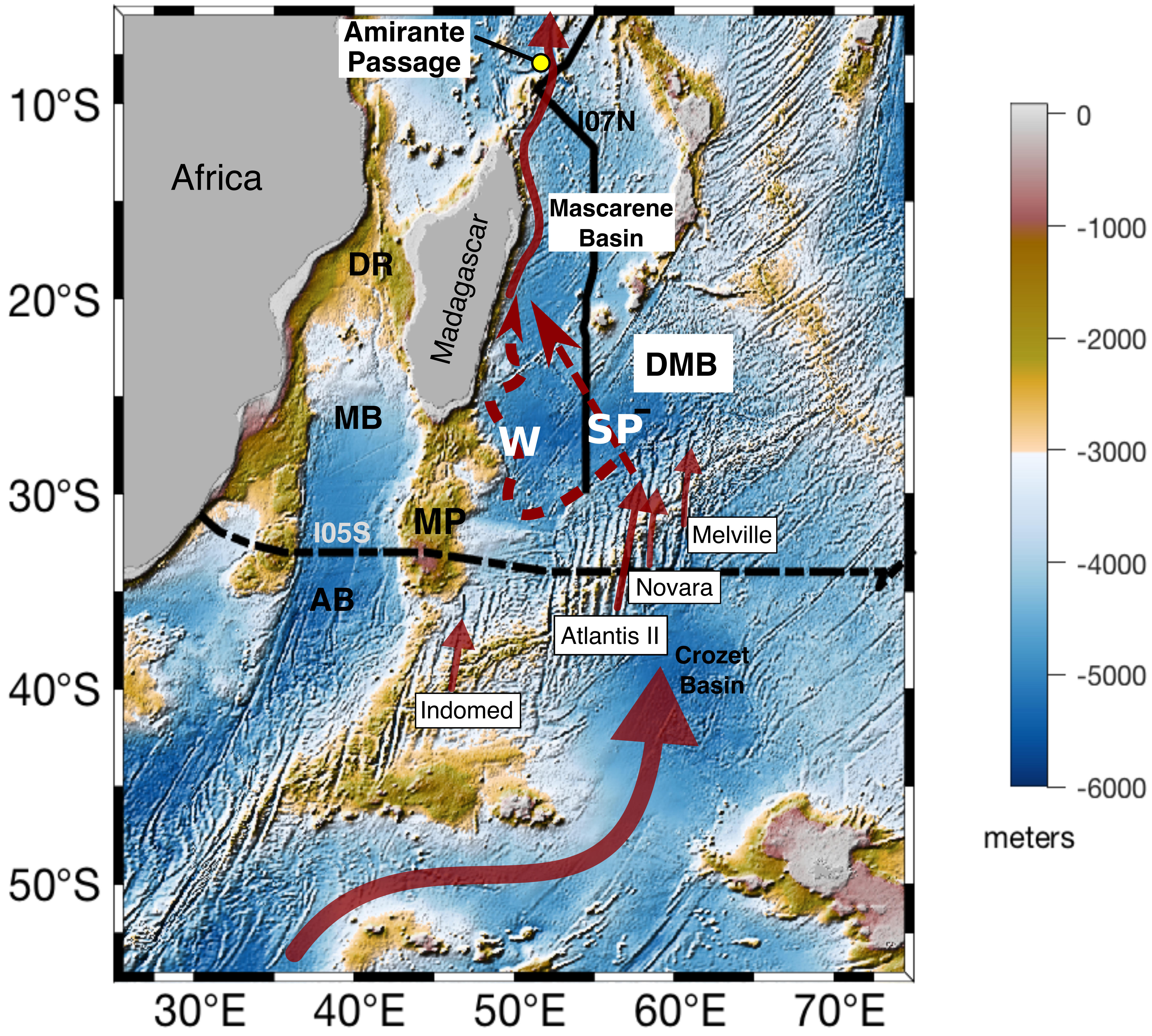