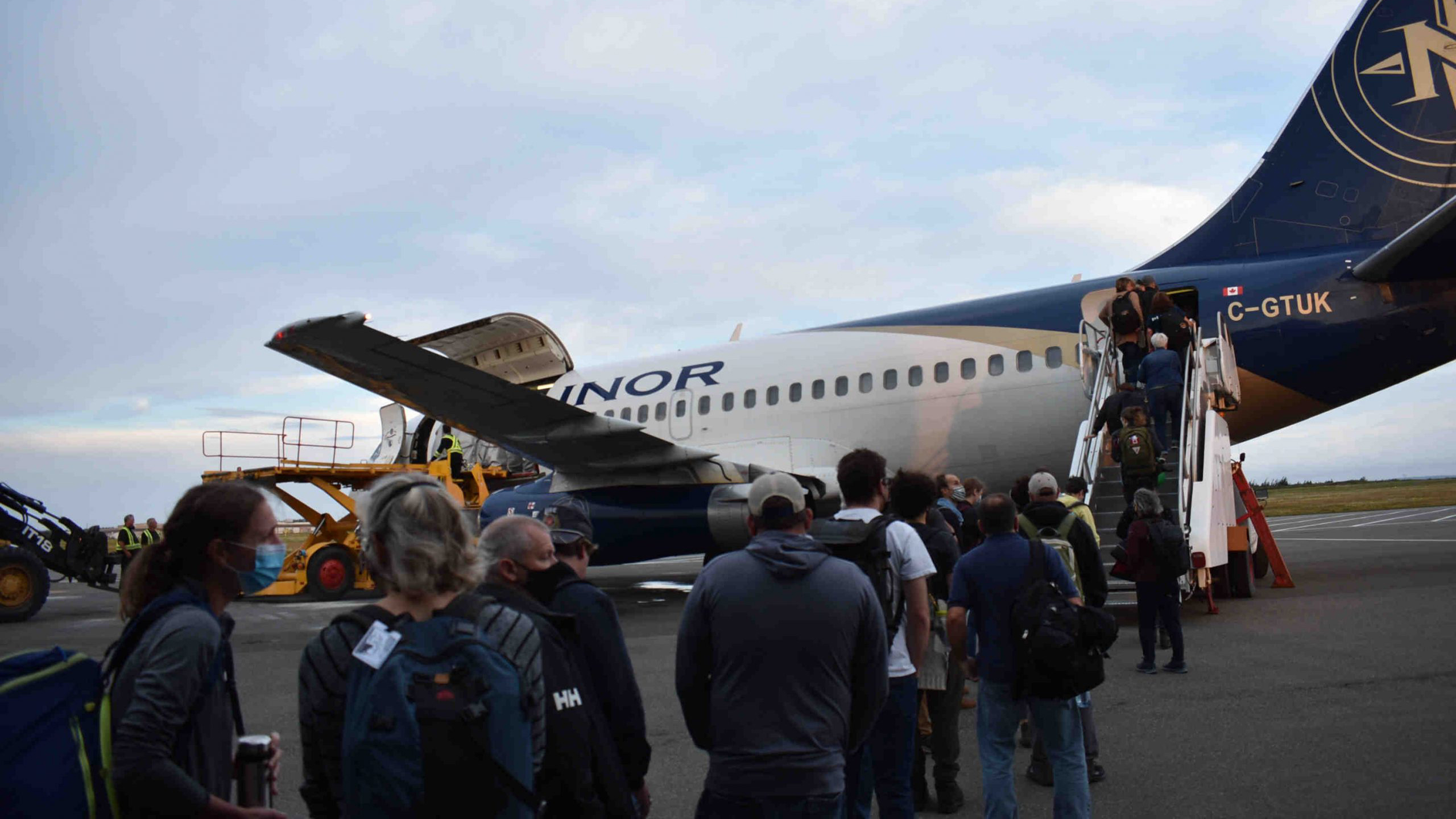 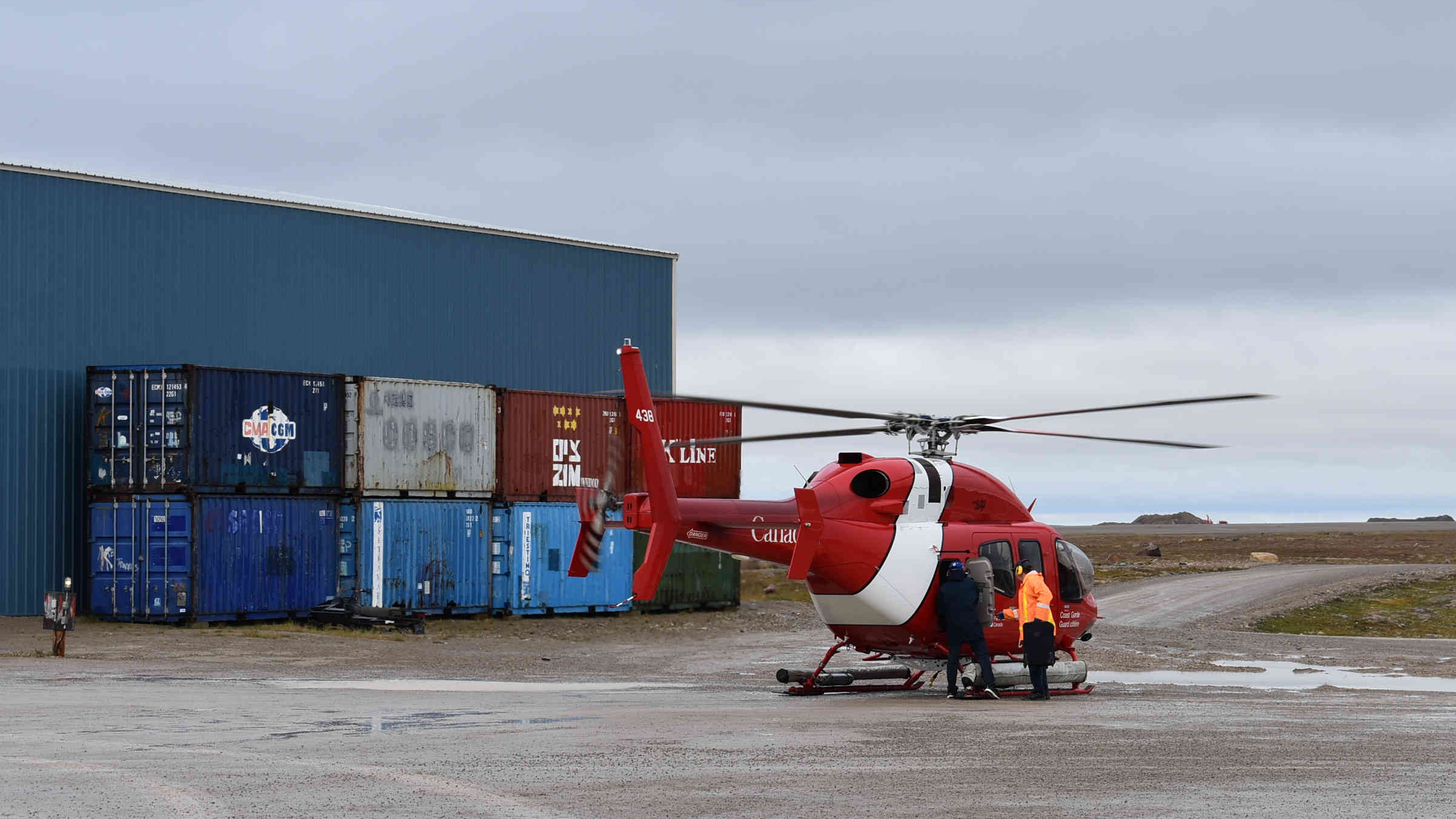 The LSSL helicopter ferrying us aboard from Cambridge Bay. (Photo: Isabela Le Bras) 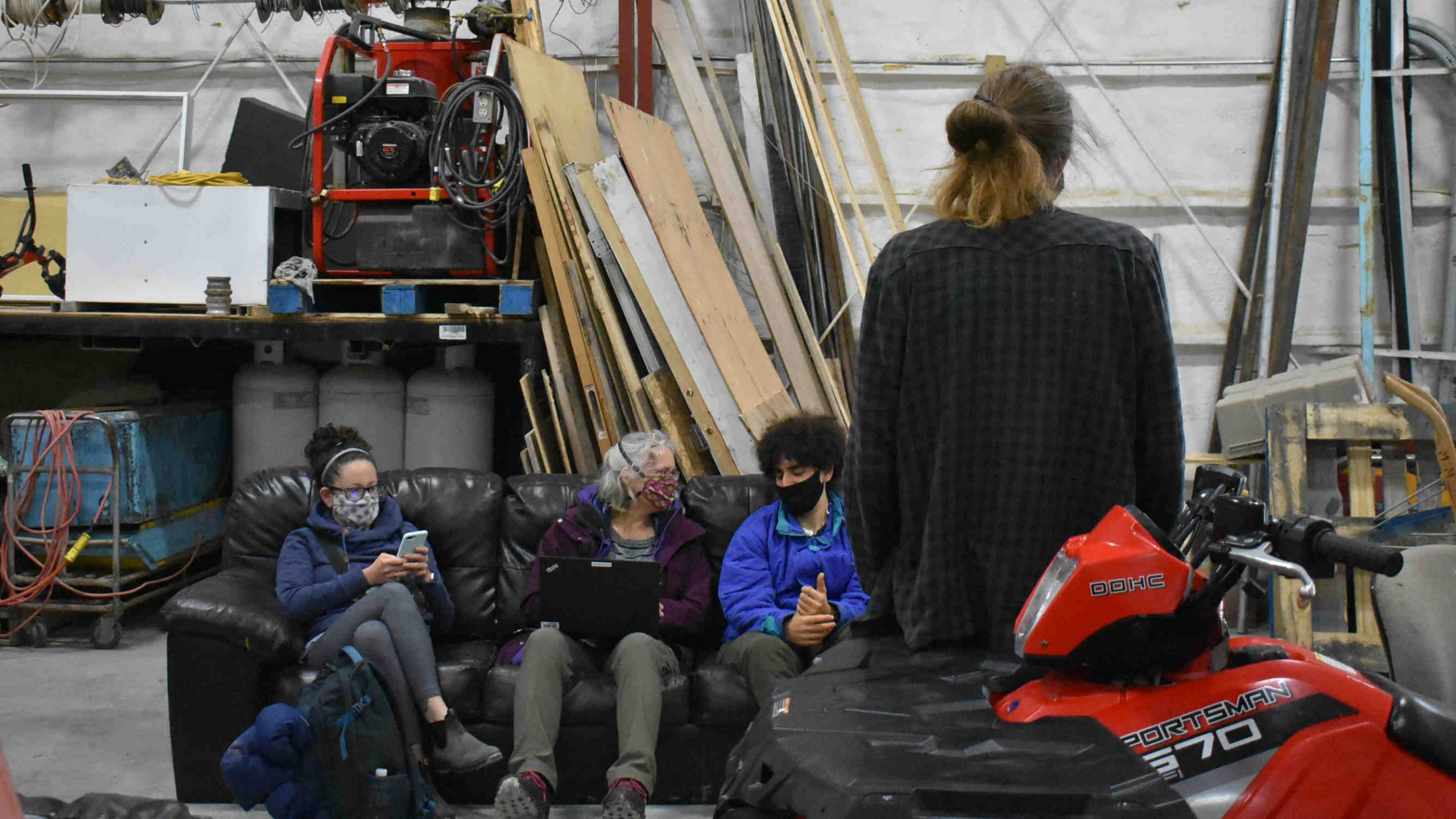 Waiting in a hangar for the helicopter ride to the LSSL. Pictured are Sarah Anne, Chief Scientist Sarah Zimmerman, Nimrod, and Colin (from the back). (Photo: Isabela Le Bras) 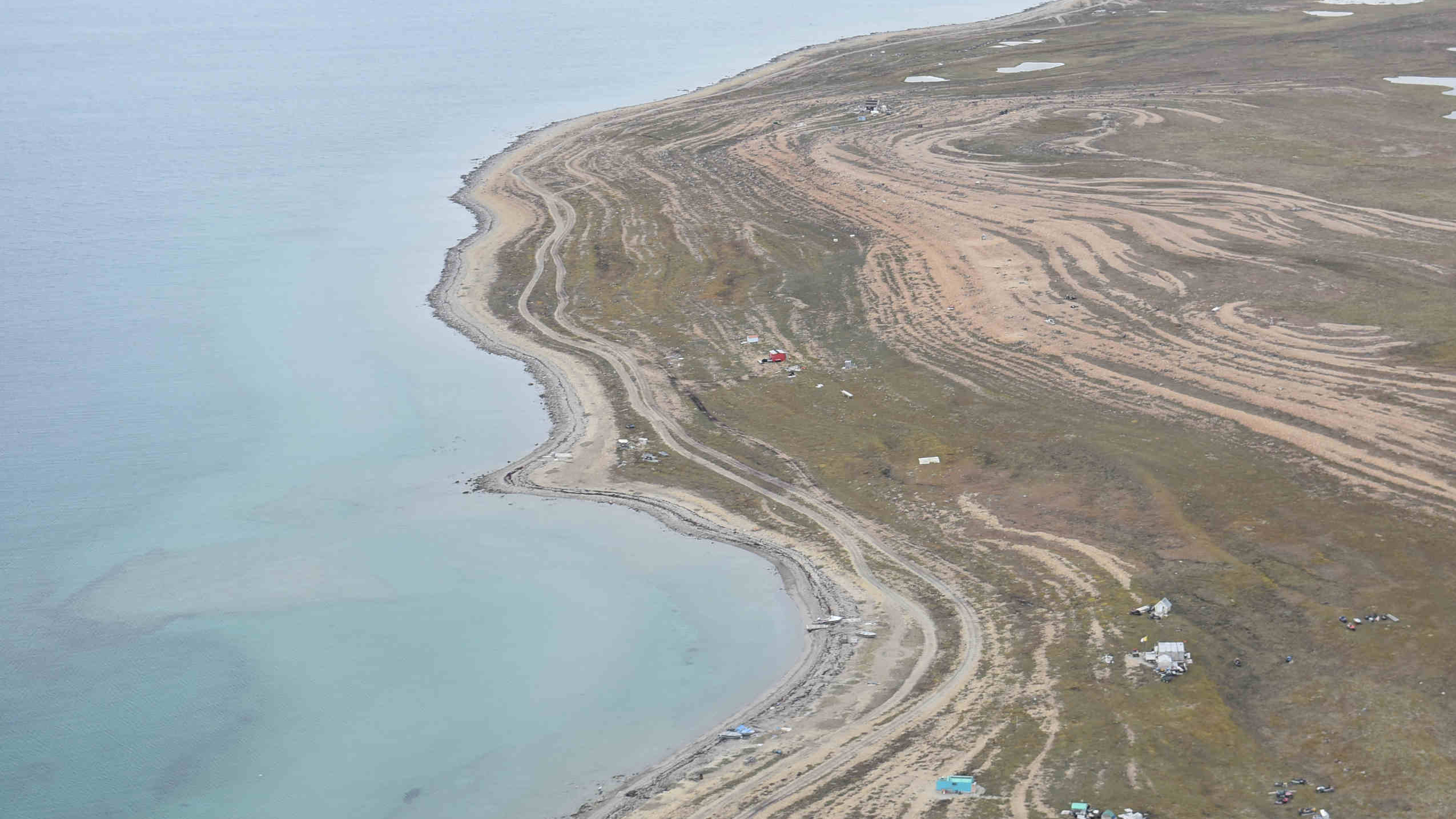 The view of the Arctic coastline from the helicopter. (Photo: Isabela Le Bras) 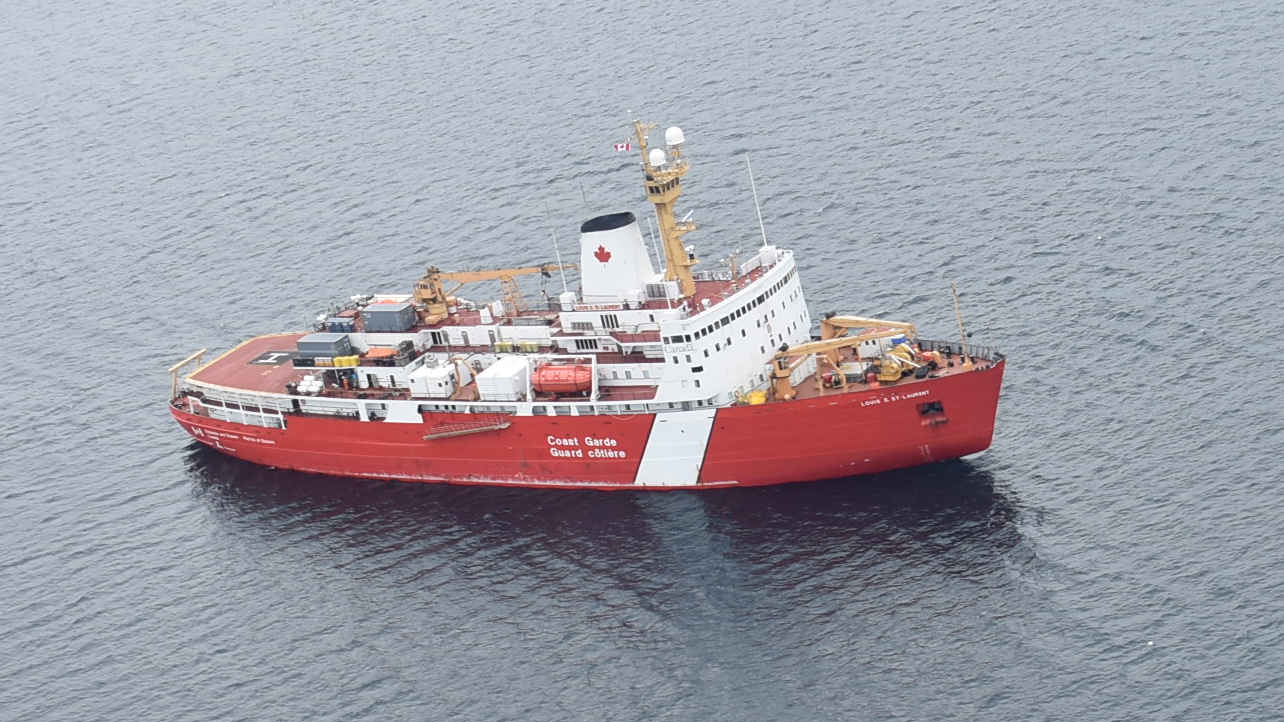 The LSSL, our home for the next month, seen from the helicopter. (Photo: Isabela Le Bras)

Dispatch 1: All aboard!
Greetings from the Canadian Coast Guard Ice Breaker Louis S. St.-Laurent, where the 19th expedition to Beaufort Gyre has begun! My name is Isabela Le Bras. I am a WHOI scientist new to the BGOS project, and I am thrilled to be participating in the BGOS-JOIS cruise for the first time. I will be joined in dispatch writing by Helen Gemmrich, a journalism masters student from the University of Concordia. Together we will report on the progress of the cruise in near-real time, as well as take deep-dives into the science and life taking place aboard the vessel.
Science and new crew were up very early yesterday, August 19th, in St. John’s Newfoundland, where we caught a 5am coast guard crew change flight from St. John’s to Cambridge Bay, with a refueling stop in between. In Cambridge Bay, about 70 of us we were ferried to the vessel in groups of five via helicopter (as you can imagine that it took quite a while!). Though we had all tested negative for COVID, we certainly did not want to inadvertently bring COVID to the local Arctic communities, so we were isolated in a large outdoor hangar while we waited for the helicopter. Onboard, we will continue to take COVID tests, wear masks, and social distance as much as possible while carrying out our research.
We were welcomed onboard by a “walk of life” tour of the vessel and safety orientation led by the Coast Guard Cadets. Unfortunately I didn’t get photos of everyone trying on the survival suits! We were underway by 1900 ship time (mountain time) when it was discovered that a critical piece of science equipment had broken (the distilled water maker). Luckily, the Canadian Coast Guard Vessel Sir Wilfrid Laurier was not too far away, so we turned back to Cambridge Bay in the middle of the night and arranged for the helicopter to pick up the system from them without any direct human contact. Once this operation was complete at around 1300, we headed back west, ready to do science!