The following is a synopsis of the history of geographic and scientific exploration of the Arctic. Our goal is to provide a brief but entertaining account about how our present knowledge of the Arctic Ocean has been acquired throughout the ages.

In the interests of brevity, we include most of the major oceanographic expeditions of the ice-covered central basins, but many other important expeditions are excluded, such as land-based ethnological, biological, and geological studies. In particular, modern scientific investigations of the Sea of Okhotsk, Bering Sea, Hudson Bay, Labrador Sea, and Greenland-Iceland-Norwegian Seas are not included. A considerable amount of effort has been made to ensure that information presented in this history is objective and accurate, but the compilers of this document are not historians, so readers are referred to the references for more thorough descriptions.

Credits:
Graphics (photographs, maps, pictures, slides) and text material related to the history of Arctic exploration by Russia, Former Soviet Union and Russian Federation were prepared by the Ecoshelf company, St. Petersburg, Russia. Text related to the North American and European exploration of the Arctic was written by Rick Krishfield. Images are credited according to their source. 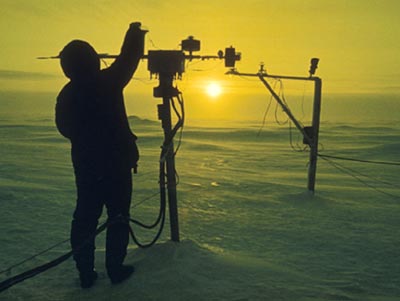