To avoid the obstacle of the ice pack, a Swedish engineer named Salomon Andrée attempted to use an unpowered helium-filled silk balloon to reach the Pole from Spitsbergen in 1896 and 1897. Unfavorable winds cancelled the attempt in 1896, but the following year Andrée, along with Nils Strindberg and Knut Frankel, managed to take off. Three days later, fog and icing caused the balloon to founder about 350 miles from Danes Island. The three men managed to reach White Island, but it was not until over thirty years later that their remains were discovered.

An Italian nobleman, Luigi Amedeo di Savoia, Duke of the Abruzzi, led another attempt from the northeasternmost extremity of Franz Josef Land, Rudolf Island in 1899. Luigi's fingers were so badly frostbitten during winter that he was unable to make a run at the Pole the following spring. Instead, Umberto Cagni took a sledge party 20 miles further north than Nansen's record, but three men perished on the return.

With the ulterior motive of traversing the Northwest Passage, Norwegian explorer Roald Amundsen organized an expedition to measure the position of the North Magnetic Pole. He selected a small sloop, the Gjöa, for maneuverability, compared to the much larger British ships from previous expeditions. Departing in 1903, he and six others spent two years making measurements of the magnetic pole on the southeast corner of King William Island, in a harbor they christened Gjöahavn. Immediately, a band of Netsilik natives settled nearby, with whom Amundsen bartered and learned the Inuit way of life and methods of surviving the cold. Finally in August 1905, the Gjöa headed west, became the first ship to navigate the Northwest Passage, and demonstrated that there was no practical passage for larger ships of this time. When the Gjöa became frozen in for another winter by Hershel Island, Amundsen, impatient to broadcast his news to the world, made an overland trek to Eagle, Alaska. Returning the following year, Amundsen brought the Gjöa triumphantly into Nome, Alaska. It would be another 34 years before the passage was accomplished again.

On the web: Rine, L., The Life of Roald Amundsen 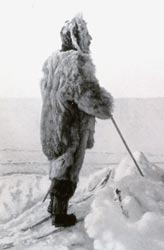