Having conquered the Northwest Passage and the South Pole, Norwegian explorer Roald Amundsen set his sights on the North Pole. He chose to adopt Fridtjof Nansen's idea of freezing a ship into the ice and floating to the Pole. However, the Fram was no longer seaworthy, so a new wooden vessel, the Maud, was constructed with an egg-shaped bottom to lift under ice pressure and avoid being crushed, similar to the Fram. Despite the start of World War I, the Maud departed Christiania (Oslo), Norway in July 1918, and set off through the Northeast Passage, along the coast of Siberia, with the intention of being frozen into the pack ice north of the Bering Strait. However, the pack ice formed much earlier that year, and by September the Maud and her ten passengers were frozen in for the winter north of Cape Chelyuskin. The crew included two of the four others who had reached the South Pole with Amundsen, the chief engineer and sailmaker from the Fram, and Harald Ulrik Sverdrup, a Norwegian oceanographer who would later become director of the Scripps Institution of Oceanography at La Jolla, California.

During the winter, Amundsen was without luck, as he broke his arm, was mauled by a bear, and suffered from carbon monoxide poisoning. Finally, in August the ice released its grip on the Maud and the expedition continued eastward, leaving two crew members behind who wished to return home. Though these members were experienced in polar travel, they were never seen again. Meanwhile, in September, the Maud was halted by ice again, and frozen in for a second winter 500 miles short of Bering Strait, near the mouth of the Kolyma River.

An encampment of Chukchi natives nearby provided intermittent company for the expedition members during the second winter. Little was known regarding the Chuckchis, so Amundsen, still feeling too week from the carbon monoxide poisoning to go himself, suggested to Sverdrup that he study the tribe. Sverdrup spent the next seven and a half months learning the Chukchi language, studying their customs, and even took a series of magnetic observations. Meanwhile, Amundsen sent a small party on an overland journey to send telegrams (and one troublesome crew member) to Norway, covering 1000 miles to Anadyr and back in 6 months.

The following summer, Amundsen decided to sail to Nome, Alaska to refit before continuing. They completed the Northeast Passage and arrived there in July 1920. Here, three more members left the expedition, leaving the Maud with only a crew of four. Regardless, after ten days, Amundsen headed north again, and became stopped in the ice in the Bering Strait, where the Maud spent a third winter. By July 1921, Maud was able to break out of the ice. However, damage to her propeller forced her to head south instead of north to be overhauled in Seattle, Washington. Amundsen went home to Norway, and returned briefly the following summer, but left the expedition in order to attempt to fly across the Arctic.

With Oscar Wisting in charge, the Maud headed north again, but did not find the drift current across the Arctic Ocean, and progressed no further north than the New Siberian Islands, returning to Nome in August 1925.

On the web: Rine, L., The Life of Roald Amundsen 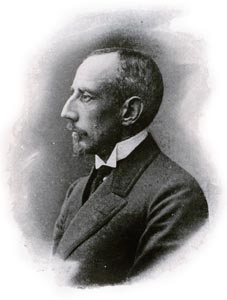 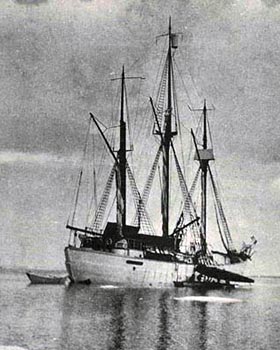 The Maud at sea.