With the goal of finding a continent north of the Canadian Archipelago, Vilhjalmur Stefansson organized the Canadian Arctic Expedition. Stefansson had already distinguished himself as an explorer and ethnologist by spending 18 months with the Inuit of the Mackenzie Delta, learning their language and customs during the Anglo-American expedition of 1906-1907. Furthermore, during an expedition from 1908 to 1912, he made notoriety by discovering a group of fair-haired natives on Victoria Island that he claimed might be offspring of Europeans, although critics ridiculed this idea.

For the expedition in 1913, Stefansson chose a retired wooden whaling ship, the Karluk, and assembled a group of international scientists, only two having prior polar experience. When the Karluk became locked in the ice north of Alaska after only three months into the voyage, Stefansson and a small group left the ship to hunt for food, but never returned to the vessel, which drifted away as the ice moved west. The Karluk was eventually crushed by the ice and the survivors made their way to Wrangel Island. Most of the party were rescued after the ship's captain, Robert Bartlett, journeyed with a dogsled and one Inuit to Siberia and Alaska for help. Of the twenty-eight people who departed on the expedition, eleven died in "the greatest Arctic disaster since the Franklin Expedition."

Meanwhile, Stefansson and his small group drifted on ice floes and explored Northern Canada. They discovered the world's last major landmasses and returned in 1918. While hailed as Canada's greatest Arctic explorer, Stefansson has also been severely criticized for abandoning the Karluk. In 1922, he organized (but did not participate in) an expedition to colonize Wrangel Island with four men and one Inuit woman, which also ended tragically in the deaths of all of the men. 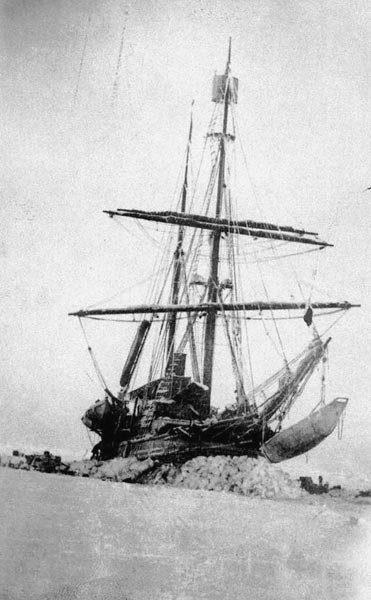 The Karluk just before she sank, showing, supended below the bowsprit, the umiak or walrus hunting boat mentioned by Hadley. (Image courtesy Dartmouth College)