The 1931 flight of the Graf Zeppelin is possibly the least well-known of several spectacular flights the giant rigid airship made in the late 1920s and early 30s. Despite its massive aerial survey and mapping of the Russian Arctic, the flight is perhaps best known now to collectors of the highly-prized Zeppelin mail it carried. Originally, plans called for a meeting at the North Pole between a submarine and the airship. But mechanical problems with the submarine prevented the rendezvous from taking place and the Graf Zeppelin continued the less well-publicized scientific pursuits of the flight. If for no other reason, the flight should be remembered as a tribute to Count Zeppelin who in 1910 envisioned the use of airships in polar exploration. 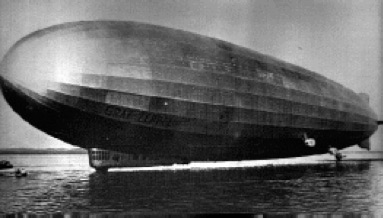 The Graf Zeppelin practicing a water landing on the Bodensee (Lake Constance) in preparation for the 1931 polar flight.