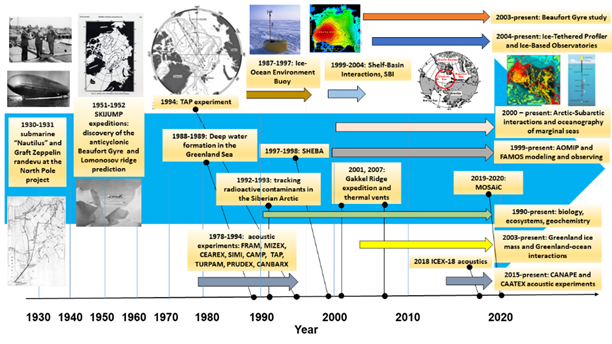 Evolution of WHOI Arctic research. The figure gives examples of historical and ongoing WHOI exploration, science, instrumentation and observational activities. Historical time (x-axis) is displayed nonlinearly, with time (and activity) advancing from left to right. Horizontal arrows of different colors indicate period and duration of expeditions or projects. Most of these activities are discussed in the text of paper (see reference below or click here).

In 2020, the Woods Hole Oceanographic Institution (WHOI) celebrates 90 years of research, education, and exploration of the World Ocean. Since inception this has included Arctic studies. In fact, WHOI’s first technical report is on the oceanographic data obtained during the submarine “Nautilus” polar expedition in 1931. In 1951 and 1952, WHOI scientists supervised the collection of hydrographic data during the U.S. Navy SkiJump I & II expeditions utilizing ski-equipped aircraft landings in the Beaufort Sea, and inferred the Beaufort Gyre circulation cell and existence of a mid-Arctic ridge. Later classified studies, particularly concerning under-ice acoustics, were conducted by WHOI personnel from Navy and Air Force ice camps. With the advent of simple satellite communications and positioning, WHOI oceanographers began to deploy buoys on sea ice to obtain surface atmosphere, ice, and upper ocean time series data in the central Arctic beginning in 1987. Observations from these first systems were limited technologically to discrete depths and constrained by power considerations, satellite throughput, as well as high costs. As technologies improved, WHOI developed the drifting Ice-Tethered Profiler (ITP) to obtain vertically continuous upper ocean data several times per day in the ice-covered basins and telemeter the data back in near real time to the lab. Since the 1980s, WHOI scientists have also been involved in geological, biological, ecological and geochemical studies of Arctic waters, typically from expeditions utilizing icebreaking vessels, or air supported drifting platforms. Since the 2000s, WHOI has maintained oceanographic moorings on the Beaufort Shelf and in the deep Canada Basin, the latter an element of the Beaufort Gyre Observing System (BGOS). BGOS maintains oceanographic moorings via icebreaker, and conducts annual hydrographic and geochemical surveys each summer to document the Beaufort Gyre freshwater reservoir that has changed significantly since earlier investigations from the 1950s–1980s. With the experience and results demonstrated over the past decades for furthering Arctic research, WHOI scientists are well positioned to continue to explore and study the polar oceans in the decades ahead.