The use of aviation for ice studies in the USSR began in 1924 with flights by Chukhnovsky over the Kara Sea. In 1927 the first landings on pack ice in the White Sea took place, and more or less regular ice reconnaissance began in the 1930s, when navigation along the Northern Sea Route became active. In June 1937, Valery Chkalov departed from an airfield near Moscow on a transarctic flight lasting 63 hours and 25 minutes. On this epic flight Chkalov crossed the White Sea, Kola Peninsula, Frantz Josef Land, North Pole and Central Arctic, landing on an airfield near Portland, Oregon. A month later, a second even longer flight along this route was carried out by Gromov. However, it wasn't until the successful drift of the first "North Pole" station that the capabilities of aircraft in Arctic research were fully appreciated. Airplanes could be used not only to deploy cargo and ice camps, but also for short-term landings on the ice and temporary field camps. Thus it became possible to study different parts of the Arctic Ocean in one season, allowing a much more comprehensive picture of the governing processes.

In spring 1941 an expedition called "North" carried out three flights from Wrangel Island to investigate one of the northeastern regions of the Arctic Basin. At each landing site bottom sounding, hydrographic, meteorological and geophysical measurements were carried out. The success of the expedition established a new method of field work. However, World War II immediately interrupted the study and not until 1948 was "North" resumed. Beginning in the 1950s, Soviet aircraft monitored the ice cover in the Arctic every year through 1993 and contributed to supplying other expeditions. The aircraft were also instrumental in erecting a series of polar stations on the coast and islands and discovering and mapping many new islands, capes, and bays. Bottom topography was studied, and the Lomonosov, Mendeleev, Gakkel ridges, Nansen, Makarov deeps were identified. Ice measurements were made, over 5500 oceanographic stations were acquired from drifting ice, and tens of thousands of water samples were collected for chemical analysis. 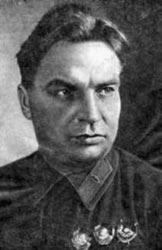 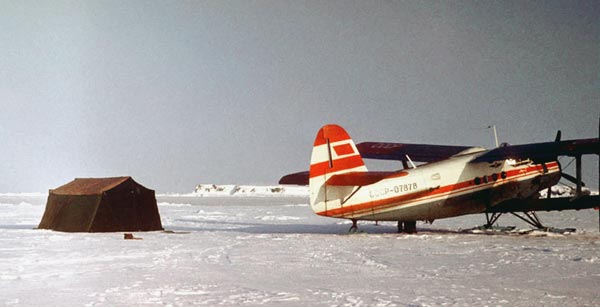 Preparation for measurements at the hydrographic station. (Image courtesy Ecoshelf)