Wreckage from the Jeannette was found by Inuit on the southwest coast of Greenland in 1884, three years and 2900 nautical miles from where it sank. This information suggested to a young Norwegian scientist and explorer, Fridtjof Nansen, that just as the debris of the Jeannette had been transported across the Arctic Ocean by the ice, so too could a vessel if it was properly constructed to withstand the pressure of the ice. Funded by Norwegians, a specially constructed vessel, the Fram, was constructed with a rounded bottom to lift the ship under ice pressure. Nansen departed Bergen, Norway with the Fram in 1893, headed eastward along the Northeast Passage, and turned into the ice pack north of the Lena River in eastern Russia. For three years, the ship was carried by the ice across the Arctic, but never exceeded 86°N latitude, so Nansen and Frederick Johansen set out to the Pole on skis, with kayaks, sleds, and provisions. Ridges of ice blocked their progress northward, so they only just surpassed 86°N before being forced to turn back and head for Franz Josef Land, about 400 miles to the south. They survived the winter season on Franz Josef Land living in a stone hut, killing bears and walrus for food, clothing, and burning blubber for fuel. The following June, Nansen and Johansen reached Cape Flora, an English base where they were returned to civilization. The Fram, which was left in the charge of Otto Sverdrup, arrived in Tromso, Norway on August 20, 1896, and Nansen and Johansen were reunited with the crew the next day.

Although Nansen did not achieve the North Pole, the Fram expedition finally put an end to the "Open Polar Sea" theory, and made numerous scientific observations, providing the first oceanographic data from the central Arctic. Nansen confirmed the existence of the Transpolar Drift and discovered that the Polar Basin was deep. Furthermore, he noticed that ice drifts were not parallel to the wind direction, but were consistently offset to the right, and suggested that it was due to the rotation of the Earth (Coriolis force). In order to explain this observation, another Norwegian, V.W. Ekman would develop a mathematical theory to describe wind driven surface currents. The Fram was later used to explore the Canadian Arctic in 1898-1902 by Sverdrup, and was used by Roald Amundsen on his trip to claim the South Pole in 1910-1912. It is now the centerpiece of the Fram Museum in Oslo.

On the web: Fram Museum 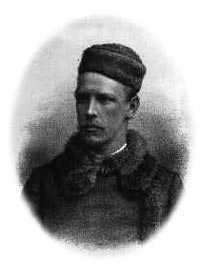 Fridtjof Nansen wearing a jacket with a fur collar, and a skull cap. The picture is based on a photo by L. Szacinski. (Image courtesy Norwegian Library) 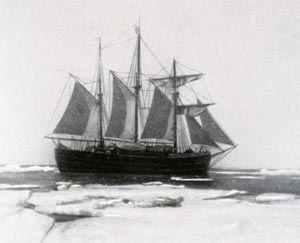