By the 1920s, all of the major geographic objectives of polar explorers had been achieved. However, this did not dissuade adventurers from attempting to attain the Poles by other means. The new technology of aviation seemed promising, and Norwegian Roald Amundsen, who had already sailed the Northwest & Northeast Passages and trekked to the South Pole, wanted to be the first to fly over the North Pole. His first attempt was an expedition out of Spitsbergen in May 1925, financed by American millionaire Lincoln Ellsworth, with six men utilizing two Dornier-Wals flying boats. The two aircraft used up half their fuel flying for eight hours up to 87°44'N, where the landed in a slushly lead. One of the aircraft was damaged, the lead that the other plane landed on became blocked with ice, and the party spent the next three weeks preparing a runway on a large ice floe for takeoff. In the remaining good airplane, all six passengers safely returned.

The following year, Amundsen and Ellsworth would try again, but this time there was competition from American aviator, Richard Evelyn Byrd. Coincidently, both groups chose Kongsfjorden in northwest Spitsbergen as their starting point in May 1926. Byrd took off for the Pole first in a three-engine Fokker monoplane with skis piloted by Floyd Bennett. In a fifteen and a half hour flight, Byrd claimed to have reached the North Pole, circled it in the air, and returned, despite oil leaking from one of the engines. However, based on a later study of the meteorological conditions and technical records, it has been contended that Byrd could not have possibly reached the Pole in the time of the flight, and likely never exceeded 89°N latitude. Nevertheless, Byrd was celebrated for his accomplishment, and increased public interest in aviation.

Meanwhile, Amundsen and Ellsworth, along with the Italian airship engineer Umberto Nobile and a crew of 13 others, arrived in Kongsfjorden with an Italian semirigid airship that was renamed Norge for the expedition. Two days after Byrd's flight, the airship departed Spitsbergen, arrived at the North Pole nearly 17 hours later, dropped flags from Norway, the US, and Italy at the site, and continued across the most inaccessible region of Arctic Ocean to land in the village of Teller, Alaska after a 72-hour flight. The success of this voyage captivated Italy and convinced Nobile that airships could play an important part in Arctic exploration, which would unfortunately lead to his Arctic disaster.

In May 1928, Nobile arrived again in Kongsfjorden with his new airship, the Italia, and a crew of fifteen. Several flights to explore Arctic waters north of Siberia were hindered by bad weather, so on the third flight, Nobile headed toward Greenland, and then explored the region northward to the Pole. After dropping Italian flags and a wooden cross on the Pole, the Italia headed back to Spitsbergen, but ran into strong headwinds and fog, which caused the airship to crash onto the ice. Nine survivors, including Nobile, landed on the ice 60 miles north of Northeast Land with some provisions and a radio. One man died in the crash, and the remainder of the crew were carried away with the airship by the wind - never to be seen again. Two weeks later Nobile's radio distress calls were picked up, and a massive rescue operation ensued, including 18 ships, 22 airplanes, and 1500 men from six countries. Three weeks after that, a small aircraft with room for only one passenger rescued Nobile. Finally, in July, the remaining seven survivors were rescued. Nobile was criticized by the Italian dictator Mussolini afterwards for being the first rescued, even though the others wanted him to go to lead the rescue.

A further tragedy related to the mishap of the Italia was the disappearance of Amundsen and four others while searching for the Nobile survivors by airplane. 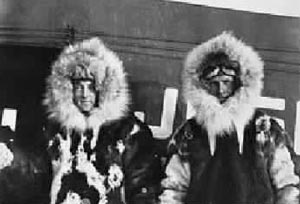 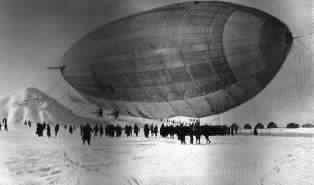 The airship Italia at Kings Bay, Spitsbergen, 1928. This photo provides a perspective as to the size of the airship. The Italia was designed and flown by Umberto Nobile who led the 1928 North Pole expedition that culminated in the Italia crash. north of the Svalbard archipelago. (Image courtesy Polarflight website)