Before he died, Czar Peter the Great sent a Dane named Vitus Bering to search for a route to America from Kamchatka. Bering reached Cape Dezhnev in 1728, established that a passage existed, and turned back on being alarmed by the cruelty of the local Chukchi tribes. In 1732, the Russian Admiralty ordered investigations of Siberia and a route to America and Japan, consisting of three parties: a marine expedition to the North Pacific, a land expedition to East Siberia, and a sea expedition to map and describe the northern coast of Siberia, later called the Great Northern Expeditions. Empress Anna put Bering in charge of the five Great Northern Expeditions, which lasted from 1733 to 1742.

During the expeditions, thousands of kilometers of the coast from the White Sea to Anadyr were mapped for the first time, numerous bays, gulfs, capes and islands were discovered, and extensive geographical material was collected. Many geographical features are named after the Naval officers who led the explorations, such as Cape Cheluskin, Malygin Strait, Cape Ovtsyn, Cape Skuratov, and Cape Steligov. For instance, young naval officers and brothers, Khariton and Dmitry Laptev separately explored the coasts east and west of the Lena River, in what is now called the Laptev Sea. In 1732, the western coast of Bering Strait was documented and mapped for the first time, while the American coast was explored by Bering and Chirikov in 1741.

he eminent Russian physicist and philospher, Mikhail Lomonosov, participated in the Great Northern Expeditions for 20 years. He organized specialized polar explorations, supplying each vessel with physical and astronomical instruments, teaching navigators to make physical measurements, and developing specialized ship logs and meteorological log books. In 1763, he wrote a remarkable description of explorations in the northern seas from the time of the Russian Pomors to the expeditions, and included a discussion of Arctic oceanography. He suggested a scheme of currents in the Arctic Ocean, described ice drift mechanics, classified sea ice types, and considered the dependence of the freezing point of seawater on salinity. He explained the role of the sun as a source of heat in the Arctic, postulated that heat exchange from the sea to the air through the ice cover moderated Arctic climate, and also gave the first scientifically-based theory of the aurora (northern lights). On the Arctic map attached to the book, Lomonosov portrayed ocean around the North Pole, contrary to generally accepted opinion.

Inspired by Lomonosov's theories, Vasily Chichagov led an expedition to navigate across the Arctic Ocean to Bering Strait from Spitsbergen in May 1765, but the way was blocked with heavy ice. Meanwhile, Fedor Rozmyslov was sent to look for a Northeast Passage via Novaya Zemlya. At the end of summer 1768, Rozmyslov reached Matochkin Shar after a difficult voyage and entered the Kara Sea but could not proceed because of a problem with the ship. After wintering on Novaya Zemlya, and unsuccessful attempts to repair the ship, the survivors returned to Arkhangelsk in a merchant boat. Meanwhile, other remarkable Russian explorers were wintering over on Spitsbergen and on the southern island of the Novaya Zemlya archipelago, which was also being circumnavigated for the first time. Farther east, Nikita Shalaurov sailed from the Lena River hoping to discover new islands and the full passage to the Pacific Ocean, but ended up mapping the Arctic coast from Lena estuary to Shelagsky Cape. In 1785, an attempt to sail through the Northern Sea Route was made from Kolyma to the east by Iosif Billings and Gavriil Sychev, lasting 8 years.

Also in the 1760s, the Alaskan coast of North America was being visited by the Russian explorers Krenitsin and Levashev, but it wasn't until the 1780s that the first Russian settlements on the American continent were founded. In 1784 a merchant adventurer, Grigory Shelikhov, established a village on Kadyak Island and wrote a book proposing permanent Russian settlements in North America. In 1798-99, Shelikhov's successor Alexander Baranov founded a town called New Arkhangelsk on Sitkha Island (presently Baranov Island), which became the capital of Russian America. By the first quarter of 19th century, there were 12 large Russian settlements in different corners of Alaska, which were administered by the Russian-American Company until Alaska was sold to the US in 1867.

After the Napoleonic Wars, the Russian Admiralty renewed interest in describing the many "white spots" on the maps of the polar regions. Consequently, in 1819 two expeditions were sent to either ends of the globe. During the next 4 years, the Far Northern expedition made a number of discoveries in the North Pacific, described the coast of the North America, passed through Bering Strait, and went farther northward than all previous expeditions. Meanwhile, Feodor Litke thoroughly mapped the west coast of Novaya Zemlya in 1821-1824 and carried out geographical and hydrographical investigations. In another expedition between 1821 and 1824, Feodor Wrangel and F. Matyushkin described hundreds of miles of Siberian coast, and discovered Bear and Wrangel Islands. Based on his own experience, Wrangel suggested that the North Pole could be reached using sledges over the Arctic sea ice. P. Pakhtusov voyaged twice to Novaya Zemlya between 1832 and 1835, wintered on the island, obtained detailed meteorological observations, and described southern and eastern parts of the archipelago. About the same time Russian Naval officers produced the first realistic map of the New-Siberian Islands and Siberian coast from Olenek to Indigirka River. 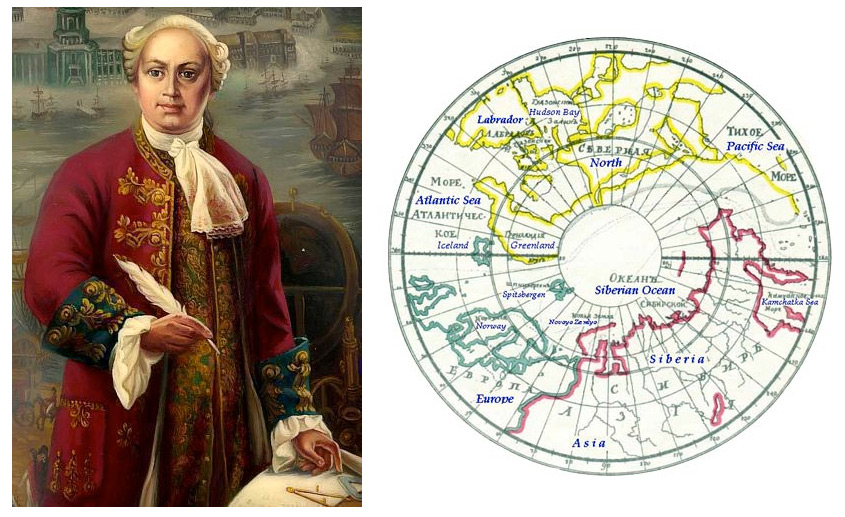 Portrait of M. Lomonosov and his map of the Arctic. (Image courtesy Ecoshelf) 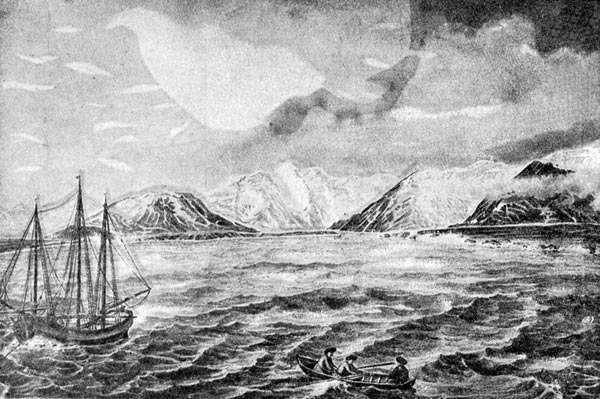 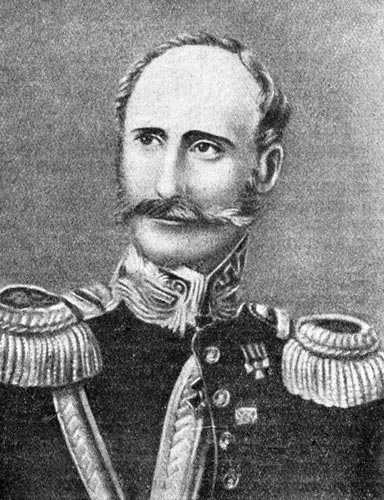