With the advent of the Cold War, the US military began to look at the northern regions as the front line of defense against the USSR. During the war, the Allies had established weather stations in Greenland and Canada, but now the US wanted an air base that could be used to intercept bomber attacks from northeast approaches to America, and as a refueling point for long range bombers potentially directed at the Soviet Union. Midway between Moscow and New York, Thule, Greenland was selected as the site. The Thule region had been inhabited by native Greenlanders for centuries, had served as base for Robert Peary's North Pole expeditions, and was a trading station and base for five scientific expeditions by Danish explorer Knud Rasmussen between 1912 and 1924, besides being an Allied weather station.

The Thule Air Base was constructed in total secrecy by the US military under the code name 'Blue Jay' in 1951. An armada of 120 shipments, 12,000 men, and 300,000 tons of cargo arrived in North Star Bay in July 1951, and construction immediately began. Living on board the ships and working around the clock, most of the airfield and base were built in only 60 days. Buildings were constructed with refrigerator-like Clements panels, and propped on pilings to prevent melting into the permafrost. During its peak, it housed approximately 10,000 personnel. Now, less than 1,000 men and women are stationed there.

Besides supporting military objectives, Thule Air Base has also been used as the staging point for scientific ventures, most notably, the construction of Camp Century, an entire city for 85-200 residents carved 200 feet into the ice, 150 miles from Thule. Camp Century was opened in 1959 and included a nuclear reactor for heat and power. Research included studies of the structural properties of snow, meteorological studies, and ice coring by the US Army Cold Regions Research and Engineering Laboratory (CRREL). The camp was closed in 1967.

In addition to the Thule Air Base, the 1950s saw the establishment of the Distant Early Warning (DEW) line of 63 radar and communication stations. Extending 3000 miles from Alaska to Baffin Island, roughly along the 69th parallel, the radar stations provided overlapping coverage for the detection of attack by bombers or missiles from the north. Construction began in December 1954 and work was completed in July 1957. Altogether 460,000 tons of material were moved by air, sea, and land to build the stations. In 1985, the US and Canada signed a treaty that began the upgrade and transition to the North Warning System (NWS), which is operational today. The official DEW line closing ceremony was held in 1993, and the abandoned DEW line facilities are now the focus of a massive cleanup effort by the Canadian government.

On the web: Harris, Lynden T., The DEW Line Chronicles

On the web: Thule Air Base by Michael Salling

On the web: Thule History 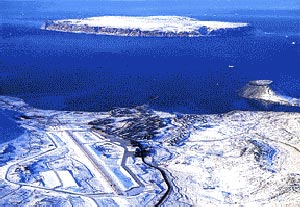 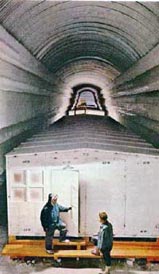