Between 1886 and 1909, the Peary Arctic Club, led by US Navy engineer Robert Peary, organized 8 expeditions to the Arctic. In 1891-1892 and 1893-95, he crossed the Greenland ice cap and learned Inuit survival techniques. He next sought to retrieve an ancient meteorite in 1896 and 1897. In 1898-1902 he made his first attempts to reach the North Pole, losing several toes to frostbite. This handicap would plague him for the rest of his career. In 1906 he made swift progress at first, but then open water and a gale forced him to turn back short of the Pole, at 87°06'N. Finally, by Peary's account, he reached the North Pole in April 1909 with his longstanding companion Matthew Henson and four natives. At the same time that Peary was revealing his claim, Dr. Frederick Cook also claimed to have sledged to the Pole. When it was discovered that Cook had lied about summiting the tallest mountain in North America, Denali (also known as Mt. McKinley), his credibility was irrevocably damaged. A Congressional vote declared Peary the victor. However, questions persist whether Peary exaggerated distances traveled in his final push for the Pole.

Cole, Diane, "Staking a Claim: Who was first to the top of the world? And why it may not matter", U.S. News and World Report, posted online August 6th, 2006. 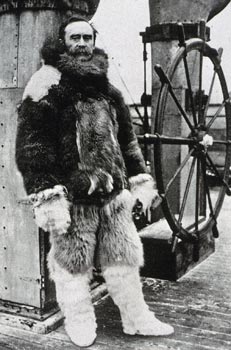