We are using the Polar Science Center Hydrographic Climatology (PHC) Atlas to initialize the 3-D hydrographic properties of each of the various AOMIP ocean domains. This is a global ocean hydrographic data set with a high-quality representation of the Arctic Ocean.

The PHC atlas will be utilized to initialize the AOMIP models by interpolating the winter-season (i.e., March, April, May) PHC data to each of the model domains. This winter-season salinity and temperature data are available by clicking on the link to the right.

Another use of the PHC atlas is the surface-restoring of salinity.

The Arctic Ocean database for hydrography and circulation has been, until recently, sparse in temporal and spatial coverage. Currently, however, this database has expanded considerably. First, historical hydrographic data have been declassified and released by both Russian and western sources to produce smoothed, three-dimensional grided fields for summer and winter (EWG, 1997, 1998). Secondly, there has been an explosion of cruise data over the past decade. There has been at least one major expedition into the deep Arctic Ocean nearly every year during this period, either by icebreaker or submarine. There have also been data collected by satellites, staffed ice camps and by drifting and bottom-moored buoys, and by tide-gauge stations (Proshutinsky et al., 2001). While Arctic Ocean models have made some use of these data to perform a preliminary validation of models, there has not been until AOMIP an organized, comprehensive validation effort.

A convenient hydrographic data set for Arctic Ocean modeling is the Polar Hydrographic Climatology (PHC) produced by the Polar Science Center (PSC) at the University of Washington. This data set is a merger of two data sets: (i) the World Ocean Atlas (WOA98) produced by the Ocean Climate Laboratory at the National Oceangraphic Data Center (NODC) and (ii) the Environmental Working Group Atlas (EWG) which is made available through the National Snow and Ice Data Center (NSIDC).

The PHC merged product has the same resolution as the original WOA98, namely a one degree horizontal grid spacing and 33 fixed vertical levels. The PHC data set contains annually-averaged, seasonal, and monthly data files. The annually-averaged and seasonal data span the full depth of the water column, i.e., from 0 m at the surface down to a maximum depth of 5500 m; the monthly data spans only the top 1000 m of the water column. The data are in WOA98 format (i.e., ASCII) with values over land grid points set as "missing".

The data has recently been reprocessed in two ways. First, it has been rewritten into IEEE Floating-Point Format so that it may be viewed with certain graphics packages, e.g., GrADS. Secondly, to make the data more readily useable in Arctic Ocean modeling studies, the missing land values have been 'filled' with an extrapolation of the ocean values. This extrapolation is performed by solving Laplace's equation for the missing values while specifying the ocean values as boundary conditions. This extrapolation is performed on a level-by-level basis, independent of the data on the levels above or below. This is the same procedure as presently used in the MOM model. Send email if you would like to access the reprocessed data.

To give an idea as to what this hydrography looks like, a few pictures of the annually-averaged data are shown, and then below the monthly varying surface data is shown. In all of the following, it is the reprocessed PHC data that has been interpolated onto a typical Arctic Ocean model grid. The 33 levels of the PHC have been retained in the vertical. The horizontal grid retains the one degree spacing for the PHC but the model grid is on a projection that has the model equator running east-to-west through the geographic North Pole.

Geopotential heights and their implied geostrophic currents have been been computed. An assumption of a level-of- no-motion at depth has been made. In fact, three such levels have been investigated, namely 100 m, 500 m and 1000 m. In calculating the geopotential height (i.e,. the vertical integral of the specific volume anomaly) a water column is disregraded if it is shallower than the assigned level-of-no motion. In the plots below, the color bar scale represents the dynamic height in cm and the overlaying vectors represent the geostrophic flow field (or thermal-wind if you prefer) in cm/s. The scale for the vector magnitude is shown separately on the lower right of each plot.

The 100 m reference depth calculation shows all the expected featrues: the anti-cyclonic Beaufort Gyre, the Transpolar Drift Stream, the southward flowing East Greenland Current, the cyclonic circulation of the Barents Sea, and the cyclonic gyres of the GIN Seas. The flow are rather weak, but then again this is the geopotential anomaly over just the top 100 m of the water column.

The 500 m reference depth calculation has some similarties to the 100 m one. It also highlights the important exchange in the Fram Strait region with the GIN Seas water being ported to the Eurasian Basin and vice versa. The absolute difference in geopotential heights between the waters of the Beuafort Gyre and those in the Greenland Gyre is about 70 cm. This height diffeerence is a signifincant 'driving force' in maintaining the structure of the Transpolar Drift Stream. At this reference depth of 500 m it is noteed that the relativley shallow Barents, Laptev, Kara, and East Siberian Seas are all excluded from the calculations. 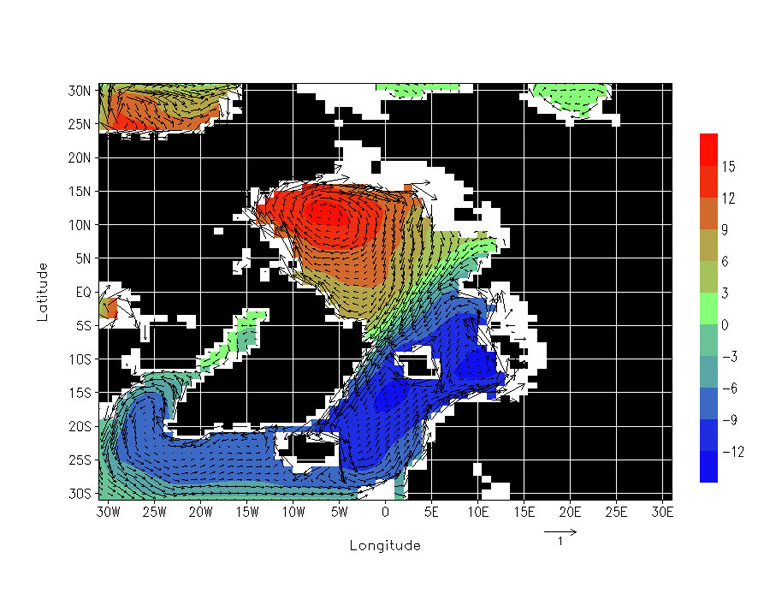 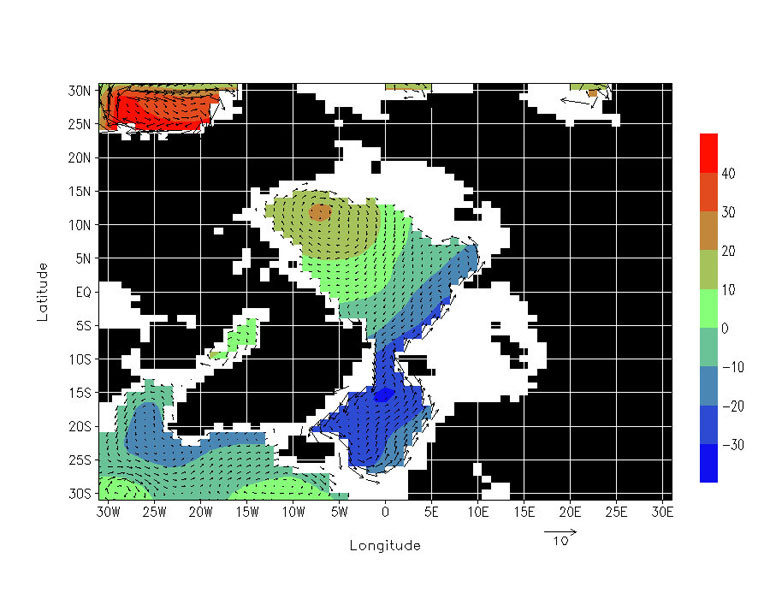 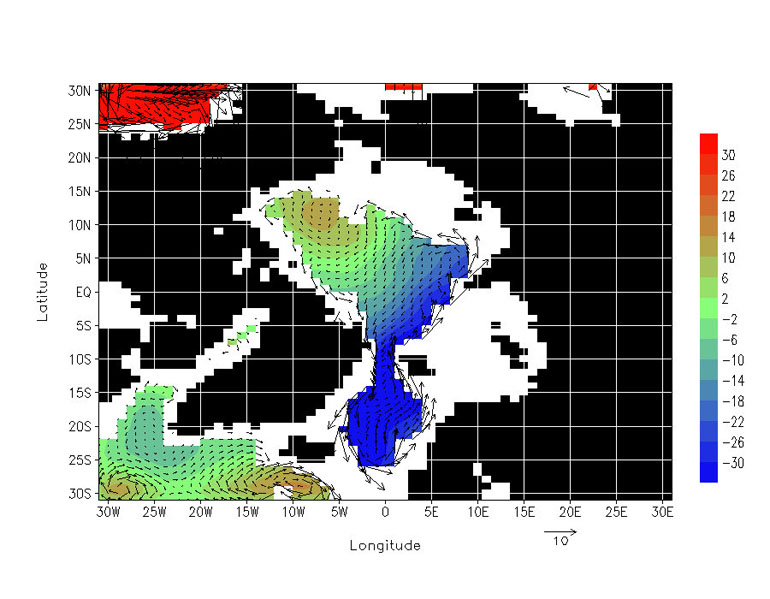