The Seventh AOMIP Workshop (June 14-15) being held at GFDL and is timed to precede the CLIVAR Workshop: Evaluating the Ocean Component of IPCC-Class Models (June 16-18).

Day 1 of the workshop will involve a comprehensive discussion of results from the Coordinated Analysis 1948-2004.

Day 2 will be dedicated to a discussion of various topics:

I. Model calibration and validation (led by Andrey Proshutinsky)

Summary:
There are a number of datasets with which we can compare our model output. Some of these will require re-running the models with new tracers, which we should consider for future runs. The Atlantic Water circulation question provides a good focus for our comparison studies and could also provide guidance for the NABOS/CABOS observational project also under the IARC umbrella. Bill, Elizabeth, Mike, Michael, Jia, Jinlun and Andrey volunteered to pre-process/provide some datasets.

Steve Griffies gave an overview of this week's CLIVAR workshop agenda, and emphasized that setting up OMIP forcing is the hardest task.

Frank Bryan described efforts of "Pilot OMIP" (POMIP) to asses feasibility of OMIP, using a "synthetic" annual cycle with monthly variability. 7 models participated using a variety of grids and ice models. Concluded that their protocol is feasible and there are robust behavior among the model results in spite of forcing problems. They have been unable to motivate model developers to do diagnostic subprojects. Frank questioned whether it's better to focus on mean climate or variability, whether the project should be open-ended or hypothesis driven, and how to approach project administration.

Bill: need to have a particular year with which to compare with real data
Andrey: AOMIP philosophy has been driven by need to get funding---deliverables are 1) improve models, 2) understand Arctic ocean climate variability. History began with seasonal analysis using different forcing data sets, but differences too big to publish. Moved to common forcing, but still have different ice models so ocean differences difficult to assess. Have revealed large gaps in understanding, for example the Atlantic Water circulation. Each group has a 'niche' variable to study.
Mike: very hard to get funding for climatological, idealized experiments; change is more interesting
David Holland: could specify sea ice, especially in Southern Ocean
Steve Griffies: need to turn off atmosphere to reduce complexity
Siobahn O'Farrell: surface restoring is a big issue
Frank Kauker: OMIP forcing is not good for Arctic
Bill: surface restoring interferes with ice model simulation. OMIP could provide Southern Ocean MIP for AOMIPers
Elizabeth: explained global forcing (merged with AOMIP), and that global THC dies without active atmosphere model. OMIP could use model output data that already exists at PCMDI from CMIP etc.

Summary:
Our models still have many differences even with the AOMIP specifications, leading to many differences in our runs. It's early yet to attempt to suggest improvements for Arctic models. Our comparison studies will point to sensitive modeling issues. Individual studies may suggest improvements for particular models but these may not be applicable to all models. More general suggestions for what to look out for (important variables, parameterizations, etc) would be most helpful.

Greg: AOMIP model specifications have been compiled; some differences by choice
Bill: different physics have given us an ensemble of runs
Mike: we could come up with model improvement recommendations by repackaging previous results
Keith: need to show model improvements across many models, not just one
David: running very simple 'toy' problems would lead to basic improvements
Bob Hallberg: rather than proposing particular model parameterization improvements, provide knowledge about sensitive areas or parameterizations for Arctic modeling in general
Greg: we will work individually toward our own model improvements

A. Publications - prepare individually or gather for submission all at once? special issue of journal or monograph?

Summary:
We should think about what publications are likely to arise from our AOMIP studies and provide a list to Andrey for possible compilation into a special issue of some journal yet to be determined. This might form the basis for a future monograph.

David: would like to study toy problem with each model; would like reference work listing every Arctic Ocean modeling study and results
Mike: Ocean Modelling magazine wants to publish a review paper
Wieslaw: need paper to use as basic reference for AOMIP
Michael: need to focus on major achievements/understanding provided by modeling rather than just model descriptions
Bill: supports monograph but not in the next year. Andrey guest-edit Prog in Oceanogr?
Andrey: no one reads monographs. J. Clim would be better
Mike: coordinate submission of papers planned for this year
Michael: provide outline of papers to potential journal editor
Bill: compilation of comparison data would lead to a paper
Michael: send title/abstract/idea to Andrey for compilation
Andrey: of themes on AOMIP web site, only one is published
Cornelia: request for freshwater diagnostics might result in publication but that depends on outcome of the study
Jia: wants to compare processes from several models
Mike: let's have a virtual workshop
Bill: paper deadlines March 1, 2005 and March 1, 2006

B. LAS - maintain or upgrade?

Summary:
The LAS is an important tool for AOMIP. It needs some improvement to make model output more easily comparable, either on-line or by providing easily downloadable datasets. Additional funding for a support person would be extremely helpful, especially if that person would also interpolate data. It's not clear whether that person needs scientific background. The LAS will also provide data access to people outside AOMIP. We need some control over this but overall it is good public relations.

Mike: need to be able to fix plotting scales
Michael: is possible now
David: primary purpose for LAS is quick-look and to download netcdf data
Andrey: not enough memory - must ftp
Mike: John Walsh indicates AOMIP may get more money, could fund support person at NYU. Need help interpolating data from native grids to AOMIP grid.
Michael: unnecessary to interpolate because LAS only good for quick-look
Mike: when data is available on LAS, advertise to ARCUS to get more users
David: LAS says "can't publish data until obtain written permission from author"
Mike: PHC requests name/address/email when someone downloads (mainly for bragging but NSF likes outreach)

Michael: he, Frank and Greg are going; please send posters to Bergen not Germany 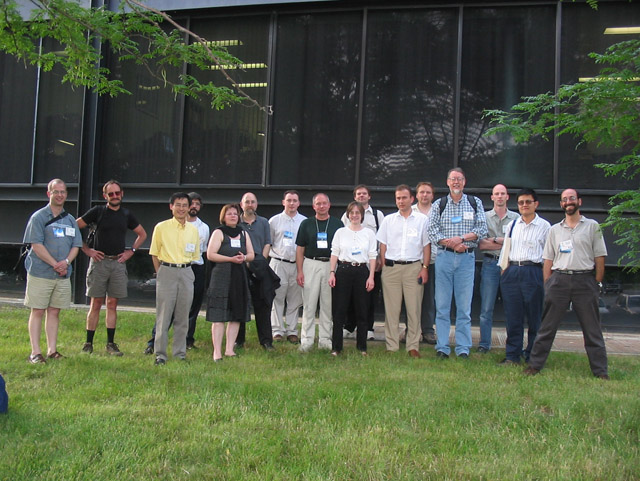 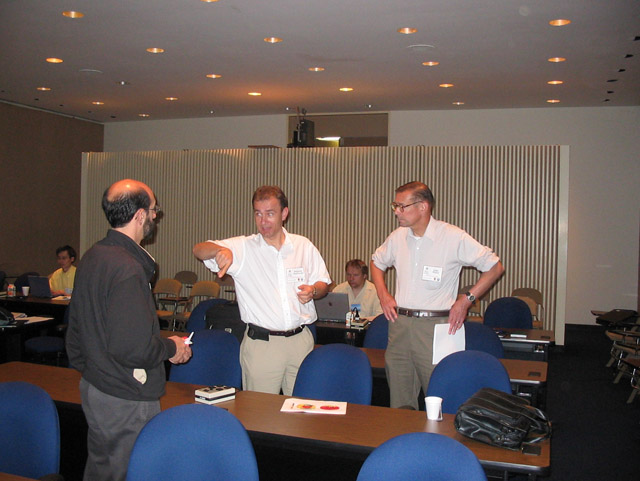