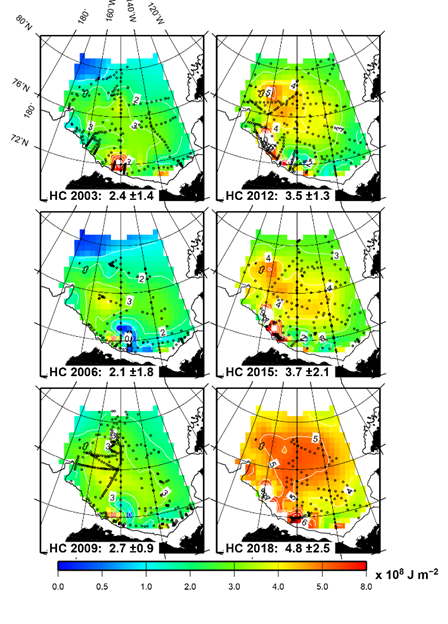 Figure 1 BGR heat content per unit area (x108 Jm-2) relative to freezing temperature integrated between isohalines S = 31 to 33 for the years noted. Black dots are locations of observations taken sometime from July-October in the year shown. Numbers on each panel indicate total heat content (x1020 J) in the region and rms error.

In the northern Chukchi Sea region, summer water temperatures are higher associated with warm Pacific inflows through Bering Strait and heating in summer by incoming solar radiation. Water here is pumped down from the surface (via Ekman transport convergence as a result of the prevailing anticyclonic wind stress gradients) and transported laterally by the BG geostrophic flow into the interior gyre (Timmermans et al., 2014, 2017). In this sense, warming in the northern Chukchi Sea region in recent years, which is largely attributable to increased solar absorption into the upper ocean there as a result of sea-ice retreat, is the source of heat accumulation in the BGR. This means the effects of an efficient local ice-albedo feedback are thus not confined to the surface ocean/sea ice heat budget but, in addition, lead to increased heat accumulation in the ocean interior that has consequences far beyond the summer season. Strong stratification and weak mechanical mixing in the BG halocline ensure that significant summertime heat remains in the halocline through the winter.

With continued sea-ice losses in the Chukchi Sea, additional heat may continue to be archived in the warm halocline. However, there is a limit to this: Once the source waters for the halocline become warm enough that their buoyancy is affected, ventilation can be shut off. For longer-duration solar warming (that is, longer-duration ice-free conditions in the region), sea-surface temperatures may become warm enough that they are too light to ventilate the BG halocline (see Timmermans and Jayne, 2016). Changes in FWC, Pacific inflows, and boundary current dynamics (e.g., Winsor and Chapman, 2002; Pickart et al., 2013) also intimately link to water mass pathways and heat transport. It remains to be seen how FW budgets and other processes, including continued sea ice losses, will change BG heat content. It is possible that in the coming years, excess BG halocline heat will give rise to enhanced upward heat fluxes, creating compound effects on the system by slowing winter sea ice growth.