In this BG project results essay (see more details in Proshutinsky et al., 2015) we provide some historical overview on the hypotheses explaining Arctic decadal climate variability and then describe some theoretical, empirical and model-based evidence that the BG freshwater reservoir is an important element of the Northern Hemisphere climate system.

One key element of decadal-change conceptual models is the freshwater flux from the Arctic Ocean to the North Atlantic, and another is the atmospheric heat flux from the North Atlantic to the Arctic (Figure 1). Compelling manifestations of the link between the Arctic and the North Atlantic are: (1) salinity anomalies that originated in the Arctic  and propagated in the subpolar gyre in the 1970s, 1980s, and 1990s as Great Salinity Anomalies, GSAs (Dickson et al., 1988; Belkin et al., 1998; Aagaard and Carmack, 1989); (2) atmospheric warming and cooling events that are related to the intensity of cyclone activity in the central and eastern Arctic (Serrese et al., 1997; Rigor et al., 2000)and coupled to the Arctic atmospheric circulation (Proshutinsky and Johnson, 1997; Thompson and Wallace, 1998).

To explain the observed decadal changes in Arctic climate, a conceptual hypothesis (Proshutinsky et al., 2002) was formulated. In this hypothesis, the freshwater and heat exchange between the Arctic Ocean and North Atlantic are self-regulated and their interactions are realized via decadal auto-oscillations. Based on this work an idealized multi-box model of the Arctic Ocean and North Atlantic Sub-polar Region (NASR) ocean–ice–atmosphere system was developed and employed (Dukhovskoy et al., 2004, 2006a, 2006b) to demonstrate how the system oscillates between an anticyclonic circulation regime (ACCR) and a cyclonic circulation regime (CCR).

A detailed description of the multi-box model is provided in Dukhovskoy et al., [2006a], while only a brief outline follows here. The prognostic model consists of two coupled modules: an Arctic Ocean and a NASR module, where each includes a coupled sea ice-ocean box model and an atmospheric model. The sea ice-ocean model consists of a thermodynamic ice model and a mixed layer-pycnocline model, with prognostic variables: water temperature and salinity, mixed layer depth, and sea-ice thickness. Ocean heat and salt fluxes are specified at the open boundaries of the two modules (Bering Strait, rivers, and North Atlantic), and fluxes between the modules are calculated from simulated temperature, salinity and the density gradient between the Arctic and NASR. The atmosphere in the Arctic model is treated via an energy balance, and surface air temperature in the NASR module is calculated as modeled temperature anomaly superimposed on a climatological daily value. The atmospheric heat flux between NASR and Arctic modules is taken to be proportional to the temperature difference between the two atmospheric modules. The full model is forced by daily solar radiation, wind stress, and river runoff. For validation purposes, results from model experiments reproducing seasonal and decadal variability of the major system parameters were analyzed and compared with observations and other models (Dukhovskoy et al., 2004, 2006a, 2006b).

It is obvious that such a multi-box model has several limitations: it does not include dynamics of the atmosphere, ice and ocean; the modeled system is closed, and there are no influences from the global ocean and atmosphere; and the model cannot show pathways of freshwater from the Arctic Ocean to the sub-polar convective gyres. Nevertheless, the advantage of the box model is its simple formulation that allows one to investigate the basic relationships between components of the studied climate system. This task is not straight-forward with coupled atmosphere-ice-ocean models, where extricating the role of internal mechanisms in climate shifts is complicated by too many other factors.

Anticyclonic regime: (see also Figure 2) During this regime, the NASR releases heat accumulated in the deep ocean layers to the atmosphere leading to a warmer-than-normal atmosphere and to the intensification of cyclogenesis. This atmospheric heat is transported to the Arctic with cyclones and contributes to a positive atmospheric vorticity (CCR) over the Arctic Ocean due to the substantial reduction in the Arctic sea level atmospheric pressure. This state lasts approximately 5-7 years (half period of oscillation).

Cyclonic regime: (see also Figure 2) During the second half of this oscillation (5-7 years), positive atmospheric vorticity (cyclonic winds) forces increased freshwater flux from the Arctic Ocean (from BG region) to the NASR and reduces NASR surface salinity. Consequently, strengthened upper-ocean stratification leads to reduced NASR convection, reduced heat flux from the ocean to the atmosphere and from the NASR toward the Arctic Ocean, and the Arctic circulation regime shifts to an ACCR. The ACCR is characterized by predominantly negative vorticity and colder than normal Arctic and NASR atmospheres.

Solutions obtained in the Arctic Ocean and NASR box model well reproduced the observed evolution of the major anomalies in the ocean temperature and salinity structure, sea ice volume, and freshwater fluxes during ACCR and CCR regimes prior to approximately 1997. However, after 1997, the real climate system does not behave according to the predictions of the conceptual models described above. After 1997, the AOO index is positive (Figure 2) and exhibits only weak interannual variability associated with the strength of the ACCR with no shift in annual mean conditions from an ACCR to CCR. Similarly, other conceptual models cited above do not have a mechanism to explain and predict the recent large-scale anticyclonic circulation observed in the Arctic.

Following our conceptual model, the prevailing ACCR should have switched to a CCR in the early 2000s. Instead, the Arctic has been characterized by an ACCR since 1997 at least until 2015, (Figure 2). Results of the Beaufort Gyre Observing System (Proshutinsky et al., 2009, 2011; Krishfield et al., 2014) indicate anomalously high freshwater accumulation (5000 km3 relative to reference salinity of 34.8) in the Beaufort Gyre since the start of the present ACCR in 1997. At the same time, the GIN Sea as part of the NASR shows a warming of the deep layers in the 2000s that has been attributed to a cessation of deep convection in the region (Somavilla et al., 2013) – conditions that typically develop during a CCR when freshwater is released from the Arctic Ocean. Following our conceptual model, one would expect enhanced deep convection and cyclone formation over the NASR (enabled by reduced freshwater fluxes from the Arctic) would have resulted in a regime shift from ACCR to CCR nearly a decade ago due to freshwater release from the Arctic Ocean. However, analyses of freshwater fluxes through Fram Strait (de Steur et al., 2009; Mauritzen et al., 2011) purport that the Fram Strait annual mean freshwater flux does not show any large variations since 2002.

We hypothesize that there is at least one additional factor, neglected in the multi-box model formalism, which has been influencing NASR conditions and has disrupted the auto-oscillatory decadal AOO index variability. The discussed Arctic Ocean – NASR system was viewed as a closed system (the black portions in Figure 2) but  in recent decades, anomalously warm atmospheric temperatures have led to increased Greenland melt, driving an important external forcing to the Arctic Ocean-NASR system (Figure 1, green part). Recent assessments of freshwater flux from Greenlandshow that during 1992-2010 this flux to the Arctic Ocean and NASR increased by 36% (Bamber et al., 2012). We speculate that the excess freshwater advected into the NASR may have significant impact to deep convection (with subsequent atmospheric cooling and reduction of cyclonic activity). The effect would be to impede the decadal oscillations that were a feature of the observations and well-represented by our idealized multi-box model (without a contribution to freshwater from Greenland) prior to the 2000s. Figure 1 (green part) schematically represents the influence of freshwater fluxes from Greenland on parameters in the Arctic – NASR system via reduction of NASR surface salinity, suppressing deep convection and maintaining a negative atmospheric vorticity (ACCR) over the Arctic.

The control run with no freshwater flux from Greenland produces quasi-decadal oscillations between ACCRs and CCRs (Figure 3a) that are similar to AOO variability (Figure 2) until 2002, while the additional freshwater flux resulted in significantly longer ACCRs  (Figure 3b), consistent with observations after 1997. A doubling of the volume flux of freshwater (Figure 3c) from Greenland to the NASR (not inconceivable in the future given present warming and Greenland melting trends (Frauenfeld et al., 2011; Kobashi et al., 2010) resulted in extreme changes in the system behavior with ACCRs dominating for more than 3 decades, separated by CCRs with 3-4 year duration. These idealized modeling results are consistent with our broad hypothesis that additional freshwater fluxes from Greenland melt may be sufficient to suppress the established Arctic decadal variability.

In the experiments described above, freshening of the upper NASR plays the key role in disrupting the auto-oscillatory behavior of the Arctic Ocean – NASR system. An additional freshwater flux from Greenland may impact water column stability and suppress convection in the NASR, reducing air-sea heat fluxes and leading to lower than normal atmospheric temperature in the NASR and Arctic Ocean. Freshening of the upper NASR also acts to maintain the small dynamic height difference between the Arctic Ocean and the NASR (and to reduce the potential for freshwater release from the Arctic Ocean to the NASR) and with the generally accepted view of convection processes in the NASR.

There have been several numerical studies, employing models having a range of complexities and resolutions, to investigate the role of freshwater flux increase from Greenland on the intensity of the Atlantic meridional overturning circulation(Driesschaert et al., 2013; Swingedouw et al., 2013; Marsh et al., 2010). Results show that depending on model resolution, applied forcing and duration of simulation, the influences of Greenland ice melt on the Atlantic meridional overturning circulation and on the Arctic and NASR conditions differ substantially. In general, however, results of these model studies indicate that freshwater release from Greenland weakens or interrupts decadal variability but mechanisms and processes responsible for decadal changes are not discussed.

Based on the analysis presented here we speculate that:

One important uncertainty in our analysis is that available time series observations are not sufficiently long to verify the hypothesized causality of the Arctic climate variability and Greenland melt (which itself varies on multi-decadal timescales (Frauenfeld et al., 2011; Kobashi et al., 2010).  Nevertheless, the data together with idealized modeling and physical context provides compelling evidence that input of fresh Greenland melt to the surface high-latitude regions can interrupt decadal variability of the Arctic – NASR system. While most predictions of future Arctic climate under global warming are done by extending observed trends in environmental variables, the effects of global warming are likely not to be monotonic due to complex feedbacks and relationships between Arctic environmental parameters, as has been discussed here. We speculate that under the new scenario presented here it is plausible that continued Greenland melt supporting longer duration ACCRs could result in Arctic cooling accompanied by increased ice extent and thickness, similar to conditions observed in the 1970s. This is because enhanced upper ocean stratification in the NASR will continue to inhibit heat exchange between the ocean and atmosphere and subsequently – transport of heat by cyclones to the Arctic. This could have broad-reaching climate implications under global warming as it limits the advection of heat from the mid-latitudes and is therefore a negative feedback on Arctic amplification. 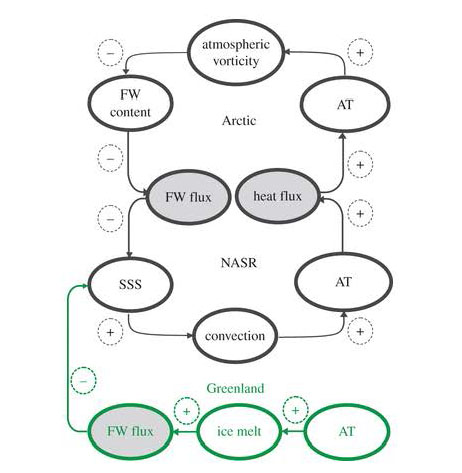 Figure 1. Arctic–NASR idealized atmosphere–ice–ocean climate system with feedbacks regulating decadal variability. A plus sign denotes mechanisms with positive feedback between two cells (i.e. an increase/decrease in one cell causes an increase/decrease in the second), a minus sign denotes mechanisms with negative feedback (i.e. an increase/decrease in one cell causes a decrease/increase in the second). Portions in black represent the idealized behavior of a closed system under stable climate conditions. Green portions of the schematic represent the influence of FW fluxes from Greenland on parameters of the Arctic–NASR system. For this case, the new system is not closed. AT, SSS and FW stand for air temperature, sea surface salinity and freshwater, respectively. 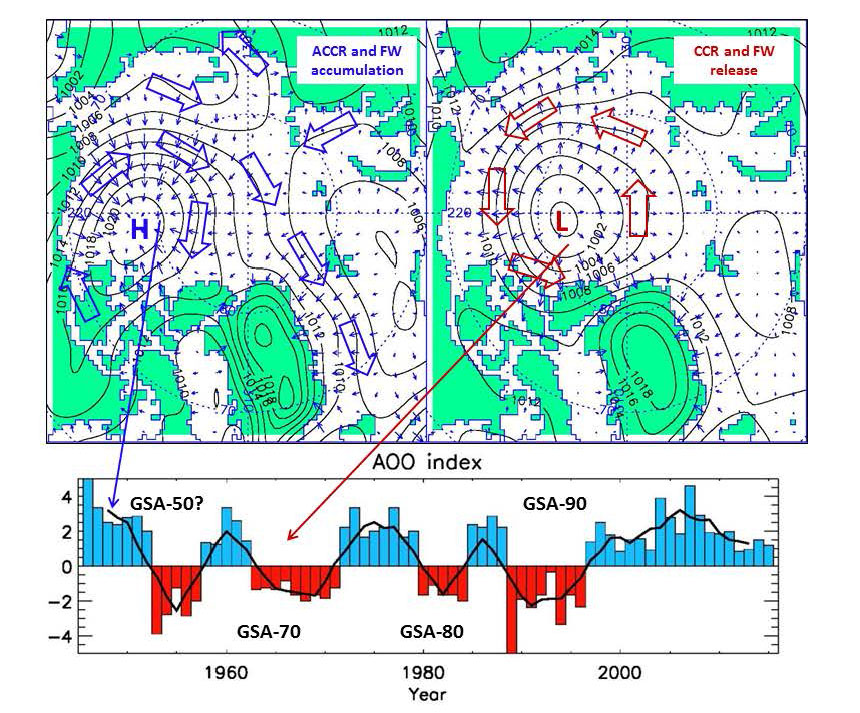 Figure 3. Duration of circulation regimes as simulated by the box model. Blue and red bars indicate ACCR and CCR years, respectively. Panels show model runs without (a), with observed (b) and doubled (c) freshwater flux from Greenland. The black vertical dashed line marks the start of the Greenland freshwater flux addition.