In the "healthy" oscillating Arctic climate conditions, the Beaufort Gyre system plays a flywheel role and stabilizes the climate of the entire Arctic region (Proshutinsky et al., 2002). These stable characteristics of the Arctic climate are well described by Proshutinsky et al. (2000) or in more details by Polyakov et al., (1999). In these terms, the anticyclonic and cyclonic circulation regimes or the Arctic Oscillation (AO) processes are more or less known and eventually have revolved routinely from 1940s to 1990s (Proshutinsky and Johnson, 1997; Thompson and Wallace, 1998; Rigor et al., 2002). The interdependence and relationships among atmospheric, oceanic and sea ice conditions have also been discussed by Dickson et al. (2000), Maslowski et al. (2000), Karcher et al. (2003), Häkkinen and Proshutinsky (2004), and many others. Proshutinsky et al., 2002, Proshutinsky, 2003 and Dukhovskoy et al., 2004 have speculated that these processes originate in the auto-oscillatory behavior of the system Arctic Basin (read BG) and GIN Sea (Greenland, Iceland and Norwegian Seas). Summarizing several hypotheses introduced recently in the publications mentioned above we conclude that the oceanic BG is a major part of the Arctic climate system and is responsible for:

a)    Regulation of momentum and heat transfer between the atmosphere and ocean
b)    Accumulation and release of fresh water or salt during melting-freezing cycle
c)    Redistribution of fresh water sources through involvement of the first year ice from the marginal seas into the BG circulation and keeping it there for years and transforming it into highly ridged and thick multi-year ice under converging conditions of the BG ice motion.
d)    Memorizing of the previous years conditions and slowing down variations in order to avoid abrupt changes
e)    Protection of ocean from overcooling or overheating (the latter is extremely important for polar biology)

The atmospheric flywheel (or its parameters: sea level atmospheric pressure (SLP) and system of surface winds over the Beaufort Gyre) is regulated by polar vortex and processes of the AO. Origin of these processes is not well understood but we assume that the variability of the atmospheric wheel of the system is influenced by sea ice flywheel (concentration and respectively albedo) and by ocean as a source of heat. In general, atmospheric conditions are more changeable than sea ice and oceanic conditions but at the seasonal and annual time scales we can interpret them as a conditional flywheel. Mechanically this wheel does not have inertia but thermodynamically it is driven by astronomic conditions which could be treated as a flywheel mechanism which provides energy during seasonal cycling and keeps this wheel working. In the "healthy" arctic conditions the atmospheric part of the BG is responsible for:

a)    Prevailing of anticyclonic system of wind stresses in winter (approximately 9 months) and very weak anticyclonic or even cyclonic winds in summer (3 months) for low AO and prevailing of cyclonic winds during high AO
b) Variable regime of air temperature with higher temperatures during high AO (cyclonic circulation regime) and lower air temperatures during low AO (anticyclonic circulation regime)
c)    Variable regime of precipitation depending on circulation regime. High precipitation during high AO and low during low AO
d)    Variability of other atmospheric parameters such as (cloudiness, solar radiation, humidity, wind speed). These parameters also change from season to season and oscillate from regime to regime.

Investigation of the BG climate system and its changes is one of the most important tasks of this project. 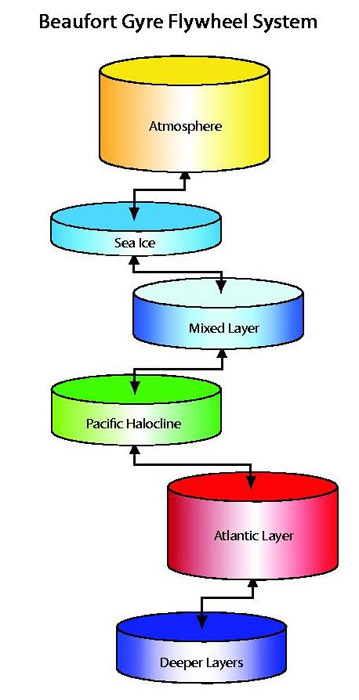