As part of the Beaufort Gyre Observing System (BGOS), several Acoustic Doppler Current Profilers (ADCPs) have been maintained at moorings in different locations in the Canada Basin since 2005 to measure upper ocean velocities and sea ice motion. The ADCP data have been analyzed to better understand relationships among different components of forcing driving the sea ice and upper ocean layer including: winds, tides, and horizontal and vertical density gradients in the ocean. Specific attention is paid to data processing and analysis to separate inertial and tidal motions in these regions in the vicinity of the critical latitudes. In addition, we describe the dynamic characteristics of halocline eddies and estimate their kinetic energy and their role in the total energy balance in this region. Ice-Tethered Profiler (ITP) data are used in conjunction with the ADCP measurements to identify relationships between T-S and vertical velocity structures in the mixed layer and deeper. Comparisons of mixed layer depth (MLD) determined from ITPs and ADCPs show MLD can be determined from ADCP data. We also describe the relationship between the seasonal cycle of ice thickness and sub-surface ocean velocity and its implication in a changing climate. 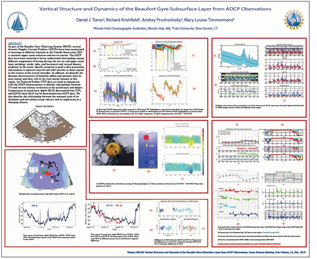